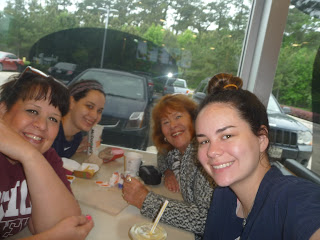 It would probably be better to call this past weekend, my birthday weekend, a LOVE and LAUGHTER Fest.  There was plenty of both.

I had made no plans for my birthday on Saturday.  On Thursday a message from my daughter, Julie, asking if I wanted to celebrate with she, my granddaughters, Jessica, Hannah and Emma was
answered with a resounding "YES".

It began early Saturday morning with me driving to Kingwood, about forty minutes from where I
am staying, and the FUN began............

First, of course, we stopped for sustenance for the LONG drive, ha, (three hours) to Austin!  COFFEE was at the top of my list and the others got their goodies as well.  The waitstaff took our
first photo of many..........and then, we were off.

One of the GREAT things was, I did not have to drive.  Beautiful drive and beautiful wildflowers.....
except it was raining, the wind was blowing and the temperature was dropping like a rock. 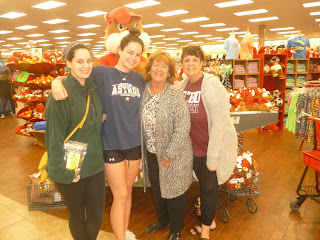 Next thing I know we are stopping at Buckee's - a glorified gas stop with a building filled with food, tschotkes, goodies and clothes.  My kids could not believe that I had never been to Buckee's!  I was astounded at all they had to sell that no one actually needs.  Yes, we walked out with two bags full of stuff..........Note the jackets and sweaters.

The manager saw us having so much fun and took this photo!

Onward we went.  The wind was blowing so hard there were whitecaps on the ranch ponds and steam was rising off the water!  I tried and tried to get a photo as we whizzed by - no such luck. 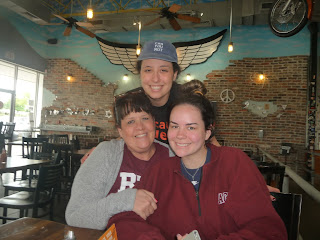 Next stop, Freebirds in Austin, where my granddaughter, Jessica, who is manager there, greeted us
with hugs and love.  Then someone took this photo of us all together! 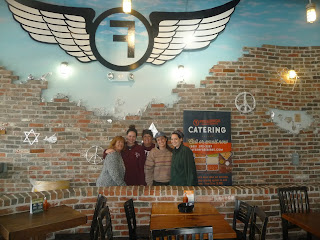 It is hard to believe that my whole family (except for Matilda and Sebastian) are taller then I!  I'm not that short........... 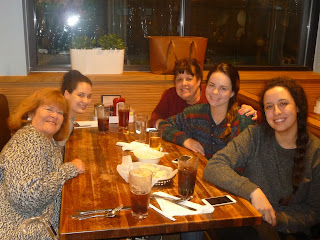 We managed to get out that night for dinner at Kerby Lane.  By that time it was 38F degrees....in April .....in Texas,  The wind was still blowing hard.  Gosh it was cold.  The great meal - lots of laughter and all kinds of storytelling capped off the night.

Somehow five of us managed to sleep on air mattresses, a futon and a bed in a small one
bedroom apartment.  More laughter, on Sunday.  Ultimately, we had to leave Austin.  Sadly we all
hugged, with me declaring it "my BEST birthday ever" and off we drove.  Back to Houston.  Whew,
what fun - what memories and what laughter.

I cannot imagine another birthday ever being better!  Thanks to my family, my friends and all the ancillary people (waiters and stander-bys) who made it all possible.

Glad you had such a grand birthday! Felicidades!

Happy Birthday! Glad you got to see some wildflowers though sad it was rainy and cold. And a visit to Buc-ee's! They certainly are monsterous sized gas stations/convenience stores.

What a great time, happy birthday Barbara! I have never heard of tschotkes, tried to look it up but no luck...

Thanks Bill. It was GRAND!

Scott - I still have not gotten over Buc-ee's! It was a wild and wooley, fun birthday.

Peter - Tschotkes is a Yiddish word for bric a brac or lots of decorative items. I may not have spelled it correctly. My spell check only gives me the word "pancakes". ha...

I'm glad to hear you had a great time. Happy belated birthday!

Kim G
Redding, CA
Where it's our niece's birthday today.

Every birthday should be a Hanukkah.

Thanks Kim and Steve for your well wishes. Thanks for commenting.

Feliz Cumpleaños, un poco tarde! I first wrote yesterday so I wasn't as tarde as I am now. I don't know why it didn't post.
Thanks for sharing your wonderful day, I loved your narration with photos that show the fun and love you all were sharing.
Lena J

Thanks Lena. Birthday wishes are welcome at any time! We did have a lovely day.