It started in 2008 with the designation of San Miguel de Allende along with Atotonilco as World Heritage sites.  It was a project that was worked on for several years to get the designation.  It
was and is an honor.

It did not seem, at first, to make a difference in our lives other then the excitement that we all
felt about this place that we called home and loved so much.

In about 2012, a huge tourist board campaign was started by the country and our state to bring
more tourism to Mexico and to San Miguel. 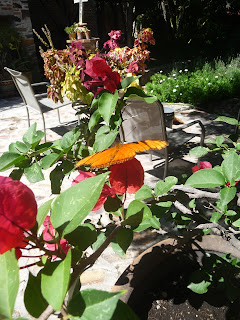 Fast forward a few years and the fruits of the Tourism Board's campaign began to be quite noticeable.

On weekends, starting Friday about noon, the traffic was streaming into town.  The cars jammed the narrow cobble stoned streets with an attempt to find a place to park or a parking lot or something.  The narrow cobble stoned sidewalks were filled with people attempting to walk on them and not on the streets.  Centro was becoming a mad house from Friday til Sunday night.

About the same time, Conde Nast named San Miguel the best place in the world to visit!  Most of us
were flabbergasted.   That is when the onslaught of people began to happen.  A couple of years ago. 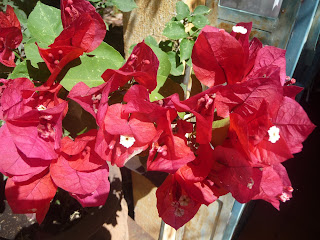 We locals were astounded and learned to avoid the crowds, if possible, and find ways to get around town without getting into the gridlock of traffic.  For those who must drive, this became a nightmare.  Add to that, the taxi drivers were muttering because with all the traffic, it was nigh on to impossible for them to make much money in a day as they were stuck in traffic most of the time as well.  Many a conversation that I have had with the taxi drivers has ended with them bemoaning the fact that another weekend was coming up.

The Mayor of San Miguel lauded the fact of increased tourism in the Atencion newspaper a week or so ago by saying that we, in this little village of 50,000 people, had over one million visitors in 2016 and the increase in 2017 was another 1.2 or 1.7 million visitors.  Giving us a grand total of over two million visitors!  It is a nightmare of epic proportions.

San Miguel is a very compact town that one can walk from one side to the other in thirty minutes.  When I could walk, I did it time after time.  Sadly I no longer can walk the distance, but trust me, it is very compact.  Can you imagine that many people in a town this size along with their vehicles?

The government keeps saying they are going to build parking lots on the outskirts of town and have trolleys or buses or whatever to get people into town.  This has been said for at least three years, if not more.  Nothing so far.

One of the great fears that the UN World Heritage Site Selection committee has is the loss of quality of life upon designation.  That fear, sadly,  has come to fruition in San Miguel.  Many of us do not and can not leave our homes from Friday to Sunday evening or Monday morning........

Hopefully someone in our government is going to "snap to it" and do something to rectify this mess.
Please.......

Times to visit when there is not that much traffic is April, when the Snowbirds leave.  Then for a couple of months, when people seem to think it is hot here, there are not that many tourists.  Times not to come are Easter, Independence Day,(September 15th), Day of the Dead - October 30th to November 2nd and Christmas from December 15th til January 6th which is Three King's Day.  That is, unless you like big crowds.

Do I still love San Miguel as I start my eighteenth year here soon?  Of course.  But, I would like to see it be livable again for those of us who live here along with being more enjoyable for those who visit!

Sounds like they are busy paving Paradise, but forgot about the parking lot! Frankly, given the ease of getting to SMA by bus and the ease of getting around SMA by foot, it seems kind of ridiculous to drive there. But that's the price of rising incomes: more people have cars.

Let's hope that the city finally gets some kind of solution worked out. Sounds like it's getting crazy.

Kim G
Redding, CA
Where mother keeps asking if there's a lot of traffic when I come home, and remembering "real" traffic in Boston or CDMX, I never know how to answer.

Hey Babs,
So true. When you find something nice or a good deal, it's hard to keep it a secrete and next thing you know the crowd is in and you're out.
My friend was moving to Mex. permanently. I told her come check out where I'm staying, it's nice. They were rehabbing one of the apartments that I was going to reserve the following winter. She took it.
Ajijic wants to be a MAGICAL CITY. Oh oh.

You are right Kim, but with the growing middle claaa and their new cars, heading out of town to visit someplace else must be wonderful.......

There are many places in Mexico that are difficult to get to by bus......I've done that in the past. Sure wish I did not need a car now to get around....it is really aggravating! I miss walking down the hill.

CDMX is beyond describable - even in the 70's it was a nightmare as far as traffic goes!

I remember Ajijic and Lake Chapala in the 80's when it truly was a paradise. It looked like Hawaii or something. Very, very few expats and NO traffic.

Hold onto your hat if Ajijic getes the Pueblo Magico designation......too bad.

I actually have a little beach village in mind to escape to - there is not even a sign on the highway to show you how to get to it..............my kinda place. We'll see.

Many medieval towns in France and Itlay have banned cars in the old town centres. Large three or four story parking lots have been built outside the old town walls. It makes for a much nicer and peaceful old town. The centre is open to delivery vihicles at designated times only. It is so much nices to strool the town withour traffic. We loved San Miguel but I don't think we could live there...

There are many places in Mexico that the centros are pedestrian only like Europe as well as in Guatemala. In Antigua they have little tuk tuks to take you into town which is fun.....

I LOVE living here and have never lived anywhere where the weather is as good as here except for January, ha. I'll get over my snit after the 6th of Jan when everyone leaves town again. Ha. PLUS, I could never have the lifestyle anywhere else that I do here with the low cost of living. Our "winter" here this year has been amazing, so far, except for 3 cold days! And, of course, the people here make the town such a joyful place to be............Come back again sometime.

As soon as I started seeing notations to SMA in the travel stories I knew exactly what was going to happen. The town I was from in Ncal, got the same way, to the point where locals can no longer go on the weekends for fear of being either run over by drunk tourists that have been visiting all the wineries or wine tasting shops that have taken over the town. Now that the town is popular, the restaurants have raised their prices at least by 50% so locals can no longer afford to go out like before, the only positive thing is the merchants are happy and real estate values have skyrocketed.
I am afraid that our town here will at some point suffer the same situation although not as drastic as SMA or Chapala. But I'll probably be dust by that time, Happy New Year to you!

Unknown said...
This comment has been removed by a blog administrator.
3:53 PM

You only mentioned the traffic... what about the increased crime! So bad there now. What about increased prices? No no no... I lived there 2012 until 2016... Traffic.. Pollution.. Crime.. High cost of living.. And pretentious eating venues. No Thanks. I am in Thailand now.. I miss mariachi music and NY freinds. Nothing else.

I don't understand why expats bemoan the crowds and post " best times to visit" comments. That seems a bit .....confused.
Ajijic and Lakeside at Lago Chapala has experienced the same situations you describe in SMA.
Went from a really neat place to live to a real mess in about 3 years.
Seems like those who find paradise start pimping it and ruin what they loved when the crowds arrive.
BTW....the term Gringo is not one of endearment. Wonder why so many of us promote it's usage?

Tancho, it is a Fact, sadly. The new chef driven restaurants are more expensive but we still have the "locals" places......a good, full meal for about $10USD. Thankfully.

John Arnold. I have not noticed pollution and I live up on a hill overlooking the And I still live on $1500USD a month........so I guess after 17 years I'll just deal with the issues and stop complaining. It still is nearly paradise.

Well Bob Inman, I or my friends don't promote SMA. It is the paid PR people as I wrote who do so..........Gringo or expat? I prefer gringo......or whatever. Yes, I spent time in Lake Chapala and Ajijic in the early 80's. It truly was a paradise as well. Thanks for taking time to comment.

Same thing has happened on Isla Mujeres. They promoted the hell out of it and now the pueblo doesn't seem as magico. Long ferry lines, traffic jams, no place to put a chair down on Playa Norte, stressed infrastructure with power and water shortages. No bueno.

Bec, I have not been to Isla since 1978. I think I want to keep that memory fresh in my mind.....as I know it, nor Cancun is what it was back then, sadly.