Millions of Monarchs in Migration 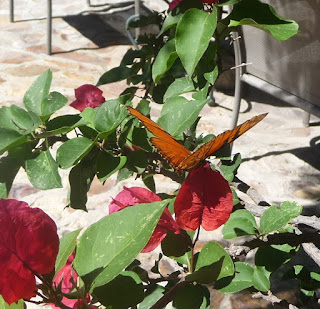 The news is GOOD!  About 160 MILLION monarchs are expected at the sanctuaries about 2 1/2 hours south of San Miguel the end of October and into November!  That is three times as many as last year.  Could it be that people in Canada and the USA are planting lots of milkweed and other plants that monarchs feed on?  I hope so. 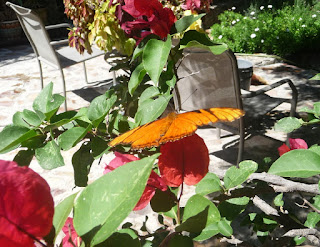 In the first two photos is a butterfly who greeted me right outside my kitchen door two days ago.  Then yesterday there were literally hundreds swooping and landing in the garden.  The sun was warm and there was no wind.  Two things that butterflies seem to thrive in.  As those of you who read my blog know, I keep little saucers of water hidden all over in the flower beds and the butterflies often can be seen dipping into the water!  The other thing I notice is that they love the bourganvilla which is now blooming in profusion.

In Houston, my daughter Jennifer was a "butterfly" gardener.  It even said so on her business card.  She and her son Christopher delighted each time they saw a chrysalis and watched the process until a monarch emerged.  Here she is with one that landed on her face!  I treasure this photo.

Having traveled to Chinqua, which is the nearest sanctuary to San Miguel is awesome.  No words can describe the wonder of seeing the trees covered with monarchs.  When it warms up a bit and the sun comes out, they flutter their wings and take flight.  The sound, yes, you can hear them, is a whoosh.........of wonderment.

These three photos are at Chinqua, the least visited sanctuary, as there are not accommodations to  stay there and so it is a "go down and come back""in the same day trip.  Well worth it.  The last time I was there, I don't think there were ten other people there. 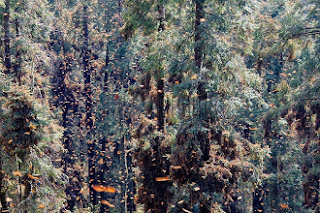 You must ride horses up to where the butterflies are, which is at 10,000 feet.  Again, awesome.

The monarchs are at the sanctuaries from November til around the first of March.  They usually come
back through San Miguel as they head north and feast on the lavender colored jacaranda trees.

The indigenous people believe that when the monarchs arrive that it is the returning souls of their departed.  It is around Dia de los Muertos.  Day of the Dead.

Alejandro and I have been talking for some time about taking a weekend trip to see the monarchs. Perhaps this winter we will finally get around to doing it!

Don't go in December of January as they don't fly or move if it is cold........so wait til the middle of February when the air has warmed and there is sun. It is beyond amazing.

This year I saw more monarchs in my suburban Chicago back yard than I ever have before. 25 years. To help the monarchs, Illinois is only mowing 15 feet from the highway, leaving more wild plants.
Nature is making an astonishing comeback around the city. A hawk landed on a branch above my head in my backyard a couple weeks ago. People have seen eagles around the creeks and rivers.
I got a couple of wild milkweed that popped up along my driveway and I planted some seed in my garden. Monarchs lay their eggs on it.

I'm headed down to lake chapala in a couple weeks. I might try to get to the sanctuary.

So pleased the count appears headed back up this year. A few years ago, they were tagging monarchs at the Montreal Botanical Garden while we were there. Flying back to Texas in a jet seemed a long way. So amazing those delicate creatures fly that whole distance on their own. https://postcardsfromsanantonio.com/2012/10/03/monarchs-from-montreal-headed-for-our-milkweed/

Crynoutloud - What great news. Wonderful to know the state of Illinois is helping the cause as well. Milkweed makes all the difference. I actually don't have any in my garden, but I have salvia and the bourganvilla along with carolina jasmine which feed them. I have not found milkweed at any of the viveros here. Do try to get there if you can. There should be some already there - not the largest amount which is there by the end of November.....

Postcard - What is so astonishing to me is from the time they head North each year and return to the sanctuaries is SIX generations! That boggles my mind. Isn't it hard to wrap your head around that information?

Thanks for the tip on when to visit the sanctuaries! We will be staying in SMA in January and early February, so will plan on visiting the closest sanctuary at the end of our stay.
As for milkweed, you may be able to order seed. Worth a try to look!