Life is always an adventure - even in the air! 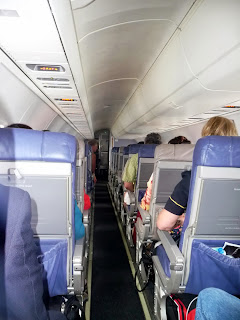 Yes, indeed, you can think you know everything (I actually never think that) and then a left curve hits you right between the eyes.

Take yesteday as an example.  Even while I was going through it, I was giggling inside.  You see, if anyone thinks they are in control of their life and destiny, think again.

All it took was a gigantic downpour with lightning strikes and thunder to change the face of a simple two hour flight back to Mexico.

I arrived at IAH, Houston Interncontinental Airport, amid sunshine.  By the time I had finished removing things from one suitcase to the other to handle the odious 50 lb limit and then gone through a radiation and body frisk (sorry, not fun) the skies had turned ominous.  I wasn't aware of this until I had walked down the black tunnel of the airport to B79.  JACKPOT.  I would stare at that gate in anticipation, exasperation, disappointment, delirious exhaustion and finally relief for seven hours!

You see, when the rains came, it shut down the airport for about 30 minutes.  The resulting chaos of pacing people, spontaneous eruptions of children and just general nuttiness took over.  I enjoy watching people.  This was a field day.

I watched people just plop down on the floor, spread out their stuff, even though it was in the pathway and ignore people walking around them.  I watched small children sleep through it all.  Those were the lucky ones.  I saw no anger or rudeness, amazingly.

Finally we got down to business and left through gate B79 - an hour late.  But, not bad.  Aaah, but then there were 22 planes in front of us.  Yup, we spent another hour on the flight line, waiting.

We finally took off for Mexico - YEAH.  Skies were not clear so I didn't pay too much attention to our flight path.  After an hour, which I assumed we had to be close to Saltillo or thereabouts, the flight attendant announced that we were turning around and returning to Houston.  WHAT? 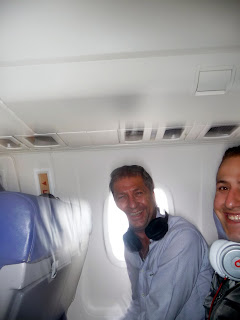 By this time, we were becoming giddy and laughter broke out amoung a few of us.  A very few. 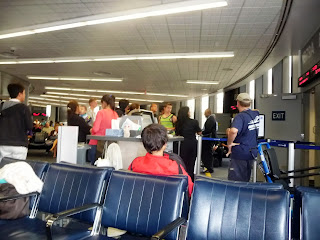 Yup, here we were right back where we started.  B-79.  The guy in the right side of the photo was the A&P mechanic who fixed the problem and then hung around to watch things.  Once they announced the plane was fit to fly, we all sighed with relief.  By now its around 6:30PM.  Oops, we're not going anywhere because the flight crew has "timed out" and there is a need to find a new crew!

Is there a place where crews hang out?  Obviously not, as it took 2 1/2 hours to find them, wherever they were.

The wise decision was eventually made to NOT reuse that plane but to get another.  Really?  Another delay as luggage was moved, etc.

We were given $10 vouchers for food with instructions to be back in thirty minutes.  I didn't move.
I stayed and kept an eye on B-79 where the Leon-Guanajuato sign became Witchita, Biloxi and various other destinations.  Each time that happened we all just looked at each other.

By 8:30 we were beginning to think that this ship wasn't going to fly!  But, with calmness and perseverence it did.  We flew out at 8:45PM and touched down at 10:45PM.  Applause were heard throughout the plane as we took off. Sighs of relief as we landed, safely.

So, what did I learn?  Not to get excited.  To try to see the humor.  To converse with the people around me.  The A&P mechanic graduated from the Rice School of Aviation near Hobby airport.  The owner and his wife have been friends of mine since the mid-70's!  What a nice surprise.  So we talked for a while.

I met someone who has lived in San Miguel for  17 years.  We had never seen each other before!  He travels with Doc Severinsen and performs.  I was thrilled to hear that Doc will be back in San Mgiuel and performing this summer, at the ripe old age of 86.  You would never believe that age when you see and hear him.

I enjoyed a super conversation with a couple who live in Yuma, Arizona.  They were headin to Leon and asked ME how to fill out the customs forms for entry!

I also learned to never travel on a Sunday again - especially when it is the first weekend since school has ended for the summer!

See, you can teach an old "dog-ette" new tricks.

I would not have imagined -- not for one moment -- that any of this would upset you. I once saw you when you described yourself as furious, and you seemed as charming as you always are. The rest of us could learn from you.

Babs,
I am a rabid Doc fan, and if anything comes up in Attencion regarding play dates ( especially if a reunion with Gil y Cartas is in the works) pls let us know.. I'd luv to catch another show. They make/made fab music!!! As to the travel hassles, did you fly into QTO or Leon? Seems a relatively brief trip from the airport to SMA ... Looking forward to more in town updates!
Cheers,
Dan in NC

Good reason not to fly in those contraptions

Your story is one of many that has ended my flying 'career'. If I cannot get there by bus, train or car - I am not going. I flew too many miles in my youth - some years ago I vowed, "Never again!"

Wow, Steve, what a nice thing to say. I really try to stay centered and not let things get to me. IF they do, I try to handle it in private cause why take your bad mood out on others.....

Dan, I'll keep you informed on Doc. He is not only performing here but moving back. Gil & Cartas no longer play together but one of them tours with Doc all over.
I flew into Leon. I must say the flight up, on a Thursday, was totally perfect. Shuttle to the airport, hop on the plane, get off, hop in another shuttle and it was all done in a total of 4 hours! So, one out of two isn't bad........

Calypso and Tancho - I have to confess after making that drive at least 50 times alone in the car, that the trip up by plane was absolutely wonderful - the one back home, not so much.......BUT, it was fodder for a blog post.