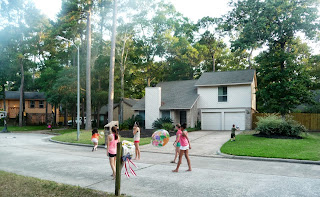 Yes it is.  Weather wise and real estate wise.

There are so many new jobs in Houston from companies moving in and the oil business going through the roof with fracking in the Eagle Ford Shale and others, that it is a sellers market. Lotsa people and not enough homes to sell.

I had read an article in the Houston Chronicle about homes going on the market and selling in DAYS for more then the asking price. I wondered if that were true.

This photo was taken of my granddaughter's belated birthday party where the girls were playing kickball, volleyball and other games in their cul de sac.

The house behind them went on the market, I think on a Thursday or Friday, and had a contract that weekend.  Not only that, there were multiple offers.

The house with 3 bedrooms, 2 1/2 baths was on the market for a mere $110,000 and sold for more.
Although the front yard looks small, the back yard is huge.  Big enough for a pool or whatever.

I have many memories attached to this house.  It is where my former son-in-law and my grandson lived after my daughter Jennifer passed.  It was a house of new beginnings as they have moved on and it was time to allow  someone else to enjoy and love the house.

A funny memory came to me as I toured the house a couple of weeks ago.  A funny cat that had been my daughter's lived there.  Her name was Belly.  Sheer curtains hung at a side window.  Belly used to sit behind the sheer curtains thinking no one could see her.  Black and big was Belly.  It still makes me smile to think of her.  Other sweet memories of my grandson doing a science experiment in the backyard and trying to replicate a volcano.  He did!

Now as far as Houston being HOT weather wise.  It was extremely pleasant almost the whole time I was there.  It was the last week that the humidity rolled in and I knew it was time to head out for the mountains of Mexico with cool, cool temperatures.

Phoenix is supposedly the same way. Temp-wise and real estate! Our house has been on the market 30 some days. I'm told it's because it's in a higher price range and wages in Phoenix are low. It's really picked up in the last week with 7 showings in 8 days, so keep your fingers crossed. I think the houses below $300,000 are selling very quickly.

Seems like houses in Mexico are more expensive than in the U.S. these days -

Beck, believe it or not - in Houston the houses over $3 mil are the fastest selling, I'm told!

And yes Calypso, I was shocked beyond words when I came to SMA and saw the prices that the American realtors have on their listings. The secret is to work with a Mexican realtor, but, don't tell anyone I said that! There are still places under $100,000 in SMA that are very nice. Surprise!

Summer hit us here in Melaque over the weekend. Heat index of 102 -- a lot of that due to the humidity. I may need to give my new Escape a mountain road test before too long. Our really hot days are still a couple of months away.

Gotta love the rain we've been getting the last few days. Temperature is down, dust is down. It's gorgeous!

Steve - the guest house is rented July and August, but September is available and that is the Chamber Music Festival time..........just sayin' I remember that August was always the worst with Sept. not far behind when I was doing design work in PV. In fact in PV, lotsa stuff closed in August - don't know if it still does.

Shannon - I"M loving the rain and so is the garden. I walked through all of the areas today. Even roses blooming on the roof terrace of the guest house!