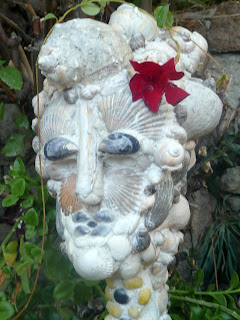 IF the truth be known, I don't go to Doctors until I'm convinced that it is probably fatal.  I will put up with pain and aggravation for months, or longer, then give in when my home style remedies don't work.

Case in point.  In February a huge pimple, more like a wart all of a sudden appeared between my nose and lips.  I was in Houston.  About to meet some new people and I thought, "Oh great now I'm getting ä witches wart".  So I doused it with antibiotic ointment and, of course picked at it.  Nothing worked,  it never went away.  I was somewhat self conscious about it.  Then last week someone said that I really needed to have that checked by a dermatologist.  THAT got my attention.

Add to the above that weird things have been happening in my legs and feet with tingling and pain in the middle of the night.  So severe as to wake me with the pain.  I, of course, was scared to death that it was diabetes.  Monday night was especially painful and I was awake most of the night.

Okay, NOW I had two things to worry about.  First thing out of bed on Tuesday morning I called the dermatologist and the internal medicine doctor for appointments.  Hopefully for that day.  They are in the same clinic here in town and I thought a one-two punch was the way to go.

When the appointment is at 11:30AM, the door opens and there stands the Dr. to greet you.  Dr. Barrera is a gruff but brilliant diagnostician.  He never remembers my name but he always remembers the last time I was in there and why.  Amazing!  He listened to me, wanted a couple of x-rays and walked me down to the x-ray department to check my spine to see if that contributed to the pain in my legs and feet.  Two x-rays in ten minutes.  $40USD.  Dr. Barrera looked at them and said nope that wasn't it.  He gave me something for pain and said to call him in 5 days.  He also ordered a lab to come to my house to draw blood to check what might be out of whack to cause the pain..

Then I went off to meet the dermatologist to get the witçhes wart removed.  Shockingly she told me it wasn't a pimple but a tumor.  Whoa!  And, I needed to get it removed either by her or by my dermatologist in the USA, soon.  I left her office in a fog with the name of the tumor.

Cost of appointments with internist and dermatologist - Total for 2 - $88.00USD

Called the US Doctor - Told the receptionist the diagnosis because the Dr. couldn't talk to me and no he would be too busy to call me back!  No, they don't take Medicare anymore.  And, the cost for the surgical procedure to remove the tumor would start at least at $250USD.  And, he wouldn't be able to see me til the end of May even though it needed to be removed ASAP.

Multiple emails to dermatologist here in San Miguel which were answered promptly and her cost to do the procedure in two days, convinced me that I should move forward here.  I did, today.  It's gone.
Cost of surgical procedure and biopsy of tumor - $200USD

The lab tech who came to the house to draw blood was, without a doubt, the most efficient person I've every dealt with in this area.  Usually I laughingly tell the tech they have 2 maybe 3 chances then we'll quit.  This man found the vein instantly.  Did not leave a bloody trail or anything.  I was thrilled.
Cost for coming to my home and for the  lab results - $56USD

After I finished with the surgical procedure today and left the dermatologists office, I stopped by the internist.  He welcomed me into his office, told me all is ok except one thing and gave me a prescription for that.  I asked if I needed to pay for his time and he looked shocked and said, "Of course not".  I told him I was going to Texas and he gave me his cell phone # in case I were to have any questions or issues while I'm gone.

As I walked to the car, I was shaking my head (with the bandage on my face) with wonder at the genuine caring, professionalism and lack of interest in always making money.  In fact, the price that the dermatologist had quoted me and what she actually charged me was less. I told her what she had quoted and she laughed and said, "Well that's why I'll never get rich - the patients mean more then the money"  Yup, she actually said that...............and I believe her.

Total cost for everything Tuesday and today - $384USD!

I got news for you. The $250USD for the service in Texas is way off. You would be lucky to first, get in to see the doctor in some reasonable time, and no procedure is that cheap.
That's probably what his premium for his malpractice insurance.
I experience has been the care and level of service SOB has been better and more satisfying then NOB.
Hell, even our vet down here, gives me his cell phone number and calls after a few days to check up on our dog.
Service like than is decades gone NOB.

I agree Tancho. Vets here are wonderful also.
When my dog, Flash was hit by the bus, the vet personally came with a stretcher and two employees to get her. I asked that he cremate her and when I went to pick up the ashes they were in a colorful basket with many colors of tissue paper. I HAD to smile!

I am glad your good news spiked the bad news before it had time to register with me. I was thinking about you last night as I looked across the bay at Cuastacomate.

I'm glad you took care of the tumor NOW.

Billie - Luckily when I tried to call you on Tuesday you weren't home. I was freaking out, but, then I got over it. I'll tell you about it when I see you.....I'll have you doubled over laughing!

I guess you will be wearing lots of fashionable hats from now on?

My hair is so thick that I never wear hats cause my head gets to hot. BUT I will start using sun screen and NOT sit in the direct sun, for sure.
Darn.

Who was the dermatologist? I need one today, found an irregular shaped mole on my leg.

I am coming to San Miguel next week to visit a friend and want to check into aesthetic dermatology treatments while I'm there for some telangiectasias my doctor said should be treated by laser. Do you know if this is something Dr. Archer does, and if not, do you know of another dermatologist who does? Thank you kindly for your time.

Margaret, I'm sorry but I've never seen or heard that word. Hence, I have no idea what to tell you. I would suggest you call and talk with Dr. Archer. She used to practice in Mexico City and if it is not available here, she'll know, I presume, where whatever you're talking about could be accomplished.

In the past 6 months, I have had two major surgeries here (one in Celaya, one in Querétero)--- my most recent being spinal surgery. http://www.losogradysinmexico.com/i-had-spinal-surgery-in-mexico/

Very grateful for the ease and affordability of care here.

Glad to know you were in good hands too!

Thanks Katie for posting. I'm so glad you gave me your blog address so I can read and keep up with you and your journey.

I'm impressed with your courage and determination.

I also, have really been enjoying reading about your adventures here in San Miguel and yesterday shared your piece, Medical Care in San Miguel, on my Los O'Gradys in Mexico Facebook Page.

As you know, medical care questions are at the top of people's list when it comes to considering a full or part-time move to Mexico.

It is good that there are folks out there, like you and I, that write about it and share it publicly!

Cheers and hope to run into you on one of these beautiful cobblestone streets!

Hi Katie! Appreciate finding out that you are here in San Miguel. I couldn't really tell when reading your blog. I'm so impressed with your courage and determination.

I'm not in centro very often, but, usually try to be on the bench in front of the Parroquia on Fridays from about 11 - 12:30 then go to lunch. I won't be there this Friday, but hopefully one of these days.

My email address is babsofsanmiguel@yahoo.com if you want to stay in touch without corresponding on the blog.