In Just One Day 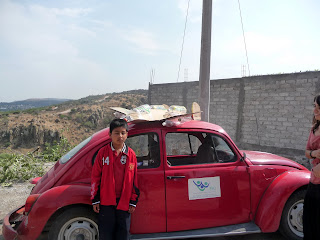 As I've mentioned before, once I walk out the gate into life outside my paradise, I never know what to expect.  Last week it was the 100's of workers out on my street.  Thankfully, the project was completed yesterday - just as I was told on Friday it would be!  A miracle.

Last Friday this little VW pulled up to the school.  The Mom and son jumped out and then came out an airplane made with recycled cardboard and recycled soda pop bottles.  It was huge.
I had to grab the camera, ask permission for a photo and then show it to the Mom and son.
They graciously smiled. 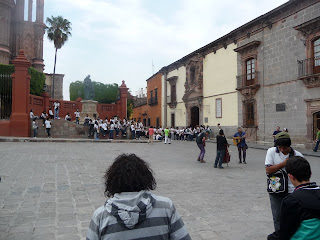 Going down the hill and arriving in the jardin, there were lots of school kids here on field trips - just like they do in the US toward the end of the school year.  Never to miss an opportunity, a three piece band appeared to sing, make music and collect tips.  The kids loved it and an impromptu
"happening" happened.  Not too unusual here. 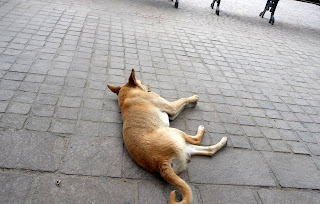 Through it all, this dog that my son had petted, decided I was its savior and never left.  It laid in front of me until I left.  What I love about this was that everyone walking by walked around the dog and the dog never seemed to worry that anyone would step on him. 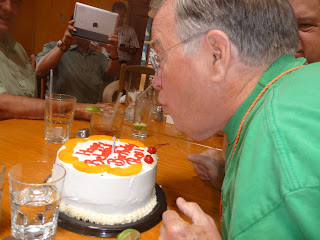 Onward to a surprise birthday party for my friend Ron.  It WAS really a surprise as
his real birthday was in February but due to circumstances, the party didn't happen until
he walked into the restaurant and a bunch of us were gathered waiting to yell "Surprise" at him.
I WISH I had gotten a photo of the multiple looks that crossed his face in just a few seconds.
Priceless.

All of the above happened before 1PM.  I'm not even going to wear you out telling you about the rest of the day. It was a doozy.

I am lucky these days to get one thing done. After a week of trying, my car purchase money is still sitting in Los Angeles. And after sending five revised forms to get it transferred, I am no closer to climbing behind the steering wheel. My string of lucky financial events may have just run out.

Good grief! I can't understand that. I wire transferred money as far back as in the 80's before all the fancy stuff. It was always there within 48 hours. Call that bank and ask for the International Dept (the one in the USA) and tell them to get it straightened out.....
Ridiculous.(Ok, that's Barbara the Business woman talking).......