"Goodies for Matilda and Sebastian" 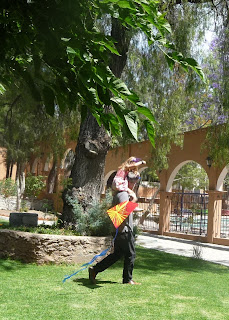 Yesterday was the day that I got to spend a little time with Matilda and Sebastian.
I always go with some goodies in the goodie bag.  AND they know it! Sebastian was thrilled that his kite had a dragon and Matilda was thrilled that hers had a sun on it! 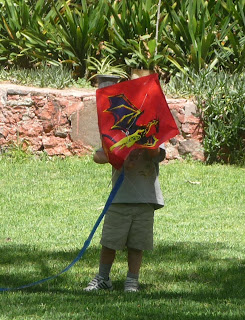 This time, I had a box of sidewalk chalk, a tiny tractor for Sebastian along with a spoon from my kitchen as a shovel and kites.  The kites won. 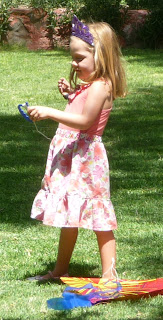 Although we drew with the chalk and Sebastian dug a little in the dirt, running through the grass in hopes of getting the kites in the air was the "funnest" thing according to the kids. 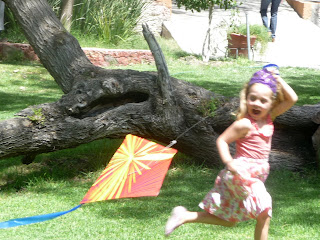 Initially Mati couldn't get hers up so her Daddy put her on his shoulders and they ran and ran until it got up sorta in the air.  I love the photo above of her exuberance when she looked back and saw it rising slightly into the sky.  Of course she had to have her purple tiara on to accomplish this! 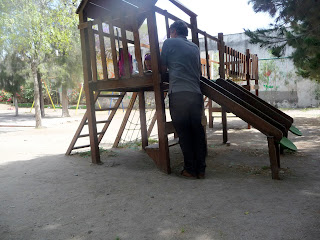 The last photo was taken by Sebastian with my camera.  He is totally fascinated by it and often I let him take photos.  His biggest problem is having his left hand over the lens.  But, today he did great and took two photos of his Daddy and Matilda playing in the little jungle gym where she likes to go to color pictures in the coloring books that I bring.

All in all, a couple of joyful hours to lift our hearts!