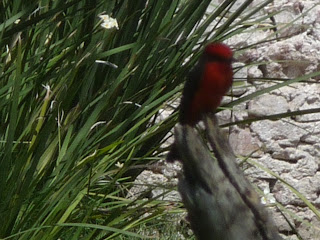 In the past it has been extremely difficult and aggravating to comment on a post of mine.  I've had many complaints.  It was a combination of letters and numbers that were extremely difficult to see at times.  Several people said they tried more then once and gave up.

Then yesterday a fellow blogger and friend, Calypso, sent me a blog that told exactly the steps to take to get rid of that irritating screening system.  It worked!  THANKS Calypso.

Now I hope I'll get lots of comments.  Some days there are over 300 views of a post but maybe one lonely comment.  Hopefully that will change.

The other nice thing is that I don't have to review the comments and then send them to the blog.  So, if I'm traveling or can't get to the computer for a few days then the comments will still be there.  Cool!

A couple of weeks ago two fellow bloggers were in town.  I managed to meet with both.  It's so interesting how you feel like you know each other so well from comments and posts when in fact, only by the written word is there a friendship.

So,"let 'er rip" as they say.  I look forward to hearing from all of you.

Was waiting for a prompt (cursor) so I could post and see what you did ... didn't show.

I decided to use Disqus and it seems to work. Now to press Publish

Just had to try it! I know on a lot of blogs it takes three tries or more for me to post. I took the word verification off on mine for a period of time, but went back to it after a huge amount of spam.

Alright, let's see if this works! I have not commented on a number of blogs I read for a while due to the aggravation involved in getting through the "security" stuff that was set up by the owners after going to a new format.... I do the vast majority of my reading on an iPad, and look forward to commenting again.
Cheers! ( it works!)
Dan in NC

Dan, I was just thinking about you the other day and thought, "Hmmm, haven't seen him on FB nor has he posted"! Glad to hear from you and know all is well......

Sparks - the instructions say as long as a Registered User. I'm told there is Spam control. We'll see!...

Hope this works for me, I've been reading for ages but can never seem to comment. Love your blog.
Cheers
Shelagh

Shelagh - Thanks for posting a comment. Please come back again and again!
Beck, I can't believe you're in Isla and took time to post! Enjoy.

I can never tell which posts will generate a comment on my blog. I wish I had more of them, too. Seems my more inward, ponderous writing doesn't leave readers with much to respond to. More newsy posts have a better chance of generating discussion, which is what this is all about!

Lee, this is the most comments I've had in a long time. I guess that darn security thing was a big deterrent.........Good to hear from you again!

Hallelujah! You're right, we do love comments! Now it much easier to do so, thanks Barbara.

Just had to give it a shot.
Keep up your wonderful writing about SMA and you charmed life, we love it.

Thanks Rick for commenting. Will keep writing if you keep reading.....

Works. Love reading your blog it takes me away from the daily grind in such a happy way

I'm thrilled and amazed at all the comments. Especially from someone like you that I didn't even know was out there......COOL!
Thanks for posting.

Those number letter things are so annoying! I hope your spam stays under control! I have had good luck in allowing all comments except "anonymous"

Croft, its amazing how removing that required letters and numbers has increased the comments! I too hope there is not much spam. So far so good.

Yes I was one of those people who tried many times to post but couldn't. Yeah! I will start posting comments now.
Cheryl