WHAT is going on? Daniel Rueffert, that's what. 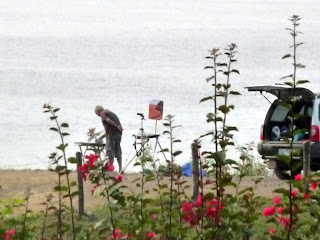 While at the beach, just two months ago, an artist appeared on the horizon.
He purposefully opened the back of his car, set up his easel and palette table, did a little
dance and started to paint. My friend John and I, who had binoculars watching for whales began to watch this man.
Who is he?  Is he really an artist?  Or just a person that found a place to paint for the
fun of it.  I don't think he had any idea we were watching him for at least 20 minutes. 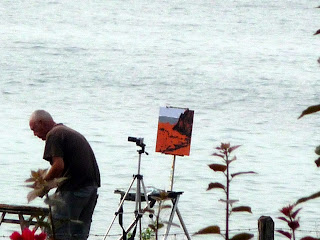 I could stand it no longer and headed down the dirt path to find out
for myself.  As I drew closer, I saw a small video camera recording his
painting.  Aha.  I hesitated to interrupt, but, he seemed open to that and we talked for a bit.
I introduced myself with my name.  He didn't, at first, say his name. 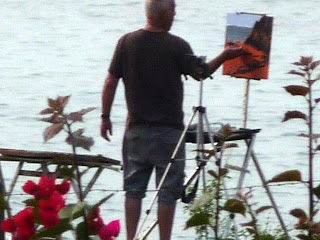 Had he said it at the beginning I wouldn't have been as relaxed as I was asking him all kinds of
questions.  He patiently answered all of them.  Then I think I said something about heading back home to San Miguel soon and he said he painted there and had a gallery in Mineral de Pozos.  He no longer, if memory serves me correctly, has a gallery in San Miguel de Allende.

CLICK!  I knew instantly who he was - Daniel Rueffert, one of the most admired and talented artists who paints scenes of Mexico, among other things.  I have great respect and admiration for his work.

I briefly owned a piece of his many, many years ago and deeply regret that I let it go.  Long story.

I'm so glad that I got these photos of him at the beach!