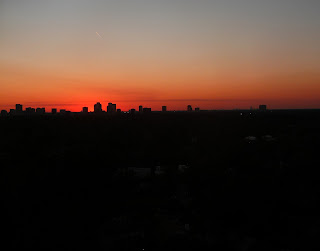 Usually, I'm looking forward to the beautiful drive home - especially once I see the mountains
just north of Monterrey.  For some reason, this trip I had a sense of dread, without reason.

I had turned in my eleven year old permit sticker to have my car in Mexico with the intent of getting a new sticker.  The rules have changed somewhat and I didn't want any hassles.  As I found out, however, when I did turn in the old permit, it was still valid and it was not a necessary thing to turn it in.  I did anyway.  Eleven years ago I paid $2.58 US.  I didn't ask for a refund, ha.

Any business that I need to do at the border, I do on the first day before I attempt to cross on the second day with the destination of San Miguel.  That way, if ever there would be a problem, the delay wouldn't be in the time I would be traveling as I always spend the night in Laredo.  I then cross the following morning at around 7:30AM with an estimated arrival time in San Miguel de Allende of 4:30.

I've never had a problem at the Columbia Bridge checkpoint.  It is northwest of Laredo and accessible from Hwy 35 with a huge sign.  This time was no different to get a new temporary import permit.  My concern was because of all the postings on the San Miguel Civil List.  Some had reported that you could no longer get a car permit if you were anything other then a tourist.  I was a little edgy.  I don't know why I ever pay attention to those postings.  Seldom has the information on their been valid.
I wasn't even at the checkpoint for longer then 15 minutes.  I showed my FM-2 at Immigration where I was given an FMM just like when you fly in.  Then I made copies of my Title, my FM-2, my Mexican and Texas driver licenses.  Took that to the Banjercito window.  The woman did stuff on the computer.  Took my credit card and charged $200. US for the permit.  She gave me the sticker to put on the windshield, the paperwork and I was outtathere.  A parking lot attendant took the sticker and affixed it to my window.  Done deal.  I also read the big poster on the window of Aduana about the temporary import permit.  As long as the FM-2 or FM-3 is continuous your permit automatically carries forward just as before.  Nothing else you have to do.  Just as before.

The next morning as I prepared to cross the border, I have a ritual.  There is a service station with full service and I ALWAYS stop there to have them check the tires and whatever else under the hood.  That guy, nor anyone else, was there that day so I reluctantly went to the Nuevo Laredo border crossing and did cross.

The system is green light - you go on.  Red light, the Mexican customs people want to check your car.
I got a female customs agent who didn't even greet me.  Highly unusual.  They are usually extremely polite.  So, she opened the back and said I needed to take everything out.  I knew that wasn't going to happen.  I pleaded ignorance as to what she was saying and off she went ..........she just left me standing there.  I assumed she had gone to find someone who spoke English.  There was so much going on and people all over the place, that I couldn't spot her.  After waiting a few minutes without anyone coming up to me, I just closed the back - got in the car - and drove away.  Nope, no one came after me.

At the 16 mile checkpoint, again I got a red light.  That man spoke English.  He said I needed to pull over.  I told him that I had just had a red light at the border and that they had inspected the car.  He then told me to go on and I didn't have to stop.  Yee ha..........

An hour into the drive, still north of Monterrey, a wind driven dust storm began that went on for the next four hours.  I mean to tell you, you could NOT see the sky, the mountain range or anything else other then the car in front of you.  I held on for dear life to the steering wheel and just kept driving.  At times the car was rocking from side to side like a sailboat.  I've never ever experienced anything like it, thankfully.
Pretty scary and stressful.

I actually considered spending the night in Matehuala which is about 4 hours from San Miguel. Then I decided to press on and did so.  Shortly after passing Matehuala the wind died and the rest of the trip was sunny and clear.  Whew, I don't ever need to have that experience again.

Other then the two checkpoints I mentioned, there were no other stops.  The roads for the most part are in great shape since the rainy season has long been over and any repairs have been completed.

I always love the drive - NOT this time!

I'm sure happy to be back home - even though I had a great time in Texas.

I am a regular reader of your blog but this is the first time I am leaving a comment. I read with interest that you drove through Nuevo Leon because I am to go to Monterrey this weekend with a group of Danzón dancers. I was feeling nervous because the US State Dept site says do not travel in Nuevo Leon, although travel to Monterrey is allowed. You didn't feel insecure about going through NL? I should stop fretting? i would apprecite your view of this.
Joan

Joan, I don't have much faith in the State Dept. With that said, as long as you travel during the daytime you shouldn't have any problems at all.
When I cross and have gotten the green light to go, I lock my doors, make an immediate left turn, go to the end of that road and turn right. That is the bypass around Nuevo Laredo. If while on that road in town someone tries to stop you - just keep going. Sometimes poor people try to stop people for handouts. Don't. Follow the bypass to a large intersection with the freeway above - make a left turn and head south to Monterrey. When you can, get on the cuota. It's much much smoother and easier.
Have fun - don't fret.

I drove to Gaudalajara a few times. That was twenty years ago. I thought it was very stressful. I am glad that times have changed so that a woman driving alone feels secure to drive in Mexico for great distances. I wish it were so in Honduras.

I may have my facts mixed up. (It wouldn't be the first time.) You now have a permanent resident visa, correct? And you were able to bring a US-licensed car into Mexico. It appears we have all been listening to a lot of empty hollerin' from our fellow expatriates.

Babs I urge you to simply moderate the comments if you feel the need but do without the cussed garble identification thing. I suggest to you that the two are overkill. I cannot tell you how many comments I have given up on here because of that proving I am NOT a robot.

Useful info in any case - thanks.

Calypso, I would remove that "robot" thing if I knew how to.....I didn't put it on but I think its part of blogspot.
Anyone know the answer?

No Steve, I have an FM-2 which used to be permanent but is not part of the temporary resident category.

On the poster at Aduana, I did not see any information or indication that a permanent resident could not have a permit, but, the permit is called a Temporary Import Permit, so who knows..........

PS Steve - I don't intend to go to permanent resident status so its a moot point for me.

Laurie, as the roads have gotten better its a lot less stressful. I've been driving in Mexico for over 30 years and have never been fearful.
I've even had car troubles and found people are so kind, considerate and helpful.

Glad you made it home in one piece Barbara. You can relax for a while now!

Thanks Shannon. AND I intend to see ya'll soon!

Hi Babs. I wanted to let you know I went to Monterrey this weekend and just returned. There is nothing to worry about in the southern part of Nuevo Leon. I am so glad I listened to you!
Joan

Thanks Joan for letting me know you made the trip without any incidents.

One time as I was driving to Texas there had been all this info about this happening and that and how dangerous, etc etc etc. As I passed through that area, I thought, were any of those people actually here?
It's such a disservice to the Mexican people and the tourism that is depended on for a living!

Zahidul Hasan said...
This comment has been removed by a blog administrator.
2:54 AM