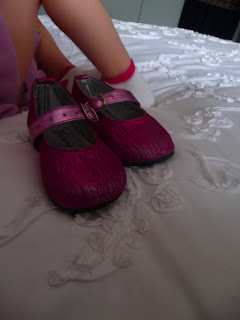 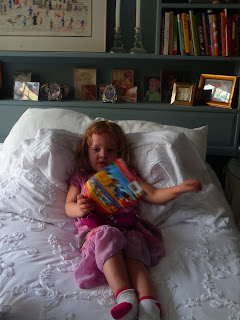 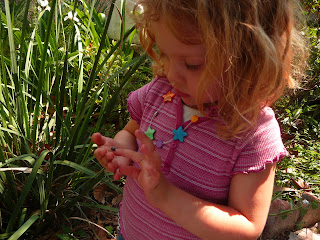 Last month in the post, Fuscia Princess Shoes, I showed you a photo of how Matilda's birthday shoes had deteriorated from daily wearing with the front of the shoes being no longer fuscia. Today she has a NEW pair thanks to the fact that the tianguis are still operating in Melaque and the woman who had the booth where I got the first pair was there and had the shoes! Wow, was I happy! Ecstatic would be more the word. Ok, only a Grammy can understand that.

Matilda is thrilled with her new "shiny shoes" and came over yesterday in an outfit sans the tutu but, of course, with the shoes on. She only took them off when she climbed up on my bed to watch a DVD called "Rio" that I found at the tianguis in San Miguel for 5 pesos. The movie is playing at the theater here now.

As she got firmly ensconced in all the pillows, sweet memories came back to me of my granddaughter Jessica, who will be 20 this year, doing the same thing. The other grand kids did also, but Jessica spent the most time with me, as she was the only grand kid for about six years.

So I'm now building sweet memories with Sebastian and Matilda as I did with Jessica, Andrew, Hannah, Emma and Christopher - all teenagers or almost. It's wonderful to have little munchkins around again. An absolute delight and surprise.

You know what else? Kids in many ways are the same. Matilda got as much enjoyment out of playing with a doodlebug in the garden yesterday as the other grandchildren did many years ago. It adds to the fun.

Each kid however is very individual. Matilda never ceases to amaze me with her comprehension, her language ability and her memory. Even as a tiny baby I referred to her as the "Mensa baby". Yesterday she wanted to go up on the roof. I said "Why"? She said, "To see Mr. Paul" - that was the last place she saw him and they played before he returned to the USA in February. It caught my heart.

Life is always full of surprises, isn't it?
Posted by Babs at 9:11 AM

Rio is a cute movie. Your memories are like jewels. Thank you for sharing.

I'm glad you enjoy reading my ramblings..........I guess as I get older I do "gather" those memories around me.

I FAILED TO SAY THE MOVIE, RIO, WAS IN SPANISH. MATILDA IN FOUR MONTHS IS TOTALLY BILINGUAL! GEEZ, WISH I COULD SAY THAT.........