The Catch of the Day 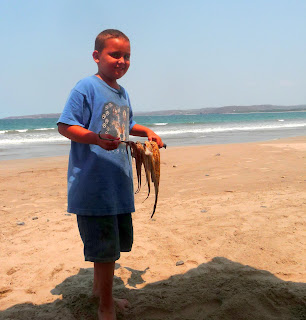 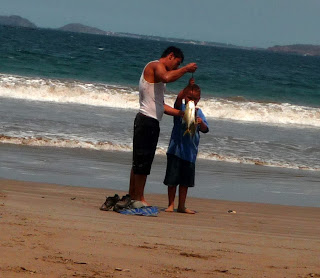 While in La Manzanilla for the day a few weeks ago, we had a fun experience. My friend John was surf fishing and caught a good size fish, but only one. Not enough to feed three people, which we were. So he buried it in the sand up near our chaises and we waited for a young boy to come by. He wanted to be able to give him the fish.

About an hour later this young boy and his dad, who we had seen a couple of hours earlier, came by with a string of squid they had caught. John called the boy over and uncovered the fish. The look of wonderment on the boy's face at the fish said it all. The fish was given to him.

He and his Dad headed down by the water to wash the sand off the fish and load him on the small pipe with the squid.
It was delightful to watch all the action, the smiles and the many thanks that were received for what I can only assume was their "comida" for the day.

Babs, that fish looks like it would certainly have made a few nice grilled fish taco's! Great story.. hope you enjoy the sounds wafting up from below the dam over the weekend! A glass of wine, blues/jazz on the aire, and an evening breeze on your deck seems just about perfect right now...
Saludos!
Dan in NC