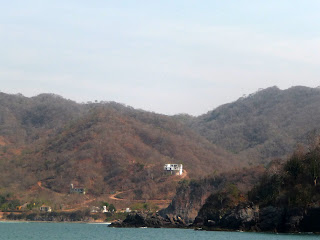 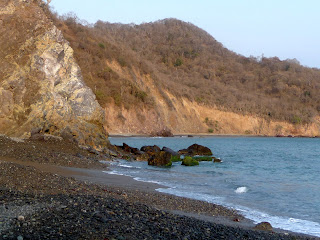 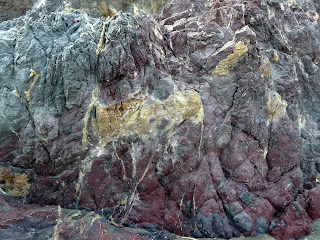 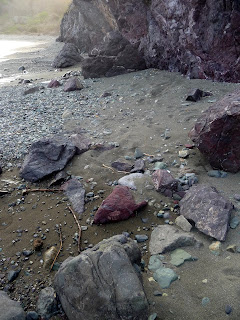 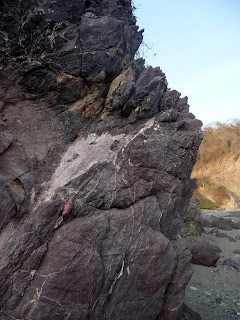 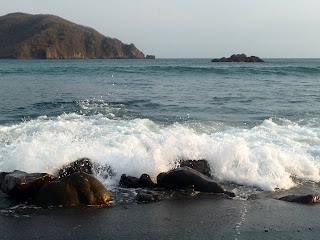 I was like a kid in a candy shop. Trudging through the black small pebbly beach getting a foot "massage" as I trudged.
I wanted to see all the different colors of rocks fused together eons ago. Some looked like gold, others jade and the deep magenta colors were spectacular. If only a geologist had been along! In the small rocks on the beach I found a black rock with fused crystals in it.

Was I in volcanic territory? I don't know. But I do know it was breathtakingly beautiful to me. Then to turn and look at the ocean was such a juxtaposition. Quite magnificent.

This beach called Calechosa is a well known secret to the Mexicans in the area around Melaque. It is also well known to surfers as there is a good surf break there. The kids would show up when the surf was up. How they knew that I don't know. The road to get to my friend's house and this beach is NOT a road, but a dirt rutted path of ups and downs. Rainy season would NOT be a time to attempt it.

I'm told that days or a week can go by during the rainy season without being able to navigate in or out from the main road. But heck, when you live in a paradise like this, who cares? My friend just stocks up on gas for the tank on the roof and the rest is solar. What a life!

If you're ever in San Miguel and come by, I'll show you all the rocks that I lugged home from the beach! Muy bonito.

I will be stopping by -- soon.

This is why I keep yammering on and on about Northern California beaches. This is what they look like. Almost all of them and you can drive right up to them or at least close enough to walk. I prefer the later as I do not want to look at parking lots when I am in Nature. It is so very wild and beautiful and there is so much to explore looking up, sideways, out and down. I had a huge collection of colored glass, my favorite being blue and shells and amazing rock forms. It was heaven and it is all I miss about USA living, so I am glad to know there is something similar not too far away.