IF you have nothing to say - DON'T 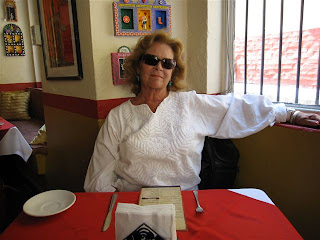 I guess you've noticed I've been pretty quiet lately. Unusual for me. Well, I just haven't had anything to say!

That reminds me of 1985 when my son had just returned from Europe for the first time. He had backpacked all over.
He Ended up in Greece where he worked as a disc jockey to get enough money to get back to London to fly home. I wanted to know his impressions - the one that came to his mind first.

I thought it would be some grand cathedral or city or.........girl he met. But no, he said, "You know Mom, the people I met and observed didn't talk unless they had something to say." Wow, what did he mean? He continued, "You know all those people here, meaning the USA, who talk just to fill the void and to be heard".

I've never ever forgotten those words of wisdom.

So, I'll work back into it, but for the time being, I'll just be quiet a little longer.

May I learn your lesson!

Shussssh.....Listen.... That's the sound of expectancy....
Let the quiet flow for a while, and you'll come to where you need to be..
Dan in NC

If that is your photo

You are so beautiful

Well dang Ms Babs,
You look like you've got a little attitude going on in that picture. If you don't want to talk we won't make you. LOL
Jan in Mississippi

It's not so much that "people" talk. Women talk, often nonstop. Men talk far less, except for Steve Cotton, according to him. I did not find him overly talkative despite how he bills himself. I talk hardly at all.

You're a moderate talker, which is fine.

And that is a very good photo of you indeed. Looking mighty good.

Steve, I find out that when I don't talk, I learn more from the person I'm with!
Dan, my kids always worried when I was quiet. They were concerned that either I was sick or mad...usually I was neither.
Roni, how kind of you, gracias.
Ms Jan - Well, you think? Sunglasses hide a multitude of sins.....ha
Felipe, yes, you don't talk much but what you say, is worth hearing. And thanks for the compliment.

I totally agree...and have found that as I get older, the less I want to waste my time listening to people who feel like they have to say a lot of words to communicate nothing. Your son was fortunate to learn that at a young age. That's one of the reasons I enjoy traveling alone. Have enjoyed your blog in my desire to live in Mexico one day soon. You can visit my blog on that venture at www.isladeb.com