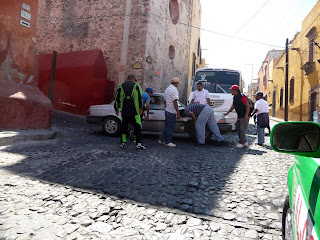 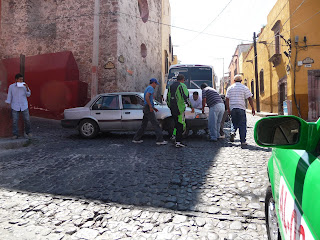 These things that happen could never be made up! Well, they could, but it is funnier when it REALLY happens.....unexpectedly.

Today after walking around centro shopping, getting money and having the weekly Monday morning coffee klatch, it was time to head up the hill. I flagged down a taxi. I relayed to him that Nunez St. was cerrado, closed, and he would have to go up Santo Domingo to my house. Why Nunez was closed was because hugh jackhammers were tearing it up on my hike down this morning..........one can only guess at why since they just finished redoing the road two months ago. One doesn't try to figure it out - one just accepts it.

So, in the taxi we go around the corner onto Salida de Queretaro and see a car in the middle of the intersection of the Salida and, you guessed it, Santo Domingo. No way we were going to get to turn left and head up hill.

The taxi driver and I sat for a minute and then all the guys started piling out of their vehicles from all directions. It appeared to me that they thought they could push the car out of the way and help the owner. But, notice what happened when they all pushed the car. The wheel on the passenger's side of the car came OUTSIDE the fender. It wasn't going to get pushed anywhere.

I was taking photos while the cab driver was trying to help. Then when there was nothing for anyone to do to help, unless all the men had physically picked the car up and carried it away, we drove off to see traffic already backed up at least seven blocks.

Much to my delight, however, the taxi driver drove through a rural area on the outskirts of town to my house where we could see fields and fields of wildflowers. In addition, the cacti are blooming with large, fat, fuscia colored tuna covering the plants. To those of you in the USA, tuna is not tuna fish, but the fruit of the cactus that is eaten in many dishes. IT is supposed to be filled with all kinds of good nutrients.

My usualy five minute trip up the hill was almost thirty minutes. But one learns to enjoy the moment and go along for the ride.

Just consequences of suspension issues with topes and pot holes, in the charm of Mexico.
The bus could have easily push him out of the way.....

The unexpected is what makes living in Mexico so enjoyable. You never know what's going to happen. :)

Life in Mexico is an adventure

Yes, Tancho they could have but it is such a narrow street, it would still be in the way. I do wonder how the issue was resolved.
Leslie, don't you just love the unexpected?
You are SO right Calypso.