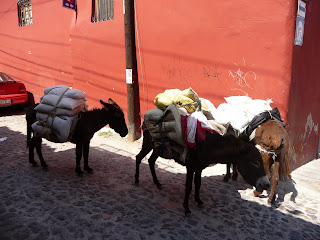 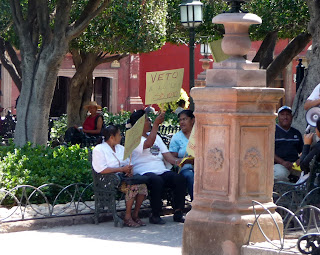 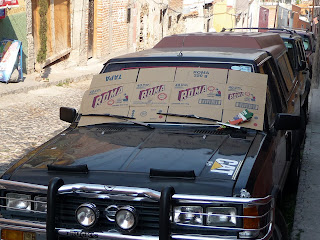 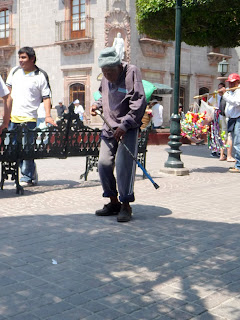 As I start my trek down the hill to centro, there is always an array of scenes to witness. From the sublime to the ridiculous sometimes. Or from the heartrending to the hilarious.

On Friday it was fun and poignant. The donkeys with their sacks of dirt that come in from distant villages and walk the streets all day until all the dirt is sold. Then the long journey, about 8 hours or more, to return to the village in the distant hills. Or the guy who let "necessity be the mother of invention" and covered his car windows with a box instead of one of those fancy car window covers that people use in the USA. They are so clever.

Upon arriving in the jardin, there were all kinds of activities going on. A protest over the new Arizona Law. About thirty people with posters with various things written on them. In addition some carried defaced American flags. The first time in ten years, actually in forty years, that I've seen a demonstration against the USA in Mexico.

In addition, the old man whose name I don't know because he doesn't speak but chants, walked by. He is a daily fixture. When I came many years ago, he was spry and chipper and full of piss and vinegar. He used to chant about all the signs in the jardin for various charity events. He would take his cane and knock them down and keep on walking. Well in the last year, he has slowed down and takes baby steps around and around the jardin with his head down. BUT he is looking up through his eyes at us and whats going on........I dread the day that he no longer is walking around and around the jardin. I call him "Mr. Persistance". I can only hope that I will have that kind of constitution of human spirit when I'm as old as he.

Every day in Mexico I learn lessons. This day it was persistance, ingenuity, dignity, and humor.

Love your accepting, optimistic attitude; it really makes me feel good! Keep it up, girl.

And just think what Richard could have done with that material.

Thanks ccinha - I intend to - it's the only way I know how to live.