The Feast of St. Michael the Archangel 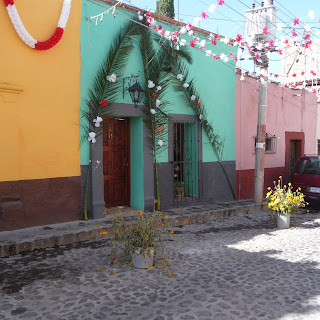 "He" is the patron saint of San Miguel de Allende. And, as many of us are want to do on our birthdays, although this isn't a birthday but a saint's day, it goes on and on and on. The events start nine days before the saints day which is September 27th I believe. And then the festivities go on for about another ten days. Often by the time it is over, gaiety is forced........at least in my opinion.

But I left the house early yesterday morning in anticipation of what I would see when I got down the hill to centro. One never knows. I walked many streets doing my errands. This to pick up at this store and that there. But, I was hurrying. I didn't want to miss anything if there was anything going on. On my way down, the mayordomo's house in Col Tecolote was so designated with the palms, tissue paper flowers and crisscrossing the street are plastic flowers. This happens in every colonia. One can tell if there was a desfile (parade) the previous night by the unsweeped confetti still on the streets. There was a little on my path to town. 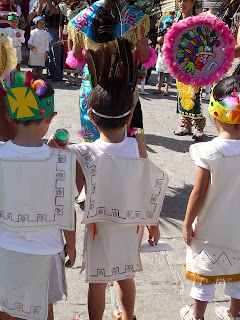 Oh my gosh, when I finally did arrive in the jardine it looked like Ringling Bros. three ring circus! There were two small parades arriving in front of the parroquia. There was a group off to one side watching a clown. There were Aztec dancers on the other side. Surrounding them with rapt attention were these little ones all dressed up in their little people outfits. Outfits handmade by mothers or others. Very cute. I didn't know which way to go to capture any or all of it. So, I just stood still for a while and watched too. 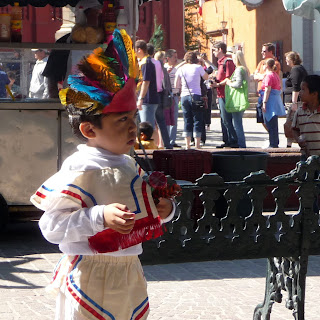 One of the best times, for me, is when all the festivities are over and one by one as people are leaving, you can REALLY see them. This little guy stopped right in front of me. I couldn't resist this photo. I love that by watching these kids are absorbing the traditions of their culture and their families. 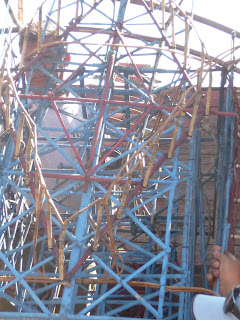 Oops, then I was off again when I noticed a truck pulling up in front of the Parroquia loaded with parts for the assembling of castillos. These are the big firework towers that go off like the space shuttle to the moon or something at night. I wanted to see if they still made them out of bamboo or small wood pieces. Not bamboo, but still discarded wood pieces. They are very intricate. Think erector set.
All these castillos, and there were a lot of them were being set up for the Alborada. Once when I was in the Sierra Gorda region, I watched for hours while a man delicately cut bamboo slivers and started a castillo. A true artistic achievement that is blown up at the end of the day!

The Alborada could best be described, at least by me, as the "war of fireworks". It starts at 4AM, goes on til 5 or longer and up here on the hill it is deafening. People cover themselves with cardboard and anything else to prevent their bodies or clothes from catching on fire. They observe this right in the line of fire, no pun intended. I do not exaggerate. I can't imagine what it would be like to be right there.......it definitely wakes up everyone and every animal for miles around. There is a lot of significance and tradition to it. I'll leave it to you to do your own research. If I wrote it all, this blog would go on forever.

I learned a new Spanish word from you today "desfile" (parade) Cool!
Have to find an excuse to use it.

Haven't read about your command of the Spanish language on this blog yet?
How would you rate yourself: fluent, mixta, or why bother, I'm surrounded by gringos?

San Miguel must have a different birthday over there. The loons on our plaza did their noisy mayhem for Miguel a few days back.

Just this morning, however, there was a MARCHING BAND blaring down our street at 6:15 a.m., in the dark. My wife and I were in bed, as any normal, unemployed person would be.

One never ceases to be amazed at the dysfunctional mental processes that say: Hmm, let´s have a party, and let´s start in the dark before dawn.

Ah Dana, I learned desfile so I wouldn't miss any of them.

My Spanish is great, as long as I'm the one talking...ha....it's when they answer me in rapid fire Spanish that I freak out and "mas despacio" is another phrase I use frequently. I get it, what they're saying, and I answer but not always gramatically. It is embarassing to me that I'm not fluent. Lord knows I've worked at it for 20 years. So, I guess I'm "mixta".
Felipe, I love the early morning parades. It says to me that they are dedicated enough to get up and go do those things we don't understand.......besides, they work all the time. when the heck else could they have a parade other then early or late or on Sundays? As you know, 6AM is a sacred time for them......you know, you're just pulling my leg.

Babs, where you live there are no parades passing at dawn. I know where you live. You´ve got a nice, isolated corner, you lucky doggy.

Early or late on Sundays?? Would that it were only Sundays. It can erupt before dawn on any given day. A late party, I understand. I do not attend, but I understand. But there is no excuse whatsoever in a society that cares about other people (which this one totally does not) for setting off huge explosions in pre-dawn darkness.

We´ve always raised the roof before dawn, so why give it a second thought? Light a fuse.

One can try to justify it till the donkeys head home, but it´s pure inconsideration no matter what kind of pretty, festive face one tries to put on it. And many try to do just that. Doesn´t convince me.

Felipe, I see you're in your "curmudgeon" phase today. Well, I do HAVE parades. Go back on the blog to 6/8/08 to read about the fireworks and the tuba band. Then again a year before on July 14, 2007 for The Virgen and the Tuba Band. I reread them and laughed all over again. You have to see the humor in all this instead of being so darn grumpy. Geez

Your pics remind me a bit of our Lempira Day here in Honduras, in honor of the last native to stand up to the Spanish. Lempira is also the name of our currency. This year Lempira Day was very subdued due to our troubles. Also, they cancelled the Day of the Bible, which is a huge parade in almost every city and town in Honduras. Sigh.