Life Rolls on Even When There are Shocks and Surprises! 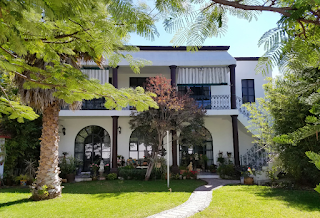 The first news is that I was told in March that the owner of the property that I live in  has now decided to sell the house I have lived in for four years.  It was a shock and bombshell, to put it mildly!  Luckily I have a lease so I don't have to move until November 5th, thankfully. I thought I would live here for the duration.........no such luck!

It has been an eyeopening experience looking for another place to live.   First of all, it must be a one story place with no stairs.  Second, unfurnished and third some outdoor space for all the plants and shrubs that I brought from the other house.  BUT, worst of all is that rents have exploded here in SMA as well and since I live on Social Security I have a limited, to  put it mildly, budget.  My max budget for housing is $700USD all inclusive of utilities, or 14,000 pesos.  (I only live on the first floor of this house)

Finding a one story with no stairs and the budget are the problem.  In two months I have only seen four places.  None of which were suitable due to timing or budget.  Landlord would not let me out of lease early when I found a place in May so I missed out on a perfect place living right down the street from friends.......c'est la vie.

Yikes, I'm at the "almost panic" stage now with only two months left to find something SOON.  Why soon?  Well, when the snowbirds start arriving the first of October the town will be full to overflowing and so........now is the time!

IF you are in San Miguel and know of anyone in a place as I have described who is moving in the next month or so, please tell them about me or send me information to contact them.  That is how I found this house was knowing the people and making arrangements as soon as I heard they were  returning to the USA.

On to other news since I haven't really posted a blogpost in quite a while.  Life goes on! 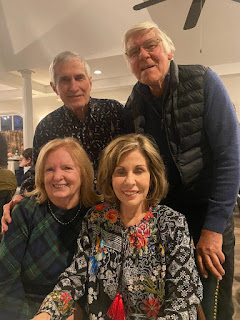 The Bolton High School Reunion was in April.  No, I didn't get to go but these are several friends who were in Alexandria having fun and seeing the "old gang".  It was our delayed 60th reunion.  Yes, these lovely people are in their 80's.  Pretty darn good looking at this point!  I was there in spirit!

Other changes that are going on in the area around San Miguel is the opening of around seventeen wineries!  Many have restaurants and accommodations to stay on the property.  It's an amazing thing to see as I haven't been out of town in quite a while.

But friends made reservations for lunch a month or so ago and off we went for an absolutely delicious lunch and to tour the grounds.  There are also amazing accommodations for weddings and large parties
It was incredibly fun to get out and to experience time with good friends.

On another note, a jazz note, John and I attended an outdoor concert at a private home of our friend, Doug Robinson with a trio.  Absolutely delightful to be out in the cool evening air with a beautiful sky full of stars overhead. 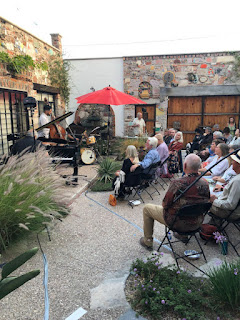 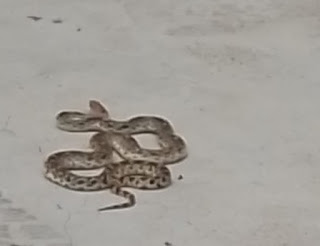 And, I don't even have to leave home to have an "experience"!  This snake was curled up initially in the flower bed and then crawled or slithered or whatever out to the parking pad!  I opened the big gate about three hours after we initially saw it and it slithered out and went "who knows where".  It was truly astonishing to see such a large snake here.  Josefina, the housekeeper, was totally freaked out.  It was about five feet long.  My son said it was a rat snake. Very cool!

The grand kids and John are fine.  They had a great summer. I wanted to share photos of their trip to Tamasopa where they repelled and ziplined and jumped in waterfalls but for some reason those photos won't post, darn.  If I ever figure out how to, I will share at a later date. They went with a whole group of friends and their parents for a few days.  Great fun for all.

School starts back on Monday!  Here are a couple of recent photos.  Matilda with her horse and Seb, just being Seb.  Love them both so much.  They are definitely growing up! 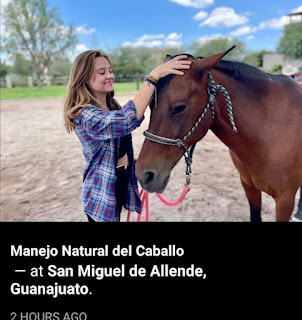 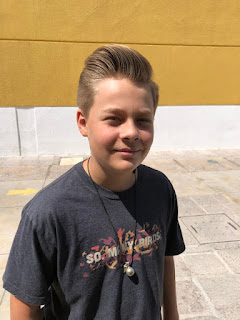 It's hard to believe Fall is just around the corner!  Where or where has this year gone?  Do you feel the same way about this year? Two grandchildren in the USA have birthdays this coming weekend.  Jessica turns 31 and Christopher turns 24!  No longer grandchildren but just "grands"!  Haven't seen either one in four years!  Oh my........

Take care and DO stay in touch!

Welcome back Barbara! We are looking for a magical place for you. Somehow, someway things will work out. Saludos, Robert & Colleen

Re Seb and Matilda...WHAT?!?! Unbelievable. How can this be?

Re your next home - Are you talking to St. Joseph? (No, I'm not Catholic, but do KNOW engaging him helps!) Feel it. How do you want it to feel? Not so much picture - rather feel it. Conjure it through feelings. Imagine yourself there, waking up, going to bed, going about your day. How does it feel?

Manifest it through feeling. And BELIEVE that it will all happen in a timely fashion. All timing is Divine. You WILL be taken care of. Try not to hang out with your feelings of lack, of fear of not having a home "in time". Don't attract that to you by thinking of it, thus giving it power. You've ALWAYS landed on your feet and you will again.

Your homes here have had a magic that carried them and your next one will as well. San Miguel has your back. It always has.

Perhaps the new owners will rent you the apartment. Why not wait and see?

Hope you are able to find a place soon that meets your needs. I know that real estate prices are soaring here in Mexico City too, mainly because so many "gringos"... not retirees, but young people working remotely... are moving here. I'm keeping my fingers crossed that the owners of the apartment I rent offer it to me for a price I can afford.

It's amazing how time flies and the youngsters grow up. Alejandro's nephew turns 12 next month, and today he started "secundaria".

Best wishes to you,
Bill

Wishing you the best in finding a new home!
What is the winery you went to?

Barbara Lane - I already asked a Catholic friend to bury St. Joseph which is the method for selling a house, but maybe it will work for this too.
Thanks for your advice. I remind myself each morning that I only that this day and not worry about the future.....sometimes it works. (If I don't find a place, do you have a spare bedroom? Just kidding!!!)
Sondra - I asked the owner if I could stay here and pay rent when my lease is up and until it sells and she said "No!" Sadly.
Bill, it seems that rents are going up everywhere in the USA and Mexico! Same with house sales here in SMA! And, yes, kids growing up is so astonishing.......time seems to fly by Thanks for your best wishes. I think I need them.
Sylvia, I will have to find out the name of the winery. Since I didn't make the reservations or drive, I had no need to know. It is on the road to Guanajuato!

It's nice to see your update. My! Your grandkids have really grown.

I hope you find a suitable place in SMA. It's hard to find a Mexican house without a lot of stairs. I can only imagine that SMA has gotten very expensive. Ajijic also seems to have more and more people. Though there's also more room to build there, so I think the prices are relatively stable.

Cheers and best of luck,

Kim G
Roma Sur, CDMX
Where there's tons of places to rent or buy, but prices haven't moved much.