Returning to San Miguel de Allende with JOY and HAPPINESS!

The last I wrote about the family, John, Matilda and Sebastian was on April 2nd after they had arrived  in Colorado to try out a new way of life in the USA! 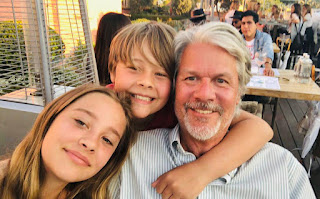 Surprising to everyone was the cost of things!  Also surprising was the good medical care and the    ease of shopping for foods that John had not seen for a long, long time.  The best part was spending        time with his sister, brother-in-law, nieces and nephew.  Also hiking in the wilderness and camping   was a highlight. Colorado is a beautiful state,  In fact, my ancestors were involved in the settling of     Durango and other areas including having the first Navaho Trading Post.  It seemed like destiny for   my family to have relocated there. 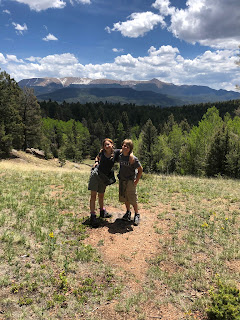 But, surprisingly, after much time pondering and trying to adjust to the difference of the slow pace     of Mexico, missing friends and business colleagues,  the decision was made to return to San Miguel.

They arrived back on the evening of July 4th!  I wish I would have had my camera ready as they    pulled in in their SUV with a trailer on the back and a pod on the roof.  The funniest part was all the doors flying open and the next thing I knew as I stood in the yard was I was hugged my grand kids.      so strongly that I nearly fell over.  What a joy!

The next thing that happened, of course was a hug from my son who had been driving for a week with two kids and five cats..........Corazon, Princess, Tussy, Indio and last but not least, one of the kittens who made the trip North as a three day old kitten, Oliver.  The kids let the cats out of their crates in the back of the car and the cats were ecstatic to have trees, grass and fresh air to run around.  It was truly    a sight to behold. Cats running, kids hugging and then all of us enjoying each other's company.

It is good to have all of them back, even the cats, ha!  Since arriving they have found a house nearby,have registered and started school on Monday and gotten back into the rhythm of life with family and many friends.  Mati has been busy riding her horse every chance she has had.

(I have spent the last hour trying to download photos to this post. Google has changed some things and now it will not allow me to post from google photos to the blog.  I have tried every way possible to be able to post a group of photos and only one, somehow, got through.  Who knows how or why?) It is the kids on their first day of school on Monday! 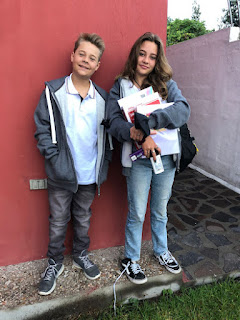 John has returned to his real estate career with Forbes, which was previously Christie's.  Seeing business associates and clients has been  enjoyable  for him. If you have any real estate needs,         Please  give John a call at 415 124-4755 or email him at jte1963@gmail.com 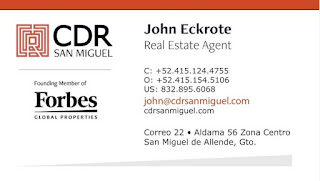 So glad to hear that you once again have your son and grandchildren with you in San Miguel. I am sure that you are ecstatic!

How wonderful for you! This makes me smile, and it's always good to start the day with a smile. :)

Hi Bill! we are ALL delighted, to put it mildly....
Hope to see you and Alejandro on one of your trips to Mexico.
Take care


Ginger, thanks so much. I'm imagining you with a smile!
A good thing.

I am so glad to hear this. I had wondered why they had left this bit of paradise. I can only imagine how they missed you!

Babs,
They're beautiful. They should of went to Hollywood !

Glad for you, Babs and for the "kids". I think you are all in the right place now!

Oh I'm so happy for you! And them of course - and how did this happen? That Mati is a gorgeous (and I do mean gorgeous!) young woman? No longer a little girl.... wow. Well of course it helps that her grammy and her dad are "lookers" too! ;) What a joyous return!

Thanks Gilda, Jim, crynoutloud and Barbara.

It truly has been a happy time. The best part is to see the kids with busy social plans with new friends and old.

I have a funny story to share in a blog coming up of a conversation with the kids. It is sure to make those who read it chuckle. It happened to me on Saturday and I still laugh when I think about it.......

As much as you like SAn Miguel, I know it was not the same without Your Tribe nearby. It sounds like a good decision for everyone.

Indeed Steve! They are busy with school, friends and for John with work, but at least I see them at least once a week or talk with them.

I hope you get over here some time. We all want to see you - me, Al & Stew, Barbara, Billie etc etc etc.

Barbara, this makes me so happy. I know you must have missed them so much, especially thinking they were not returning. Sending hugs,Dana Hill from Oakland CA

Thanks Dana - I had reconciled myself because it seemed at the time to be the best plan with covid and all, but as it turns out, being in SMA is the BEST!

Yes, I'm thrilled that they have returned.

Good to hear from you.........have fond memories of Oakland and SF and all the environs!

I'm so happy for you, it would make you feliz and we, your followers too because you will write more funny,, interesting stories for us.

Gracias Anonymous I enjoy writing and hearing from the readers. Yourself included.

Hi Babs, I read that you were having trouble using Google Photos to add images to your post. I don't know what device type you use, but on a PC/web browser I am able to click on Insert Image on the toolbar, select Photos and then click the first photo & Shift-Click each other I want, then click Select and it pulls all of them in.

Thanks Scott. It was "human error" on my part! ha!!! I was clicking on the wrong setting within the box to insert the image and then once I realized it was ME instead of Google, I was able to add the photos!

To say I am technically challenged would be an understatement, ha.

Thanks for taking time to write! Hope all is well in your "neck of the woods".

Vanessa Gordon said...
This comment has been removed by a blog administrator.
5:12 AM

Hi Babs, I used to read your blog regularly. But, then you weren't writing often and I - I dunno! But, when I opened this today, I was so surprised to see your family had moved to Colorado - and so very happy for you and all to then read they returned to SMA. If I was able to, I'd move to SMA!!! I hope they're going to continue to feel they made the right move to return. I scrolled way back and saw the photos of the beautiful pieces of furniture they sold 'tho. Qué lastima! I hope they found a nice house and will be able to replace the furnishings. I'm sure being back with you is worth it. The kids have grown so much. And as has been said, Mati is gorgeous. We've never met and now I think we won't. I haven't been to SMA since 2017, but I still have so much love for it. It's just changing so much (thank you for the updates you wrote), I wouldn't fit in like I used to. I'm going to keep up with you from now on. abrazos, Lena James. (Marilyn in gmail)

I'm sorry I didn't respond in a more timely fashion.

If you do ever return to SMA, please let me know you are coming!

Take care and thanks for all your comments.