Something happened way back around the holidays.  I am finally getting around to writing about it.

Frontier Airlines went above and beyond to find something very special for my granddaughter, Hannah who lives in Colorado. 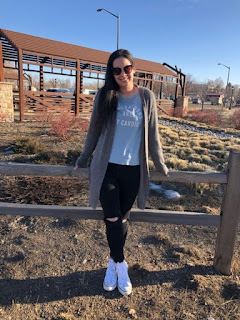 Here is the backstory.  Hannah had her 22nd birthday in November.  Her parents, my daughter Julie and son--in-law Rich gave her a ticket to fly to Houston during the holidays to spend time with family and friends.  Hannah was so excited as she had only flown alone one time previously.

Her time in the Houston area was wonderful.  Along with all the fun times, her BFF, Haley, gave her an FFA jacket.  FFA had been a very important part of Hannah's life while in high school.  She had raised two pigs that were prize winners and which she was able to sell after all the showings and competitions.  The jacket meant a lot to Hannah.

Fast forward to heading back to Colorado.  Landing in Denver.  With all the hullabaloo of getting off the plane, Hannah did not remember that she had the jacket and some other things that did not fit in her suitcase or backpack in a Target bag which she had stowed in the overhead compartment.  In all the rush, she did not even think about it until she reached home. Colorado Springs.

A suitcase is one thing.  Even a backpack usually is tagged with a name and other information.  But, this Target bag had nothing but stuff in it.  It was the first week of January or thereabouts.  You can imagine how busy the airlines were with handling all the passengers and luggage.

The airline was contacted immediately.  All the information of flight number etc. was provided along with the items in the bag along with the precious jacket.  The people at Frontier were very patient and
thoughtful.  Follow up calls were made for several weeks.

The delay led us all to wondering if ever that Target bag could posssibly be found!  Voila, it was!

About the first week of February, Hannah was notified that the bag had been found and that it was on its way to her at her home.

Hannah called me the day the bag arrived!  I was astounded that it had actually been found.  This saga was repeated by me to friends who had retired from various airlines.  They all just shook their heads in wonderment.

But, Hannah had faith that they would find her new navy blue FFA jacket.  And they did!

Congratulations and many thanks to all the people at Frontier Airlines who looked and found and followed up to get this precious package back to Hannah.  Airline Customer Service is alive and well!

Nice to hear a positive story about an airline, and I'm glad for your granddaughter.

Thanks Bill. It is a small miracle IMHO!