It was not a "fun filled" week last week, but it certainly was one full of activity as I read and acted on your advice, suggestions and personal experiences.

Truly, you gave me the key to resolving the balance issue!  I immediately made an appointment with an ENT doctor.

I also made an appointment with the orthopedic surgeon and he had some startling information that helped to explain my frequent falling! 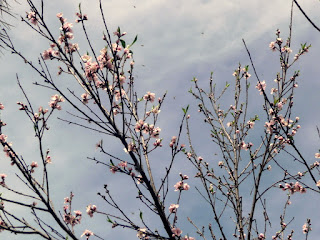 The peach tree is literally covered with blossoms.  The hummingbirds are in ecstasy.

The scoop is this:  The orthopedic doctor showed me on my x-rays that my two knee bones are not
aligned from the major fall right after my arm episode.  Hence when I take a step, the two bones minus cartilage are not connecting as they should.  Yikes.

Of course he says I need surgery which opens a whole other saga that I do not want to talk or think
about right now.  Mainly, spending six months in the USA to have the surgery and recuperate.

So, at least I know one REASON.

Then  the dizzyness continued all week.  I could not wait to get to the ENT doctor about the vertigo.
Again, I'm not going into the details, but suffice to say, when the doctor finally got to the part of doing the movement necessary to put the "crystals" back in position in my ear or ears, I was no longer dizzy!  Who would have known if ya'll had not told me about this?  Not me.  Now it did not
happen instantly, but by the time I awakened the next morning and turned over to see if the room was
spinning, it no longer was spinning.  Ojala.  Thank goodness.

So, at least I know the second REASON!

The suggestions for a exercises I can do from the computer, the easy yoga dvd I can order from PBS and the idea of getting a physical therapist who will come to the house, are all in motion!
I received not only the comments on the blog, but many personal emails with pep talks, more suggestions and thoughts.

There is no way to express my gratitude to each and everyone of you.  You got me over the hump of despair...........

Here is a little humor to end this post.  It was the headline of our local paper, Atencion, which is published once a week.

The headline and then the correction on the first page just made me chuckle.  Hope it does the same for you. 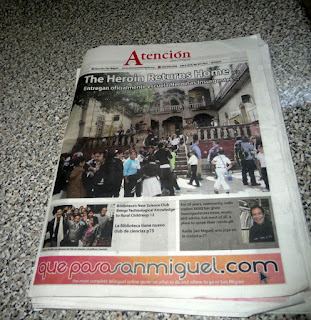 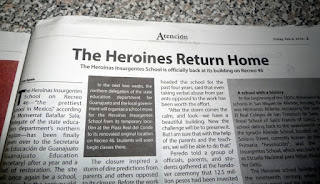 Glad to hear that you are getting some answers at last!

You're on your way to resolution! YAY!!! So happy to hear it!

Yea! I'm so glad to see this post. Keep working on it.
You are one determined woman and I know you can get this under control.
Love you, my friend.
Billie

Thanks Bill, Barbara and Billie - I'm SO glad to have good news. Each one of you had an impact on my getting something done once I knew what to do!

So happy to see that you have acted so quickly in many directions. It takes courage to figure things out. Just getting rid of the dizziness is huge progress.

However the knee issue concerns me. Is it a surgery to repair the problem or a knee replacement. If the latter, surgery and recovery can be done in two months.

Yes, Contessa, knee replacement. When I went last year to have it done and told the Dr. I had set aside two months, he said that would not be enough! So, that dashed my hopes plus the fact that he said my legs were not strong enough for the surgery.....This too shall pass with a resolution, hopefully soon.

Not having the dizziness has given me life back!

So glad to hear that the dizziness is gone! The few times I've had even a bit, it's been so frightening & frustrating.
As for the knee surgery, I suggest you get another opinion from a different surgeon about recovery. My best friend was mobile & functional 6 weeks or so after her knee replacement, and she is terribly overweight. My own efexperien with knee surgery (no replacement yet) is that early PT and lots of it makes a world of difference. Good luck!

Sorry I am only an RN and not DR but I disagree. I suggest you get another opinion. I know many people who managed in that 2 month period. If you keep walking and exercising prior to surgery you will be fine. Don't give up on getting it done. Your life will be so very very different. Even Google gives this average....

"You should be able to stop using your crutches or walking frame and resume normal leisure activities six weeks after surgery. However, it may take up to three months for pain and swelling to settle down. It can take up to a year for any leg swelling to disappear."

"Typically, knee replacement patients are able to leave the hospital within 1 to 5 days (often 2 or 3), and they can take care of themselves and resume most activities 6 weeks after surgery. The majority of patients are 90% recovered after 3 months, though it can take 6 months or longer before they are 100% recovered."

I am not trying to be bossy but I have seen so many folks changed and happy to have a life again. I have had two hips replaced as you might recall and I am now pain free and able to do things I never could before. When the time is right I hope the you reconsider.

Yes, Contessa, I'm working up to it. I have a call in to a friend who had knee replacement in Houston and is fine. I want to find out his Dr. etc. I was speechless last year, as was my brother, after the meeting with the Dr in Houston. It threw us all off base. I should have sought out another Dr. immediately, but since this man was at a place where I had had two torn meniscus repaired and was very happy, I believed him Silly me.

We'll see what will happen when I talk to my friend. I just need a name of a highly respected knee doctor! I would have it done in Mexico, except I don't have that kind of money and in the USA, 99% is covered if not all. And, so it goes. I am REALLY sick and tired of using this cane and envious of people who can stride along as I used to do. I so loved walking and dancing, etc.

Deborah, Yes it is a major relief to have no dizziness and my balance is much stronger now! I have gotten more done in the last three days then I did in the last two weeks! Thankfully. I'm so grateful to everyone for making suggestions and recommendations AND telling their own stories. It sure got me moving, literally and figuratively.

So happy to hear that the dizziness issue is resolved!! As for the knees, I'm sorry to hear the news. I had good friend that needed a knee replacement last year, and she said that she found this article published in Consumer Reports helpful in assuring that she chose the best/safest hospital in which to have the procedure--here's the link to that article:
https://www.consumerreports.org/doctors-hospitals/your-risk-of-infection-after-knee-replacement-depends-on-your-hospital/

I think I feel a lot like you do about needing surgery---I really enjoying walking and dancing, too and I'm not sure if I could accept never being able to do those things easily again. But, the knee replacement procedure if done by a surgeon who is very experienced and in a hospital that does LOTS of them is successful for many, many people. I think the key is to do the research beforehand in order to make the best decision. I currently have one knee that doesn't work very well (I can walk, but not quickly or for long distances, but can't dance so I may be looking at the same kind of surgery myself before long.

Hi Mary AnnHT! Thanks for sending me this article to read.
After having lived in Houston for 34 years and having total faith in the international Medical Center there, that will be where I will go. Finding the Dr. is most important but I would have no hesitancy at Baylor, Methodist or ST. Luke's. Over the years, I've had one thing or the other at each of them and was more then satisfied with the level of care as they all three are teaching hospitals.

Besides, I have a brother, a wonderful sister-in-law and a grandson in Houston not to mention a bazillion friends......figuring it all out after having gone through this decision making LAST year is the issue!

I am not on pain meds now except for 2 ibuprofen from time to time unless I walk too much as I did today when I did a BIG grocery shopping walking extravaganza for 1 1/2 hours at the store. Yikes, but I'm okay now. No, I did not dance down the aisles....

This afternoon I treated myself for about 45 minutes of sitting on the chaise outside surrounded by flowers and aggressive hummingbirds while I read a newly arrived Southern Living magazine.

So glad you are on the healing and discovery road in San Miguel de Allende.
As you are fond of saying....... "Onward and Upward".
Healing thoughts to you.
Robert & Colleen

Robert, thanks for your note. I have been
wondering how you like your new place and new
areas to explore!

Let's get together again when ya'll have time!

I'm so glad to hear you are feeling better, really. I just went back and read your reply to my comment on the "help!" post. I still think that sooner or later you're going to need a knee replacement. So my suggestion is to figure out a way to do most of your recuperation in SMA. After all, if you wait until you're much older, then the recovery will become that much more difficult and prolonged, perhaps even impossible. And how much fun will it be living in SMA avoiding rough surfaces, cobblestones, etc. I'd encourage you to bite the bullet as much as possible.

That all said, I'm really overjoyed that your dizziness problem has been solved. Kudos to you and your readers.

Kim G
Ajijic, Jalisco
Where some recent knee pain has made me reevaluate the wisdom of doing so much running.

Thought of you when I saw this...its a hands-free walker

Kim, STOP running. AT least the ortho doctor says that causes more knee damage then anything. That and tennis! Thanks for your comment.

Unknown, thanks for thinking of me. I have written down the link to the FB page and will check it out shortly. Now that the dizziness is gone, I'm doing much better with balance and getting around.......