All of a sudden the pace of life in San Miguel is picking back up.  For the next three weeks, the
calendar is full of all kinds of interesting and fun things that I will be doing.

Friends are in town who I have not seen in quite a while along with new friends, who are blog
readers and are visiting SMA who I look forward to meeting.

A few weeks ago, at lunch on a Friday, it was with three people who are blog readers.  Two have
been reading it since I started in 2006!  It is a surreal feeling to be with people who know way more
about me then I know about them.  But, it is such great fun to meet and get to know them.  The couple who have been reading the blog since 2006 have moved to SMA with ONE suitcase and are
planning on being here permanently.  Right now they are looking for a house.  A delightful couple! The third person has been a friend here in SMA for many years but she had initially been a blog reader too.  As a part time resident, she spends time here and in Austin.

I tried last weekend to watch the Oscar nominated movies.  My "once a year" time to watch movies that I have gotten from Juan's.  Left to watch are Favorites and At Eternity's Gate with William Defoe.

Of the movies I have watched and there were a few I chose not to watch - BlackKKlansman, Vice or Black Panther, I have to say I enjoyed The Green Book the most.  I even watched a movie that was not nominated but which I thought I wanted to see with Robert Redford. A true story of a bank robber.  Sissy Spacek was in the movie as well. It was okay but sure glad I did not pay a lot to see it at the movies.

Then a trip to Comonfort, a town about 20 miles from here and then on to Escobedo, a village where the French cashmere factory is located was on the agenda.  There is a great restaurant on a hillside with a cantera shop next to it.  I had not been there in at least fifteen or sixteen years, but the food and the views are still lovely.  Here's a couple of photos while sitting on the terrace for lunch. 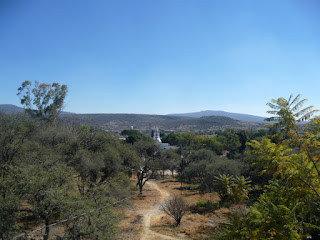 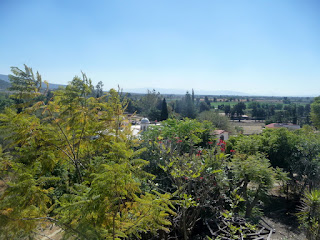 It was fun to get out with friends into the countryside.  Plus, while in Comonfort, I purchased two big baskets to use for some plants in the house.  Comonfort is THE place to go for some of the same things that you can find in SMA but for a lot less pesos.  A four hour excursion reset my mind to want to do more excursions out of town...........soon.

Then at the beginning of this week, a friend who I met through blogging, brought forty people from Merida to San Miguel on a tour.  My friend and her husband own a tourism school in Merida.  Very interesting people.  Her idea to have a "cultural" exchange was fun.  It was set up to have a couple of speakers, with my son included to discuss real estate, and a couple of speakers from Merida.  Casual and interesting.  Joanna had refreshments set up for everyone at the Aldea Hotel and the room was full.

Two people who read the blog came up to introduced themselves to me.  One had even tried in the past to rent the guest house, but, at the time it was occupied.  It was fun to meet all the people and to have some very interesting conversations.

Maia Williams, from SMA and very involved in the Literary Conference and the group in San Miguel who is involved in writing and poetry spoke. John spoke and the two people from the Merida area. 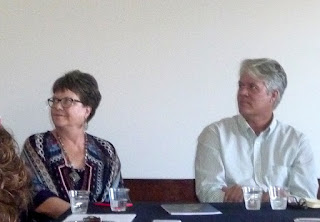 My favorite photos to share with ya'll, however, are the two below.  On the way to the Aldea Hotel, with my son driving, in front of us was a truckload of boys.  I noticed them because all of their shirts said "Fly Emirates"!  My first thought was, "Do they know what that means?" And, since I have never seen an Emirates plane in Mexico, it was a curious sight.  So, I decided to take a photo since I was a passenger and not driving. 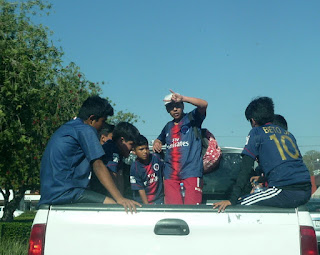 The boy in the middle immediately noticed I was taking the photo.  I waved to him and he gave me the peace sign.  He was smiling and then his friends looked up and some of them smiled as well.  They got to their destination before we did.  As they got out of the back of the truck, all turned and waved to us!

I LOVE living in Mexico!  You just never know what kind of sights or adventures are going to happen............

Another trip out of town is planned for tomorrow.  Woohoo, life is ALWAYS an adventure!

Emirates advertises on many soccer jerseys. These boys, I believe, are wearing jerseys for the St. Germain soccer club of France.

Fascinating information Clete! Thanks so much. Did you notice the kid with the jacket that has Beto in gold letters on the back! He could probably sell that for a lot if Beto runs in 2020~ ha.

It is always special to meet a blog reader but so many at once is extraordinary. I have the same feeling that my blog reader knows so much about myself and my life and I not so much about them. Yet it is like meeting a long lost friend. What a wonderful few weeks you are having.

Who or what is Juan's re obtaining the movies?

Contessa, it IS like meeting a long lost friend. Great description.

Juan's is a cafe here where you can buy DVD's for 45 pesos. I think
the actual name of the cafe is Cafe Etc. and it is alongside the Bibliotecha
here in SMA.

He always has the latest movies as soon as they come out in the movie theaters and lots of foreign films which I enjoy immensely.

Well, it looks like you're enjoying life, which is good to see. Does John ever get involved with remates (foreclosures) in the real estate business? That's an area that I'm interested in exploring in more depth.

Kim G
Ajijic, Jal
Where the days couldn't be any more perfect.

I have never heard of a foreclosure in SMA. Since all home sales are full cash, and no mortgages, how could there be foreclosures? Unless someone did not pay their annual taxes, but they are so low I could not imagine that......

Look for foreclosures in the Houston area after people were flooded out, were not reimbursed and many walked away.......Sad, sad stories.

Glad you are happy in Ajijic!