Many years ago I found some gift wrapping paper that said "Same sh--, different year".  At the time I
thought it was hilarious and bought it.  Others found it humorous as well.

Well, 2019 is fitting that bill.  It had no sooner started then the "Fuel crisis" began.  Although at the time, we all thought it would be a short lived few days.  Au contrare!  It is worse then ever now.

It wouldn't have mattered to me in past years, as I could walk down the hill to buy or do anything I needed to do.  However, now, living on the edges of San Miguel, it is a big deal - especially when I
have not had gas in ten days!  At least not enough to go somewhere and get back as well........

I know, I know, never let it get below half a tank.  That has been my mantra for all my life, but somehow with the holidays and all I goofed!  Big time.  You can rest assured, once I do get gas
it will never happen again. 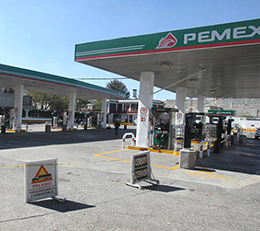 Either the many stations are not open at all or the lines, I'm not exaggerating, are miles long.  Miles.

Yesterday I had made plans to go to lunch with a friend who has just returned to San Miguel.  The restaurant is on the other side of town from where I now live, but right near where I used to live.  But, since I would need transportation, I called a private driver that I had used previously.  In fact, I called him the day before to confirm he had fuel, that he would be able to pick me and my friend up at her house and all would be well.

Well, he not only never showed up, but he had turned his phone off.  Rather then get upset, I realize that he somehow had no gas and did not want to disappoint me.  I waited twenty minutes, then called a taxi service, who, thankfully, was answering their phone and they had a driver here in less then ten minutes.

In no way could I have imagined the lines of cars attempting to get gas as I saw as we went to pick up my friend.  Mobil, Shell and Total now have stations in San Miguel.  The only problem with that is they get their fuel from Pemex, with the exception of Mobil who has their "own source".  So, the line was from the Mobil station all the way to the ring road around town called the libramento.  In fact the line went all the way up the hill of the libramento.  It was unbelievable.

Needless to say, the "crisis" is growing!  Some people are trying to go out in the middle of the night in hopes of avoiding the lines.  I considered it and then decided, with my luck, it was not a good idea to be out on the road at 4AM!  Call it wisdom or caution, whatever, I'll wait. My plan is to continue to hunker down and be patient.

If you want to read an in depth article by Rolling Stone magazine, here is the site address.  www.rollingstone.com/culture/culture-features/drug-war-mexico-gas-cartel-717563/.   The problem is that there is not an alternate plan since the new President of Mexico has shut off the fuel lines with his original intention of using tanker trucks and then discovering that there were not enough tanker trucks or police to escort the trucks!

Yes, I am getting "cabin fever" as since the 4th of January I have been out a total of four hours not counting yesterday and then only for necessities at the grocery store.  Yikes!

The answer for me is to just read a new good book, which I intend to start today.  Nothing makes the time pass faster.

The good news is there are VERY few cars on the streets of San Miguel, with the exception of those in line for gas.

Life and life in Mexico is ALWAYS an adventure!  VIVA MEXICO!
Posted by Babs at 11:13 AM

I just read Educated and I like the book. If you are looking for one, you might give it a try. I'm hoping to get gas later this week. At this point I'm a little below 1/2 full but I'd feel better with a full tank. I heard that the situation should start to get better after Wednesday. I'm not making a bet on that information. LOL

Hi Billie, You are the third or fourth person who has recommended Educated. It is the next book that I will get after reading the last in the trilogy from Carlos Zafon which is 800 pages long. I also have "The Line Becomes a River" by Francisco Cantu to read. Someone recommended it as well. I HOPE your info about Wednesday is correct! There are so many things that I put off BEFORE Christmas that I need to do, if possible, sooner or later, ha. Miss seeing you. Come see me soon!

Babs, are the buses AND taxis on the blink as well? We’ve always used public transport in SMA and if they are compromised by the shortages, I would expect quite a chaotic scene there! A good coffee or glass of vino with a pleasant book seems a viable alternative to the aggravation ! Cheers!

Hi Dan, I can't get up the stairs of the buses. On Sunday, tthe taxi I had arranged never showed up. My friend who was meeting me there could not find a taxi company answering their phone. I, luckily, reached Executivo Taxi and they sent someone.

In the trip from Los Frailes to Balcones, I only saw FOUR taxis on a Sunday during mid-day. The rest, I presume, were in line trying to get gas.

MY solution is to realize, as much as I want to see friends, until this is over, I'm homebound. Yesterday I baked chocolate chip cookies for the grandkids and this morning I made a wonderful breakfast for myself. Now I'll settle in with a good book.
I enjoy being home, most of the time!

Just after reading your blog post, I read an article on Mexico News Daily that gas stations in Guanajuato state will import gas from Texas. Mobil is already receiving Texas gas, and a rail shipment for Total should arrive Wednesday. How quickly it will arrive in San Miguel is another story, of course. Enjoy your books!

Thanks for the info Deborah. Hopefully today or tomorrow, I'll get gas. I've been keeping up with all the info on the FB page of More Security for San Miguel. They are now posting what stations are open and have gas! Just discovered the site yesterday. I'm reading a lovely book right now, so am most content at home!