The rainy season usually starts out with a stutter in mid-June after all the rain dances and festivities and fireworks to start it.  Then it goes on into a crescendo of rain usually in August and ends by the end of September.

NOT this year.  It began on June 10th and so far we are close or  have exceeded twenty, TWENTY, inches of rain!  During a whole season, we are thrilled if we get between twenty-four and twenty-eight inches.

This has caused all of us to modify our lives.  Again, USUALLY, the rain comes at night.  Not this year.  Do you think there is such a thing as climate change?  Wow, this has been something.

Massive flooding.  Bridges washing out.  Road to Cieneguita, which is a little community near here is washed out.  And when the bridges wash out, the people in the communities around San Miguel are stranded such as in Banda, San Miguelito, Atotonilco, etc etc etc.

The massive flooding comes from the arroyos that empty into the Rio Laja which travels north and south.  Yesterday I saw photos of Celaya, a major city about forty-five minutes south of here.  The flooding around the Honda car manufacturing plant was monumental.  No way you could even get near it.

Add to that, right outside my windows, it is possible to look at the Hotel Aqua and see that AGAIN it has been flooded.  Last September 27th, while construction had just started to renovate an old hotel and add to it, the property flooded.   Since that time, I've lost count of how many dump truck loads of dirt have been brought in to raise the land for the new construction.  It obviously needed about another hundred dump truck load of dirt and boulders.  If that would do any good...........

Below are the latest photos taken Thursday morning.  Hard to believe that the hotel company, Live Aqua, who owns and operates many other properties in Mexico, did not do enough due diligence to know NOT to attempt to turn a wetlands into a hotel property.  After all, Club Med abandoned the project back in 1983 after a year of attempting to build and it then was flooded.  It has sat vacant since that time.

Over the eighteen years that I have been here, it has flooded at least a half dozen times.......It will be interesting if, when it is completed, the City of San Miguel gives them an occupancy permit, if they even do that in Mexico!! 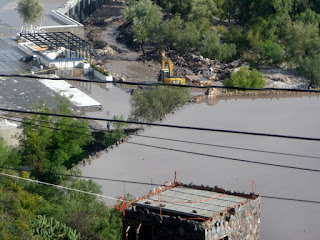 Note the water rushing over the edge of the presa.  I would guesstimate it is at least thirty feet above the hotel and therefore, no amount of fill dirt is going to stop the flooding.  Also note the bulldozer which is trying, in vain, to put boulders and push dirt, to stop the flooding.  And, thirdly, look to the right of the bulldozer and you will see the rushing water going down the arroyo while the rest of it runs through the property........What a mess!

Today, as I look out, we have not had rain, finally, for twenty-four hours - thank goodness, and the water is down.  The hotel is being cleaned up and the swimming pool, which is that long narrow hole at the end of the black metal structure, is being drained and cleaned.

Someone suggested that maybe they need to introduce gondolas or kayaks to get guests from their rooms to wherever.  A fun idea under the circumstances.

It will be interesting to see how this proceeds.
Posted by Babs at 11:23 AM

Good grief, what a disaster. You can't mess with Mama Natura.

Indeed, that is for sure Peter.

What continues to boggle my mind is how projects like that are allowed to go up, despite the dangers of flooding. And building dirt barriers to keep the water out of the hotel only forces to go elsewhere.

I understand that the luxury homes by the Obraje subdivisions, by the arroyo that goes past the Fabrica, were all flooded a couple of years ago. I wonder how they did this time.

Be glad you live up in your perch, from which you can take pictures.

I am Al Cuban. I'm sure anyone who flooded a couple of years ago, flooded this time. The photos I've seen of Celaya, the road to Delores, etc etc etc are mind boggling.