Last time I wrote a post, I was in Hot Houston.  Now I'm back in San Miguel where the nights are in the 50's and the days in the mid to high 70's.  Aaaaah.

It has been quite a month.  Back in SMA since the first of June, it has been a time of reorganization, reconnection, getting stronger and resting.  In fact, today was the first time that lunch has not been at home.

It has been GREAT to be back home......except for the fifteen stairs that it seems that I traverse at least ten times a day.....at least.  But, on the bright side, they certainly are strengthening my legs.
A good thing.

Yesterday I managed to get to the third floor to take a few photographs that I had promised to share of the new Aqua Hotel along with photos of the new road next to the house. 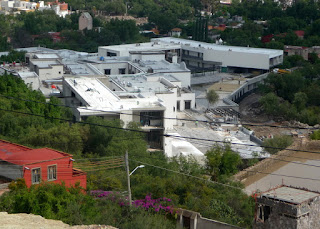 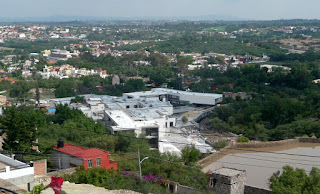 The Aqua Hotel has more then doubled in size since the beginning of the remodel and expansion.

In the past, when there were floods, photos showed the water streaming through the property.  The only change that I can tell they have made is to elevate some of the spaces to an additional story to
help during the rainy season.  I have not been inside the property as yet.  It will be interesting to see it from the inside looking out when completed.  When that will be is not something that I have seen published anywhere.  It appears to me that it probably is at least a couple of months.  (you can click on the photos to enlarge).  Word is that it will be a 5 Star property.

Other exciting news, the dirt path alongside my house with the name Cuahtemoc, is now turning into a cobblestone road with sidewalks on each side.  Those sidewalks lead to the large pavilion which is
the "feature" in the new park on the hill.  It was possible yesterday to photograph Day 3 of the cobblestone work. 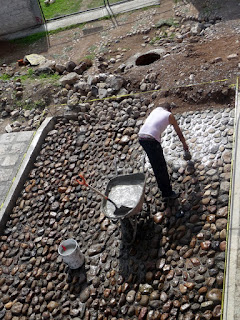 This is at the intersection of Cuahtemoc and Cuitlahuac.  Note the big sewer hole.  Prior to the cobbled work, two cars have gotten stuck in that hole!  Yup, no signage saying "Peligroso" or anything. 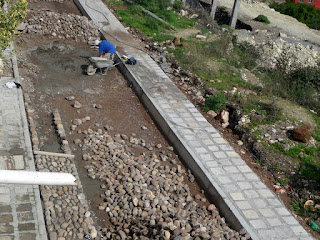 This is VERY labor intensive work.  The top photo shows the man putting another layer of concrete around the stones.  Each and every stone is selected and placed from a huge pile.  They are fitted into sand and dirt, then concreted and then concreted again.  At times there has been one lone man doing this work.  Yesterday there were three!  They still have a long way to go.  First they do one side of rocks, leaving the middle barren.  Then the other side, and finally fill in the middle.  Awesome to watch. 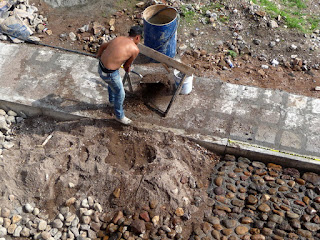 This worker is taking sandy loam, sifting it through screening to get rid of debris and then using it to make concrete!  The blue cylinder above him is full of water for the man who is spreading the concrete in between the cobbles with a plastic bag with a hole, kinda like a pastry bag. 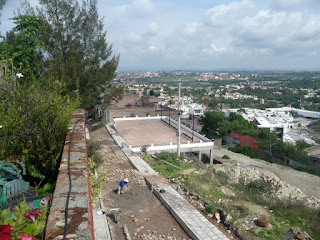 The large platform on the right side is where parents and kids come in the evenings and throughout the day to stand and look at the canyon or, in the case of the other evening, a soccer game happened right there behind those benches.

From all the excavating and  jack hammering and everything else that has gone on for over a year, it is wonderful to know that this park will be used by the kids and adults of this area.  It will be interesting to see now that they have basically destroyed the cliff side, how they intend to finish it up and landscape it.  No idea when or if that will happen.

Never a dull moment in Mexico..........change seems to be happening all around.  Stay tuned for
more info on other "stuff".

By the way, there was a little snafu in allowing people to comment.  It is fixed.  Also corrected has been the ability to be notified and to monitor comments.  Thanks to each of you for each and every comment.  A few more steps to correct a few more things, but at least now you can comment and I can see those comments..........

Your night time temperatures sound perfect to me.

They are Steve as well as the daytime ones. We
sure have had a massive amount of rain though in
the last two weeks.

Babs, do you have any idea of how the hotel plans to divert the food waters from the press? I’ve seen it in full flow, and it was rather impressive! Cheers

The Aqua Htoel is aptly named, it will be interesting to see how they have diverted the floods. Hope your knees are feeling good. Welcome home to your beautiful casa.

Dan, as I said in the blog, as far as I can tell, all they have done is build that wall and elevate the outside rooms. It will be interesting to see what happens in the near future when they open the dam in the Botanical Gardens which should happen soon, as I believe we have had about 10 inches of rain already!

Indeed Peter, I chuckle to myself each time I write the name......My knees are still not hurting! Now my back is out of whack! But, I'm working with a physical therapist to strengthen me, and hopefully in a couple of months I will not need a cane, which REALLY slows me down......Good to hear from you.

So happy to hear your knees are doing well, being able to walk wothout pain will make a huge difference in your life!

It's terrific to hear that you're happily back home and seemingly back to normal speed. Looks like the street paving work is going very well. Certainly there's a right way to do empedrado and a wrong way. Ajijic seems to have specialized in the wrong way; the streets there are a holy terror for both pedestrian and motorist alike.

I'm glad you got your commenting system back the way you want.

Kim G
Redding, CA
Where not being able to comment is akin to being confined to our room.

Every time I go by the hotel I shake my head. Aqua Hotel is a spot on name. I await to be convinced otherwise. The hill they've stripped just makes me sad.

I hope that new wall doesnt divert the water flow into the adjacent neighborhood and flood those homes :(

Croft, not having the pain in my knees is wonderful. Now if I can get the stenosis in my spine to stop hurting I'll be able to walk mostly upright. Someday I hope to be without the cane. Doing PT now. Thanks for commenting.

Thanks again, Kim for helping me to get the comments back! Did things work out in Ajijic? I have not fixed the moderation on the blog yet. In the meantime, I'm checking the comment section.....Like hearing from everyone.

Barbara, that hillside was so beautiful. I had sown lots of wildflower seeds plus the ones the birds spread. It is a blight now. I'm so hoping they have a 'grand plan" other then more concrete! And, the hotel, well, what can you say that hasn't already been said each time it has flooded......

Rick, I'm not sure which wall you're talking about = at the hotel or in the park.
The new plaza is raised and it is empty below except for more concrete. It remains to be seen how it is going to be when finished. We have had MUCH rain and the steep streets turn into torrents, like a river. I like being on top of the hill.

I love it when you return to San Miguel. In all your return blog posts you always sigh that wonderful "it's good to be back" or "it's good to be home". San Miguel de Allende is, also, smiling to have you back. Saludos, Robert & Colleen