Dr. Wayne Dyer said in one of the many self-help books I read about forty years ago, "Guilt never changes the past and worry never changes the future".  I had forgotten that quote for a couple of
days.  Shame on me. 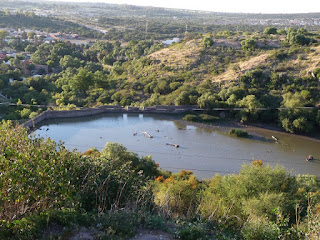 If you read the previous post, you know I was coming unglued worrying about the insurance situation, how to handle it and what would happen.  My surgery was already scheduled and I was hoping that somehow I would be there for it.

Seriously, ever since I was awakened by my brain at 1:30AM on Sunday morning, worry has been my middle name.  By this morning, after reading all of your emails and comments along with all my ruminating, I still had not made a decision how to handle the issue.  That is not like me.
Usually I make a decisive decision and go forward.

I got up at 7AM this morning ready to tackle something, somehow.  First I called the Baylor Orthopedic clinic which connected me with insurance verification.  I spoke with a very kind, efficient, woman named Michelle.  I told her the situation, gave her the information that she asked
for and I requested, well pleaded, for her to find out and call me back.  She said they usually did not handle it that way.  I told her that I had not slept for two days and she said she would get back with me.

She did.  The news was not good.  With the information that I had given her, she was told that I was no longer a customer!  Oh my.  She said I would probably have to find another insurance company and apply and try to get a new policy somewhere for supplemental insurance.  Okay...........

Then I called the bank to see what they knew, which was exactly nothing about the fact that the premium deductions had not been paid since 2016.  She said I had to talk to the insurance company.

As I dialed that number I felt like I was calling "the devil".  I'm seldom scared but I was quite stressed and a bit scared.  I told this to the young man that I reached on the phone.  His name was Tollis and we probably talked for at least 30 minutes!  First of all, I had inadvertently given to the insurance verification woman a number that is no longer used at this company as a member group number.

It seems that in 2016, the company changed their systems and "lost the information on quite a few
customers".  I was one of them.  I was still in the system as "active".  I could not believe my ears when Tollis told me this.  You see, he took enough time while talking to me to ask me which membership card I was using. The "old ones" or the "new ones".  Since there was no issue date on either that I had, I had no idea.  Once we resolved that and I found out that the info was different then what I had provided to Michelle.  That information was what elicited the info that I was no longer an active customer.

Now Tollis reassured me that I would not have received a notice of a premium increase if I was not still an active customer.  THAT fact allowed me to pay the back premiums for all of 2017 and all the months of 2018 plus December of 2016 so I could be current.  My insurance has been reinstated
and I'm now exhaling with relief.

I can leave for Texas knowing that we can proceed with the doctor's appointment and the surgery in mid-March.  No worries.  Whew.

Thanks to each and every one of you who cared enough to comment or send me an email or called me with suggestions.  I SO appreciate each and every outreach.  It is wonderful to have such great
support.

You had me checking my supplemental as well. Seems to me you went about this in the proper way and proper order. Your positive result gives us all hope that glitches don't always have to take us down. Thanks for sharing this with us. Things are looking up for you. Now on to the best part.....becoming bionic. We'll be sending positive energy.
Saludos, Robert

I am so glad to hear that that the problem is resolved, and that you can go ahead with your surgery plans.

I'm very happy for you, you deserve to be taking care for after all these years working and paying for insurance. And your experience make me think about the benefits of the health system in Canada and other "socialists" countries where people don't have to deal with so much bureaucracy, rules, etc. It's so sad that so many Americans have been brain washed by propaganda that they think that a universal health care system is bad for them. Oh, well, sorry I got caught in politics, but again, I'm very happy for you, you are a very positive person and I get inspired by your posts sometimes. Saludos, Carlos.

Babs, so happy to hear this! Now, you can SLEEP! All the best, Robin

RP, glad my situation caused you to check your supplemental! Keep sending that positive energy - especially on March 14th. I'm ready to throw that darn cane away.

Carlos, I always love hearing from you. I appreciate that you take time to write sometimes. I'm all for Universal Health Care...which is kinda what Medicare is for people of my age. I choose to pay for additional insurance, supplemental, so I don't end up paying for the other things Medicare does not pay for....
Thanks for your kind words. Maybe our paths will cross some day.

Brilliant! Onward you go and get that knee fixed. You rock young lady!

Thanks Peter - Rock and roll as I walk right now, ha.
Better soon.

Barbara, Indeed, VIVA Tollis. The weirdest thing happened yesterday.
I could hardly believe it. After all this happened early in the morning,
I went to pick up my mail. For the first time since I've had the insurance
I had an invoice from the insurance company for the amount of $2300.22 which
is exactly what I had paid earlier that morning for back premiums. That mail sitting at La Conexion must have been what prompted me to remember the premiums! How
spooky, huh?

So refreshing to read a story about an insurance company and a bank with a more or less “happy ending:” usually they end badly! And thanks for sharing your experience so honestly. I’m sure many of us will now keep a closer eye on our automatic payments.
Best wishes for a successful surgery & speedy recovery!

Thanks Deborah! I was impressed with the helpfulness of everyone (4 people) that I spoke with yesterday......It cost a lot of $$ but it is ok, I guess. It is behind me and I can concentrate on the next episode! Yes, I'll watch my automatic payments like a hawk in the future! Thanks for the good wishes.........

Well, I'm very glad that you were able to straighten things out. What is it with insurance companies anyway? I'm constantly getting new cards from them, and various letters. None of these things have dates printed on them, neither membership cards nor the letters. And since they're bulk mailed, there's often not even a postmark date on the letters either. It really makes things hard to untangle if you aren't vigilantly opening everything at once and dating it yourself. This lack of dates seems to be a very bad business practice in my opinion.

Anyway, I'm glad you will be able to move forward with the Bionic Barbara Project.

Kim G
Redding, CA
Where we just dealt with some auto insurance snafu.

Whew! What a tale and so glad you were able to get it resolved. One does need to keep tabs on providers.

My snafu was with my online account. I was having trouble logging in and called customers service only to find out if six months has passed since you last logged in, the account is inactivated without notice to the customer. And they wouldn't simply reactivate it even after answering all the questions to prove who I was. I had to create a new account, with a different username.

Scott, not sure I understand your second paragraph.........BUT thanks for
commenting.

My insurance provider was still withdrawing the premium each month but I couldn't log into their online system because I hadn't accessed it for more than six months. I had no claims but had moved and simply needed to change my address. I had to create a new login instead of them making the old one active again. And I couldn't re-use the same username.

Goodness gracious Scott. Life is not always simple. I have a bank acct here in Mx like that. I gave up and now just call the bank officer if I need info on that seldom used account!

Kim, sorry for the delay in responding. I've been on the road in a failed attempt to get to Houston. That's another story!

Your point that they have no dates on the letters or postmark on the envelopes is so important, IMHO. How can you refer to anything? BAD business practice, indeed.

Anyway, my saga continues - the insurance snafu is over but there are other things happening now. As Rosanna Dana used to say, "It's ALWAYS something"

I just don't understand how they could let you get that far behind in payments without notifying you!

Croft, according to the Customer Service rep, Tollis, they lost "quite a few customers records in 2016! In fact, he did not even have the info on my bank of the acct # or the routing #, which slightly freaked me out. Ironically,the very day that I got this all straightened out I received an invoice from the insurance company in California for the exact amt that I paid that morning. So, I guess it took them that long to retrieve
the records of who owed what! Amazing, isn't it?