If you have been a reader of this blog for much time, you know that one of the many highlights of my life is leaving the mountains of Mexico each January and February for the coast of Mexico to enjoy
the warmth, the water and all the other good things that beach life provides, like good seafood.  This year was no exception. 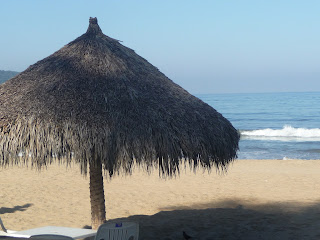 Although this trip was different in many ways from previous jaunts to the West.  This time, it was a bus trip rather then the car.  It was also not a solitary trip because many dear friends were on the trip as well, which made it extra fun.  Usually I am at a beach with no people, but this time, there were people everywhere.  At first I was dismayed, but then I got into the rhythm of watching all that went on along the sand and ocean.  I learned that I could sit in a lawn chair and buy all kinds of goodies as the vendors come to you.  It was fun.  I bought purses, blouses, a dress and goodies like muffins and fish.  What a life! 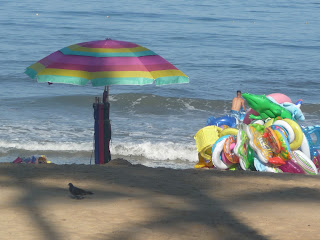 There was the balloon person.  It was not possible to tell if it was a woman or a man.  I saw the person come down every morning and walk the length of the bay and come back in the evening!  It was a walking balloon fest with feet. 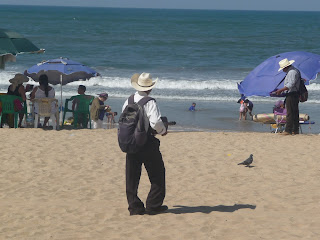 The musicians walked the beach as well daily looking for a gig.  First it would be the fiddle player, then the guitarist and sometimes the drummer, with his whole set of drums tied to his back! 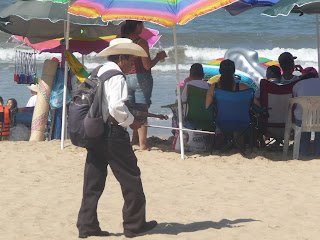 My oh my, there perseverance was a sight to behold. 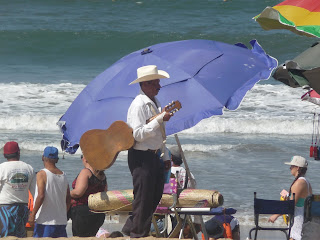 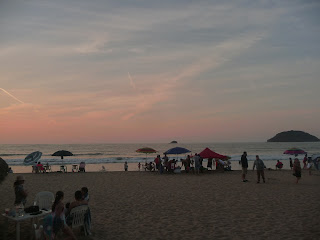 This is about how full the beach would be most days, except on Sunday it had way more people 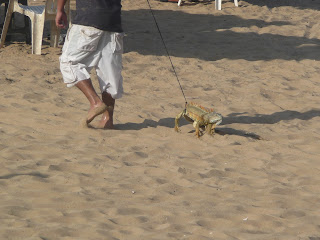 And, yes, that is an iguana being brought to the beach by its owner.  Not sure that he was happy about that, the iguana that is! 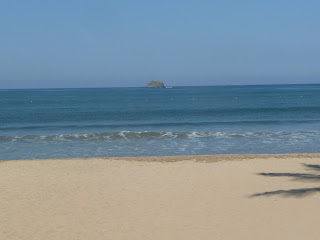 I only saw the beach empty like this one morning early before all the vendors, beachgoers and walkers arrived. 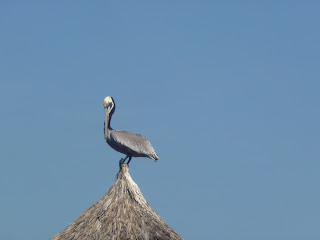 The pelicans arrived each morning to watch over the vendors cooking fish and shrimp on a stick. This one is perched on the very top of the palapa roof.  Believe me, no other pelican tried to get up
there with him.......He was ruler of the roost.
. 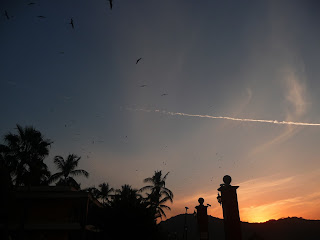 The sunsets were not spectacular as they were not over the water.  But the softness of the sky was still a pleasure to see.

No, I did not go on the whale watching boat.  Although friends did and saw about ten whales while they were out there.  After they described how you had to get in the boat from the water, etc., I decided that with a cane, I probably should wait til another year.

To make up for not going on the whale watching trip though, a group of us went to the  mangroves about an hour and a half north near San Blas.  There we saw many, many crocodiles along with egrets, great blue herons, among others. My photos of the camouflaged crocs did not show well. 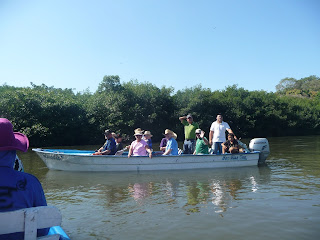 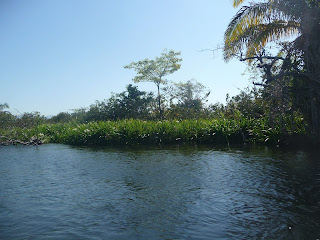 The white rain lilies were huge as were the bromeliads in the trees.  Lovely to see. While
in the mangroves we stopped for lunch at a little place and had absolutely delicious food.  We were
all amazed that in the middle of nowhere they could produce such great lunches.

We drove back to Guayabitos after that and unfortunately had to head home to SMA in a day or so
.
The bus ride home was 10 1/2 hours!  Luckily there is a brand new toll road that totally bypasses
Guadalajara!  Now I know I can drive to my usual beach spot and avoid going through a city of over
eight million people.  It was the nicest, straightest toll road that I have seen in Mexico! 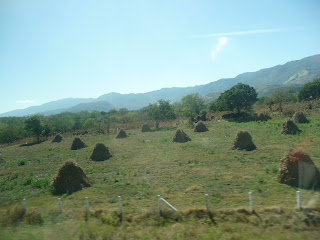 The ride was long, but the views out of the bus window were beautiful.  Here is a field cleared with hay stacks. There were fields of agaves since we were near Tequila.  In addition we saw fields of strawberries and sugarcane. 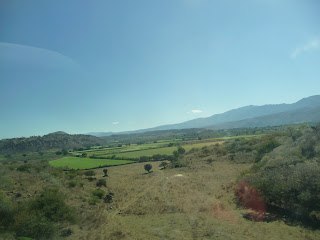 Driving through Mexico is always, for me, an exquisite sight.

When we rolled into SMA on Thursday night, the temperature was forty degrees lower then where we had been at the beach.  Wow!  It was a shock to the system.  Luckily, it has warmed up and in the daytime is getting up in the low 70's but still is about 33F at night..  Hopefully only about four more
weeks and we'll be in our Spring.  Hopefully.

I'm freezing in Mexico City. Friends of mine who spend the winter in Progreso, Yucatan, are freezing too. Glad that the cold wave did not reach your Pacific beach, and that you enjoyed the warmth.

A nice get away from the chilly mountains. You just might need to go back. Spring is just around the corner...

Didn't know there were alligators out there. Try to go see the whales if at all possible. That's a treat. And enjoy the solitude to read. Lots of good stuff out there with politics!

Peter, I SO hope Spring is just around the corner....see above.

Al - There aren't alligators but crocodiles, all up and down the Pacific Coast. I am reading a fantastic book about a British man named Stein who recovered the Buddhist scrolls in 1907 in Turkestan and his travels to get them back to Britain and India. Fascinating....NO politics for me.

Let me have the full title of the book and I'll download a sample from Amazon. We're headed for the beach on Feb. 5 for two weeks and I'm collecting reading material. No POLITICS for me either.

I'm reading "Ghosts of the Tsunami" by Richard Lloyd Perry, about the recent earthquake and tsunami in Japan and how the people there handled the tragedy. Japanese are decidedly different from Americans. It's beautifully written and fascinating too.

Al, unfortunately, I've been back since Thursday night! I'll email to you the name of the book and a few others that i thought were exceptional...Glad ya'll are headed to the beach...wish i was returning.

Lovely photos. I worry about the cold in SMA although moving there from Toronto you might not believe it. I guess the idea of no central heat is the worry. Do you have heaters in your house; heated mattress pads or blankets?

We are heading to Rincon area tomorrow. Happy with our temps here in Mazatlan but our friends are calling us.

Mexico 2018, I have all that you mention. I also have a routine to make sure my bedroom is snugly warm before I go in in the evening. Then we learn that as the day warms up to OPEN the windows and doors and let the warm air in...it's the stone houses that keep it cold. It started out at 30F yesterday morning and got to 77F by afternoon.....

Contessa - Enjoy your time at Guayabitos. How long does it take to drive from Maz to Guay?

Glad you were able to make it to the beach. Your annual visit to la playa is something we will copy after we get moved to SMA.
Toes in sand.
Robert
Ashland

Looks like a lovely trip. Ah, I'd love to be on a Mexican beach right about now.

Kim G
Redding, CA
Where we are trying hard not to feel envious.

Kim, I can assure you that you are going to be rewarded greatly
for all the good things that you are doing by helping your MOM.

I'm just getting caught up! Looks like a lovely trip. Love all the beach photos! I love that beach life.

I do too Bec! Especially since it is 31F here this morning.....Wish I could head back NOW, ha.