The other day, as I left the sanctuary of my gardens, to head down the hill to centro, the first thing I saw was that the primary school across the road was having a grand celebration of the upcoming holiday honoring The Revolution. 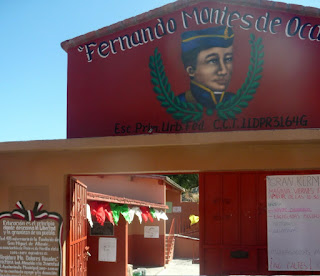 I knew something was going on at 8AM as I heard the six boys and multiple others practicing their bugle playing and drumming in preparation for the big parade on Monday - supposedly starting at 9AM  I say supposedly because I can assure you it will be near 11AM before it gets to the jardin.

Anyway, the boys have been attempting to play the same tune in synchronization for the last three weeks after school, but playing at 8AM, I knew something was up. The drummers are all over the place and never beating the drums at the same time.  I'll look for them on Monday as that is the day that the little children dress up like Pancho Villa and crew to march along.

Honoring the Revolution is a big deal in Mexico.  It is when the reign of Porfirio Diaz ended and the haciendas were turned over to the people beginning in 1911 virtually ending the slavery of the people of Mexico.  Hard to realize that Mexico did not reach real independence until 1917 - only 100 years ago.  THAT explains a lot. 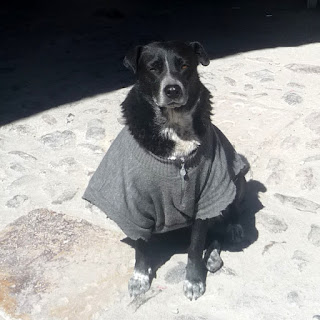 I no longer can walk down the hill, so I drive and park in the same lot on Mesones every time.  Even though the door is always closed to not allow more cars, they always open it for me!  Secret - I bake home made cookies for the men who work there and give them tiny gifts of food at Christmas.  They take good care of me and I treasure them.  As I left the car, the man who gives me the ticket had a new pal with him, the dog above.  I had such a chuckle when I realized that instead of a fancy store bought sweater, he had taken a regular shirt, shortened it and put it on the dog.  When I saw the dog wandering around, I said "sit" and he obediently did so and I took the photo.  To be honest, I could have taken him home with me if it would have been possible.  Look at that face...... 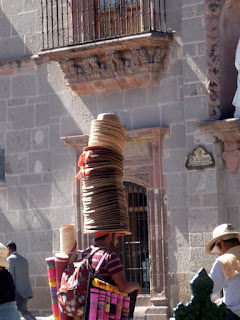 I head to the jardin to my favorite bench when I do go down to centro.  As you know, I like to sit and watch the world go by.  Lotsa tourists in town for the three day weekend.  The previous night the taxi
drivers who took me somewhere were bemoaning the fact that on Friday, all the tourists would be arriving again.  They have.  I've been told there is not a hotel room available this weekend!

When the tourists are coming, the hat guys are there to sell hats to them.  It would be interesting to know how many of those things they sell in a day!  I bet it would be an astronomical number.  That, along with the balloon man, who always has to go back for more balloons in the afternoon. 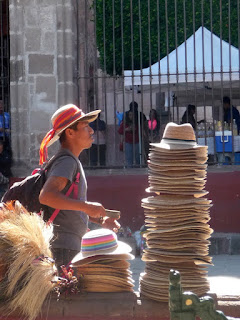 As I was sitting there, a little girl went cartwheeling through the jardin.  I don't know if you can see her arms above the bench.  She went from one end to the other and then......... 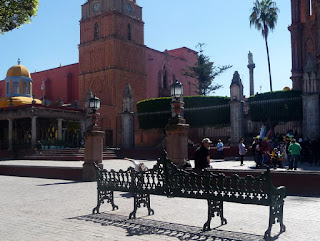 turned around and went the other way.  That's her getting up from a cartwheel in the photo below.
Notice, no one is paying attention.  Hilarious. 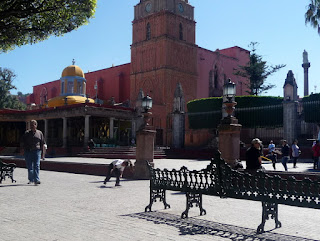 As I was heading home later that afternoon, another scene caught my eye.  It was the guys and gals dressed up as chickens who dance around and wave at people in front of Pollo Feliz, a local chicken
restaurant, that is loved by the locals.  Obviously they were having a conference or something and no antics were going on.   The parking lot at Pollo Feliz, which is the largest restaurant parking lot in San Miguel, was packed with cars. 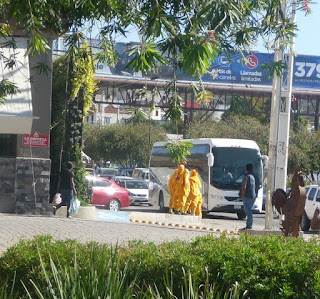 Life is NEVER dull in Mexico or San Miguel for sure!
Posted by Babs at 10:23 AM

A beautiful day in paradise! Cookies and treats will get you everything...

Welcome back dear lady...you have made many very happy that your hiatus was short-lived! Abrazos from Chapala/Ajijic!

Peter, the first time I took the Christmas cookies to the parking lot man, the look of shock and surprise on his face was priceless. So, I continued intermittently taking things, never expecting anything in return. Well, after all these years, his kindness in letting me in the lot is such a welcome thing!

Charles, thank you so much. I'm glad it was short lived as well otherwise I could not have shared that dog picture that I did share today.......

Lovely snapshot of the many things we love about Mexico and SMA... am introducing my middle sister to Mexico in March on a “sisters trip” and these stories are a great way to give her a flavor of what she will find. We have many hats from the hat guys amd love talking with them. Thanks for everything you notice and share

I am so thrilled you've decided to continue your blog. As someone who has visited and loved San Miguel, I live vicariously through your posts. I too, loved just sitting in the Jardin and watching the world go by.

...and isn't it amazing what happens because of a simple, small act of kindness?

My youngest granddaughter cartwheels wherever she is....lawn, stores, house, etc. If I saw this little girl I would be nostalgic. I'm heading to Sonora for 3 months soon. Hope to get back to CDMX. Love that city I stayed at Airbnb but want to stay in the bed and breakfast that you stayed in eventually. And still hope to get back to SMA one of these days. So glad you're writing again.

Laurie, I should be here in March and hope to meet you and your sister in the jardin! Hopefully you found a rental.

Ahh, Splendid, it is indeed amazing to see what happens from small acts
of kindness. I witness them almost every day here.


Jvineyard, how is Sonora? How is the weather in the winter? With the
inexpensive airfares on Interjet and Volaris, we now with our discount
card can fly just about anywhere in Mexico for not much more then $50USD!

I've never stayed in a BandB in CDMX. Always at the Catedral, the Marlowe,
and a couple of other hotels near the American Consulate office. Thanks for
commenting.

My mistake. I thought I heard about The Red Tree House in Condesa from your blog. Anyway, want to go there.
Sonora gets cold at night. I'll check out the airfares to SMA.