"Waves of Tourists Rolling In"

For the last five weeks, while the school kids of Mexico have been on vacation, and even though we
are totally inland in the mountains, it HAS felt like waves of tourists have taken over the town. 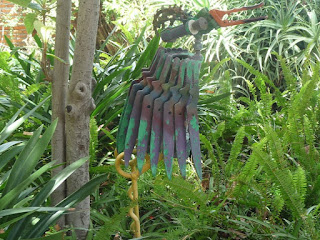 Instead of photos of gridlock traffic or streets and sidewalks packed with people, not to mention the restaurants, I thought a scene that my seven year old grandson took of the bird from Forevertron in
Wisconsin, who resides in my garden, was more tranquil.

To what do we owe these "waves of tourists"?   Several factors.  There has been a diligent campaign within the country of Mexico to bring more Mexican nationals to San Miguel.  Add to that the plethora of new cars, the much better highways to get here and an increase in income for every day
citizens.  It has been a perfect storm.  Well, perfect to some but not to others............

The roundabouts to arrive in San Miguel have been clogged with traffic arriving from Estado de Mexico, primarily (Mexico City), Michoacan, Sinaloa, Cabo, Tamaulipas, Nuevo Leon, Colima, Jalisco, just to name a few.  Several of those license plates are from far, far away.  Especially Cabo and Sinaloa.  I have been surprised to notice so many foreign plates instead of our Guanajuato plates.

Our town is very narrow tiny streets - usually one way.  Those coming from far away and have never been here are seen going one way, the wrong way usually, and totally lost and have no idea how to find a place to park.  Hopefully some day soon, the proposed parking lots on the outskirts of town will be built with transportation from those lots to town.

The municipal authorities finally did close all the main streets in centro to allow them to be used for pedestrians only, but that just served to back up traffic even more so.  What a mess.  San Miguel is a town of 67,000 - many a weekend our numbers more then double with tourism.  Soon, however, the kids will be back in school and our streets and sidewalks will return to their normal flow.  No more waves..........well until mid-September, ha.

The statistics that have been released for 2017 showing the tourism numbers for people arriving in Mexico to visit are equally staggering.  In the first three months of 2017, the number of tourists coming from mainly the USA was 9.3 million!  Luckily, most of those are going to beach places.

The number of tourists from other countries for 2016 was 35 million.  With a standing of seventh in the world in tourism, Mexico expects those numbers to continue to climb.

In the forty years that I have either been working or living in Mexico, I have seen this country morph from a country in another century to a country that has much now that is leading edge.  It truly has
been an honor to watch Mexico enter the 21st century and bring so much joy to so many.

Our summer tourist season,one of the busiest I can recall during the past eight years, is still in full force. But it will wind down as soon as the children are once again incarcerated in their classes. Fortunately, we do not have the traffic tieups you have.

Yes, the traffic is disappearing and all are getting ready for the first day of school, next Monday!

The only thing to watch for in Melaque and Barra are the bike riders wandering all over the roads! I drive VERY cautiously when I'm over that way - which, of course, I'm looking forward to come Dec/Jan/Feb!