Every festival in Mexico seems to begin with fireworks.  Today is the same.  The fireworks began early this
morning - mostly in the distance, although there have been a few very close.

Today is the Feast of Santa Cruz.  The Sacred or Holy Cross, or in some countries it is referred to as, the May Cross. 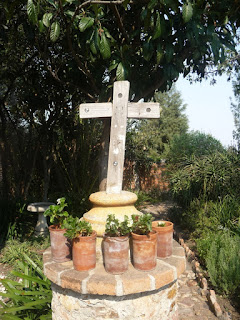 Here in Mexico it is organized by Guilds and Unions of construction workers.  Each building, house or commercial building, is topped out with a construction cross.  At least that is the way here in San Miguel and I imagine it is the same all over the country.  After all, this celebration was brought to New Spain by the Spaniards.  If one ever doubts that this was at one time, New Spain, just look at the calendar of feast days and celebrations.  Then compare them to the Spain of today and you will see the absolute similarities.

Above is the construction cross that was made by the workers probably about thirty or more years ago when these two houses were built by two brothers.  It is not a fancy cross or even a pretty one.  But it
sits in a place of prominence in the garden.  I usually have blooming flowers around it.  Or something to enhance it.  I like the fact that you can tell it is handmade and old.

In other countries throughout the world, especially Malaysia, Bolivia and even Taos, New Mexico there are celebrations and ceremonies.  Most are much grander then our celebration here.  It was amazing to go to Wikipedia and find out some of the history of this day.  Truly surprising.

Emperor Constantine of Spain had a cross made, after he had an apparition one night while in battle, of a cross.  He carried the cross at the front of his soldiers and won the battle. This caused him to convert to Christianity. His mother Helena, who later became Saint Helena was asked to go to Jerusalem to look for the Holy Cross that Jesus died on.  She went and found the wisest men who led her to the site of the crucifixion where after much digging she found two pieces of wood with bloodstains on them.  She took those small boards, placed them on dying people, and they recovered.  She returned to Spain with this story and crosses were made all over Spain in honor of the Holy Cross.

Information also states that in Guatemala, there was already a feast around the beginning of May in pre-hispanic times to ask for rain.  The Spaniards, when converting the indigenous, rolled the Feast of Santa Cruz into the celebrations of the people.

In Taos New Mexico there are major ceremonies at various reservations.  I have witnessed these and been there as they have their corn dances and their ceremonies to ask for rain.  Isn't it interesting that the indigenous ceremonies worldwide are often very similar to each other?

In my little hill top retreat today the birds are very quiet.  The fireworks have stunned them to silence.
Me too.

Viva Mexico indeed! There is always something to celebrate. Such a happy place...

Barb: I'm inspired by the religious faith that led to leave the cross on top of our house all those years. I didn't know that side of you.

correction: YOUR house not "our". We didn't have a cross on ours even when it was being built. We didn't know about the tradition then. God bless you.

Ahh, Al - there are many sides to me! Thanks for the blessing. I'm very spiritual, just no longer religious........although I do love the traditional aspects of things here in Mexico.