A Tribute to BB King in Mexico! 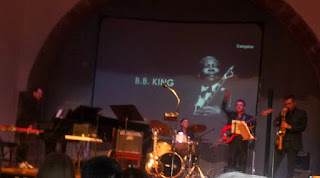 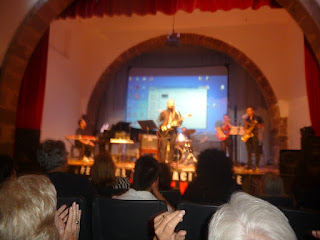 There is always so many kinds of music to enjoy in San Miguel that one could be out every night enjoying blues, jazz, rock, a single melodic guitar or chamber music, just to name a few.  Truly, all in one week!

Last Saturday night at the Bellas Artes in the newly renovated auditorium, it was my turn to enjoy blues, my favorite style of music.  Well, except when I'm listening to something else.

B.B. King has been a favorite of mine since the mid 50's when I first heard him, in person, at the Bantam Club in Baton Rouge, La.  I think I was about 14 years old.  B.B. King was not all that well known as yet nor was Chubby Checker or Fats Domino but I saw them all there.  It was THE great time of music.   The Bantam Club was this dive on Airline Hwy.  I'm astounded that my parents allowed me to go with friends, but, they did.  I'm so grateful.  Recently I asked some people from Baton Rouge if the Bantam Club was still around and they said they had never heard of it.  What a shame!

So, after the upbringing I had of hearing live music in little shanty clubs in Mamou or Krotz Springs or other honky tonk towns in Louisiana, I'm always a little hesitant to hope for the best.  Boy, was I rocked out of my seat last Saturday night.  So was everyone else.

It was all because of a guy named Craig Caffall.  Not only could he sing blues like blues is supposed to sung, but he played the guitar like BB.  The backups were Antonio Lozoya on bass from San Miguel as well as Rick Shlosser on the drums.  And, there was a pianist that was outstanding, but his name nor the name of the clarinet player were not on the advertisement or the ticket stub.  Darn.  They were exceptional.  Both, I think, were from Mexico City.  The clarinet player was exceptional and got great applause each time.

The only thing missing..........a dance floor.  Oh my, I would have kicked off my shoes and danced if there had been a place.  It was THAT good.  Some friends who went with me felt the same way.

The backdrop of the music was a slide show of photos from his younger days to the end of B.B. King.
A very nice touch and a first class production.

It turns out that Craig Caffall has been in and out of San Miguel since he was about five years old.  In the USA he plays with Maria Muldaur.  If and when I'm ever back in the States I will attempt to find out where they are performing.

This show was a benefit for Ojala Ninos.  It is a non-profit after-school education program for indigenous children in rural Mexico.  If you want to know more about the charity, please go to www.ojala-ninos.org.

What was the cost of this outstanding evening here in San Miguel?  Approximately $24USD with the current peso exchange to the dollar!  How sweet it is...........
Posted by Babs at 2:15 PM

The thrill is never gone...what a great night! Hugs from the big city...

Charles, I know you have great entertainment opportunities in Guadalajara. I remember some memorable concerts years ago.

Wow! I have enjoyed concerts here in Vancouver by BB King, Muddy Waters etc.
Even danced the night away with Maria Muldaur on the stage. She seems to have slipped away...

Peter, Maria Muldaur comes down here for a concert or two each year. Usually out in the country somewhere........