WHAT to write about?

Some people say to me that they don't write a blog because they wouldn't be able to think of enough things to write about on a regular basis.  I have the opposite experience.

Today it seems there are too many things I want to write about - such as, GIFF, the international film festival in town til Wednesday.  Then there are more haciendas to share photos of along with murals that have been recently updated at the school across the way!  Books I've recently read and enjoyed immensely could be a topic since I want to tell you about Eric Larson's new book, Dead Wake about the sinking of the Lusitania.
In addition, I've wanted to write about "remittances", which most US citizens are not even aware of along with some details about El Chapo and cartels.  I don't write political blogs although I often have to restrain myself from expressing my thoughts about things such as Trump and Rove.

But, it's Sunday and I don't want to write anything that is not kind. So, no political post.  Or the other topics.

Rather, I'll just share photos taken on Friday, the day the GIFF started.  It was enjoyable to see so many of the first comers in town.  By the end of the festival on Wednesday, it is estimated that 30,000 people will have come to San Miguel for the event. 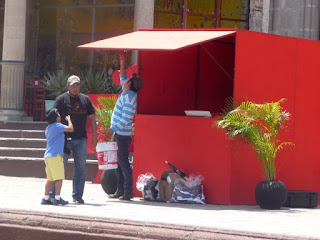 Film stars of the Mexican cinema are being honored.  Turkey is the country being honored as well.  Venues include the area where these photos were taken.  Chairs will be set up for free viewings and concerts.  In addition Bellas Artes, Theatre Angela Peralta and the Santa Ana theater in the Bibliotecha will be showing films.There are even some events at the Cinemark theater at the mall on the outskirts of town.

The photo above made me chuckle as the man is feverishly painting the ticket booth so it can open any minute to sell tickets.  Notice the red paint running down his painting arm. 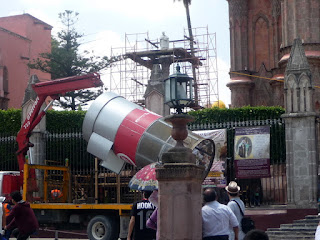 While that was going on this immense truck pulled up.  I've never seen anything like it in San Miguel before.
The projection booth for the screening of the films in the jardin was to be lifted off the bed and stood erect
in front of the Parroquia. 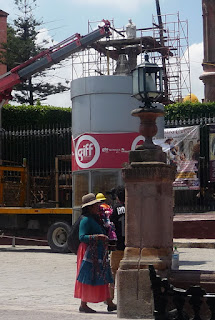 Getting it down and in place took only about 15 minutes!  Amazing.  In the background you can see scaffolding where one of the statues is being repaired.  Of course, the guys all the way up there have no safety equipment on....... 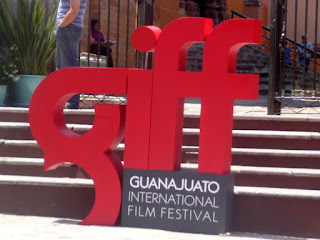 And, here stands the sign explaining what is going on to those who have no idea. 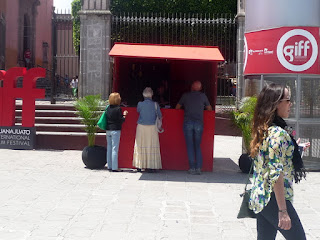 Humorously, the painter no sooner walked off then people started buying tickets.  Hopefully no red paint descended on their heads.

Many of the streets in centro were closed for the weekend.  "Traffic jam" took on a new meaning.  Stages had been set up for events and presentations.  Red carpets had been laid..........and I decided to stay up on the hill after I attempted to get out of centro once I had taken these photos.

As always, my Friday "bench time" was not dull.  It's always something in Mexico!
Posted by Babs at 11:45 AM

I will really miss the film festival this year. But the year they honored Paul Schrader will undoubtedly remain a favorite.

Larson's Lusitania book s one of his better efforts. He has produced a number of clunkers recently.

Steve, I forgot you were here one year for the GIFF. It sure has grown!

I've read all Larson's books. The first was the one about the Chicago World's Fair. I really enjoy his writing style and the amount of research he does.

I don't know which books you're referring to as "clunkers".

This is a great town! There is almost always something exciting going on. Unfortunately this year I doubt that I will see much of the Festival though, but there is always next year!

Absolutely Shannon, there is ALWAYS next year! I just saw Steve's post this morning and wasn't aware of what is going on. I'm going to write a blog either later today or in the morning.........Hope it helps....HUGS