A Scout in the House

There are so many ideas for a blog post today.........the Fourth of July celebrations here in San Miguel; the
incessant rain that has been going on and on and on for almost five weeks; or just the state of things in life, but, instead I thought I would share a few sweet photos of this. 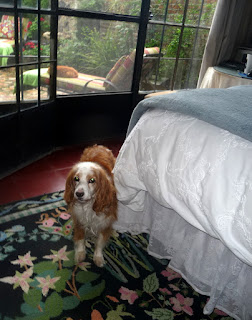 Scout, my son's dog, has come to visit for a week.  He is the sweetest dog, a rescue animal.  Not only is he sweet and loving, he is the best behaved dog I've ever been around.  UNTIL someone wants to come in the gate or in the house.  He even kept Josefina, the maid, at bay yesterday until I could get up the stairs to the front door.

Otherwise he is gentle, sweet and quiet.  Following me wherever I go. 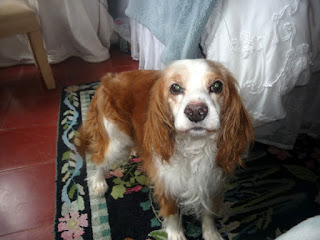 He DOES have a very loud bark and would definitely keep someone from coming into the house. 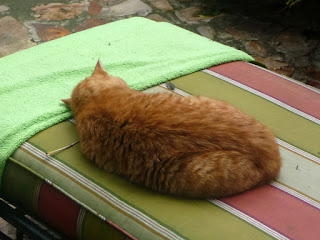 I was concerned about how he and Velcro, the cat,  would get along.  They just ignore each other.  Velcro is not a cat that lays on the floor anyway.  She is always on a piece of furniture.  So at night she sleeps on the bed at my feet and Scout has decided that the sofa upstairs is where he wants to be.

They have not even bothered each others' food!  Amazing.

It has been fourteen years since I've had a dog around the house.  I always thought that Flash was the best dog ever. After all, I had her sixteen years.  She never barked.  So when Scout barks, I jump.  Not used to that loud sound.  He is good about stopping though if you just say No.  And, when the gate to the street is opened, Scout does not try to run away.  Thankfully.  That was Flash's biggest flaw.  She was a gypsy dog and always trying to go off somewhere.   It eventually led to her demise.

Stayed home yesterday just to make sure there weren't going to be any problems and to give Scout a little attention until he adjusted to the new surroundings.  He seems very content.

Off today to celebrate the Fourth of July!  Hopefully no fireworks to scare the dog...........we'll see.

Aw, what a sweet dog! Glad he is adjusting so well to your home, and that there are no problems between him and Velcro.

Love the rug in your bedroom! Happy 4th! Wish I was there - have had the live web-cam up for days, pining.

He may convince you that you need a dog in your life. Not one of my dogs has ever been afraid of fireworks. I wonder if some of the fear doesn't spread from the owner to the mascota.

Jennifer, I've never had a dog afraid of fireworks either. But I don't know about this dog.......

Thanks Barbara. I love the rug too. When will you be coming this way?

I'm glad too Bill. I was concerned and its interesting that THEY worked it out, not me!

Ah, dogs. The next change in our lives?

Both my cat and dog are outside animals. Tomas the cat only eats inside because other cats or the dog would eat his food.

Steve, a change in your life, for sure, but NOT mine. This is a very temporary thing.....although I must admit this is the sweetest, most well behaved dog I have
ever had the experience of being around.

Sparks, Velcro is as content outside as in, but does come in for her food because of the other roaming cats, squirrels, coatamundis and who knows what else, in the neighborhood!

I gave thought to acquiring a small dog as a companion. Then I offered to babysit two King Charles Cavaliers for a friend who was hospitalized. I do not have a fenced in yard so they could only go out on leash. They each pooped twice a day which I had to scoop up in
plastic baggies. After 3 weeks, I could have knit two sweaters with the shedding. It cured me. But they were cute. And barked like crazy if anyone came near me. Have fun.

Scout is adorable. What fun to have him around to cuddle, spoil and play with and know that he will go home and no longer be your responsibility. Sort of like having grandkids, lol.

Shannon, EXACTLY! My dog days are past...........love them, just don't want the responsibility any more.

Jvineyard - Yes, spaniels DO shed. I was warned. Now I realize I always had short haired dogs my whole life.......AND luckily, I have a huge yard so Scout can go outside anywhere in the big gardens for .........well, whatever.

I like dogs, but I don't want to have to own one. So having someone else's dog for a week sounds like fun. I hope you enjoy Scout's visit.

Kim G
Boston, MA
Where we find a cat much easier to maintain.

I imagine next spring will be the earliest I might be able to get back. Yet having said that - I am counting down to retirement - May 1st, 2016 is the first date I can look at it. Will I walk out the door that day? I don't know - but I am lining up immigration paperwork, appointments with DRS and Social Security, etc. Not long now!

Kim, I agree, cats are easier. I don't have a cat litter box so Velcro goes outside which is even better. I have enjoyed Scout's visit. Velcro hasn't though, ha.


Barbara - The anticipation of a change of lifestyle is always exciting. I'm glad I decided to move and was here in five months. Had it not been that way, I doubt that I would have gotten here.........I'm still amazed.

Wow! No litter box. Sadly, my cat (who spends the days outdoors) still uses her litterbox, and sometimes even comes in to use it, which kind of annoys me. But she's an older cat, so I don't really want to upset her by removing it. Still...I'm *quite* envious. Saludos.

Kim, when my daughter was a patient at MDAnderson. The doctors asked if she had a cat (she did) and a litter box. She had both. They said she needed to give away the cat and never have a litter box in the house. In fact, they said, that no one should have one in their house. I took them at their word and the only way I would have Velcro living here is without one. After nine years of cohabitating, she knows to stand by the door, or meow or walk across the back of the bed headboard to awaken me when she needs to go out..........It works for both of us!