On To Lighter Fare 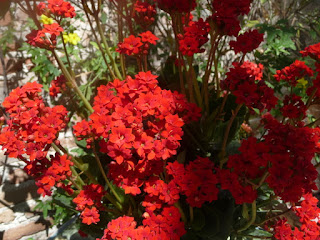 But, on to other things.  Monday, while driving down Mesones, (the street to the parking lot), I saw an elderly, old man who had an old wooden cane and who walked doubled over.  Truly he appeared to be 100 years old, at least.  He had huaraches on that were just about that old as well.

In my rear view mirror, I saw a cop on a motorcycle passing on my left side and then pulling in front of me.
I knew what was going to happen.

I've seen this before, here in San Miguel, and it ALWAYS chokes me up.  Always.  It was my gift for the day to see such a beautiful, genuine, thoughtful gesture in respect for the old man.  I so wish I had thought to get a photo of that beautiful scene. 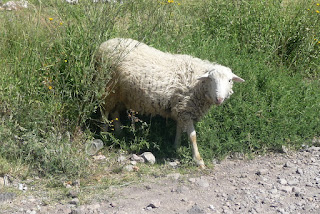 It's always something once I leave the house - and sometimes even if I am home and look out the windows.
But, this photo of the sheep was not outside my house.  Rather it was on the road as I left the Tuesday Tianguis yesterday.  I couldn't believe my eyes as I pulled out of the parking lot heading home.  But, as I drew closer, I slowed down and photographed the sheep who was having a field day with all the green stuff to munch on.

I think the sheep is from a small Mexican farm not too far from my house.  As I headed home, I tried to figure out how in the world, in my broken Spanish, I could explain to the farmers that I thought I saw their sheep.  I gave up and went on home hoping that one of the people in that neighborhood would figure out what I had figured out and let them know of the "sheep that got away".

Human kindness has no boundaries...

You could have walked the sheep across the street :-)

Ha, ha, ha Rick - good one! As I was taking a photo of the sheep, two young girls walked by and never gave the sheep a second look - however, they DID look at me curiously.........probably thinking "another gringa loca".......

One of my favourite Mexico stories is about the day that I was sitting in a plaza in Morelia, (big city) on the edge of a fountain waiting to meet Todd. That plaza is huge, two square blocks of concrete, not treed with grass as so many plazas are here. Anyway I saw a goat enter the plaza at the far corner and walk slowly and deliberately across the whole thing only to stop at the other side at the street light. Which was red. The goat waited, with about 30 people, who paid it no attention, and when the light changed it crossed the street and disappeared around the corner. The entire event was surreal. I wasn't sure if I was the only one who had seen the goat, if no one else thought it was strange, or if it was all in my mind. I'm pretty sure it wasn't all in my mind though, you just never know what you are going to see here.

Funny and amazing story Shannon! Thanks for sharing......