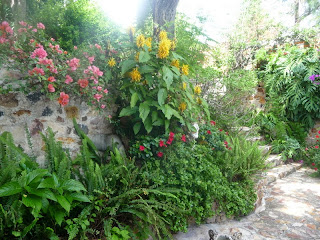 It obviously rained in May while I was in Texas!  I came home to an explosion of blooms and colors that I had not seen in a year.  This was what greeted me the first morning home..........what a lovely welcome home. 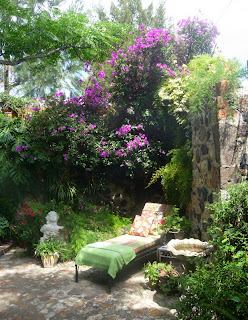 It has been quite a while, three weeks, almost, since I last posted.  Quite a long time for me to not write.

Life in the big city of Houston and Galveston Island is busy and at times hectic.  Add to that that I was borrowing other peoples computers while there and, well, you get the picture.

Arriving, the weather was awesome.  It quickly, within a week or so, disintegrated to torrential downpours and flooding.  My attempts to get out were stymied by the threat of flooding out the car - whatever car I was driving.  One only has to have had your car flooded out once in your life to be prepared to scurry home and wait out the storms rather then chance a catastrophe.  There were plenty in Texas while I was there.

It is so tranquil and quiet up here on the hill, that when I returned home, it was difficult to sleep the first night because of NO noise at all.  Only the sound of crickets outside.  Aaah, and I was able to sleep with the door open for the cool breeze (58F) to blow in.........amazing.

Something strange happened on this trip.  I've been reflecting about it for several days.  Even though I've lived here fourteen years, this was the first time that I thought of going "home".  In the past it has always been I'm returning to San Miguel.  It's a radical thought.  One that I need to reflect on some more.

There is always a certain sadness as I leave Texas.  I never accomplish seeing all the people I want to see, or doing all the things that I had wanted to do.  Some how, if and when I return, I need to rectify that.  Maybe plan ahead a big gathering somewhere of all my diverse friends in one place and then let all of them come to me.  Otherwise, it will not happen.


In addition, I need to figure out a way to have a car for the whole time I'm up there.  I hate to impose on people and  use their car even though they so graciously offer it.  The problem with renting is that the taxes in Houston on a rental car are near 20% when returning the car.  So, it is never an inexpensive proposition.

This trip I told everyone that from now on they need to come to San Miguel!  I think they thought I was kidding, but, in truth, if possible, I would love to share this beautiful place with anyone who wants to come to see me and it.

How's that for an invitation?  Come on down.
Posted by Babs at 9:06 AM

Your "home" comment is a phenomenon I had to deal with when I returned to Barra on Saturday. For the first time, in a long time, I feel as if I have found a place where I belong. It is an odd feeling, but I like it.

It's been twenty years that I moved here with owning my own apartment officially since 2002 ( I lived here renting with an option to buy since 1998 ) and I also consider this place to be " home ".
It's what I refer to when I speak of home.
I also have for years now said " we " when I speak of Mexico or the Mexican people. This happens not so much with cultural aspects but more in daily life and politics. I do not count myself as a visitor, because I live here full time, work here, pay taxes and contribute in other ways.
Still, it was no clear decision, but rather something that happened gradually until one day I realized that a certain place in the middle of Mexico City was my home and that I felt solidarity with and enjoyed being part of the Mexican people. I no longer remember if this recognition made me feel strange in any way, but I remember that I enjoyed ( and still do ) the fact that I feel less of an expat, a description I never enjoyed.
And before I forget:

Welcome back ! I have missed your posts.

Welcome home! We look forward to the experience in the winter months.

Just not December, January or February!!!
I moved from Montreal to Vancouver over forty years ago and I remember going to Montreal to visit my parents and going home to Vancouver. A shuttle shift in thinking and perspective had happened.
The garden looks lovely, and we did notice it has been ages since your last blog post.
Welcome home.

Steve, I need to go back and read all your posts for the last month as I didn't get to read or comment!

I'm so glad you were happy to get "home" as well.

Droelma, I always appreciate your comments. I've always felt a part of the community but kinda had one foot here and the other in Texas.
Never have felt like an expat but a citizen of San Miguel who is grateful, every day, (except cold ones) to be here.
Thanks for posting.

Peter and Shelagh - Interesting comments and, for sure, you have the place here in Dec/Jan/Feb......
I'm thrilled you're coming to enjoy San Miguel!

I agree with you. I also do not like the expression " expat " or being called this way. For me it is because there is a world of difference between different areas in Mexico when it comes to foreign residents.
For example I found the expat community here in the capital very different from the people who chose to live in SMA or for example Mazatlan or Ajijic.
Most expats I knew came here (D.F.) because of their work ( as did I ) and many came without being able to have a voice in the decision or arrived with a family in tow that wanted to be anywhere, but not in Mexico City . Luckily I had a choice and it is one I never regretted, even though I thought for quite a few years that I would retire in Asia and therefore stay in that part of the world until then.
Quite a few of the foreign residents had their luxurious homes paid by their employer and quickly enjoying the services of live-in maid and/or gardener as well as a driver, acting as if that was their accustomed standard of living, which normally it was not.
I also should say that maybe the best days of living this way are over, but the 90's were quite a change in lifestyle for " expats " posted here. There are still quite a few groups in the more up-scale neighborhoods, but I have no contact to any of them any more.
I neither felt really welcome ( being told several times when certain expats found out that I speak native level Spanish that I had " obviously gone native " ) nor comfortable.
My career in Humanitarian Aid working with the poorest of the poor is just not on the same level as International Investment, Insurance, Real Estate Developing, or other Industries.
In the last 15 years I thought I'd retire to Spain to be closer to my origins, but just in the last year I decided that I will stay in Mexico after my retirement, because here is truly where my life is. For the things I sometimes miss, there is always Amazon and FedEx....:o).

Barb, it's funny how when I go to SMA now (visiting), I feel like I am "home". I wonder how I will feel when I actually live there full time. By the way, we bought a house in Atascadero! We are going to sell our lot.

Cheryl, I'm THRILLED you've bought a home. You won't have all the angst that so many do that come here, go through that and then regret this or that.
I LOVE Atascadero with the big trees and established feel. GREAT decision.
It will be interesting to see how you feel after you're here full time. So looking forward to having you nearby!

Droelma, one of the things I find so enchanting about living here in SMA, is that for the most part every one who lives here or moved here did so because they wanted to live here, not because their job sent them here. People live here on $600 a month, under the radar, or for several thousand more. I also like that people don't ask what you did or do for a living. It's enough that you are just HERE. It is quite refreshing.

Glad that you made it home safely, and that the torrential rains were not a problem (other than forcing you to stay inside). I too missed your posts.

Your idea of having a big gathering of all your friends the next time you go to Houston is a good one. Every time that Alejandro comes up here for a visit, all my friends want to see him. We end up having a very hectic social schedule. This year (he's coming up in July) I decided to have an "open house", and everyone can come to my place to see him.

Thanks Bill! Great idea. If I come up, will you do that for me too? Just kidding, ha.

I don't have a house in Tx anymore but there are plenty of former clients who have restaurants that could handle a group.

I'm sure you're busy working in your gardens about now......share photos!

Yes, I worked 7 hours today in the garden. You'll have to catch up with my blog, since I have posted a few pics already.

"Even though I've lived here fourteen years, this was the first time that I thought of going "home". "

When I moved to Mexico ten years ago I immediately started calling it home - because it is. ;-)

And Calypso, I've always been glad to be here but thought it might be temporary. No more..........this is it!