Life Passed in the Flicker of an Eye

This past week was so busy it seems like it was over in a day!  The pace was schizophrenic.

First of all, a woman from Davis, California had flown in for a week to stay in the guest house to see if she wanted to live here full time.  For health reasons, it does not seem possible.  I did not know until this week that we, at 6400 ft elevation, are 1200 ft above Denver's elevation.  People with breathing problems have a really hard time here.  Many must leave later on in life when it becomes a major issue.

Then, in the throes of showing the house, with the woman's permission, I also worked
on the epic courtyard sale of the century.........well, maybe the year.  Hopefully my last, forever.

It was a sale in centro, near the jardin, with no parking.  That added to the intrigue of how to shlep  all my stuff down there, first of all.  Then setting up, selling and being there for a couple of days.  It was an adventure.

Here are some of the things you missed. 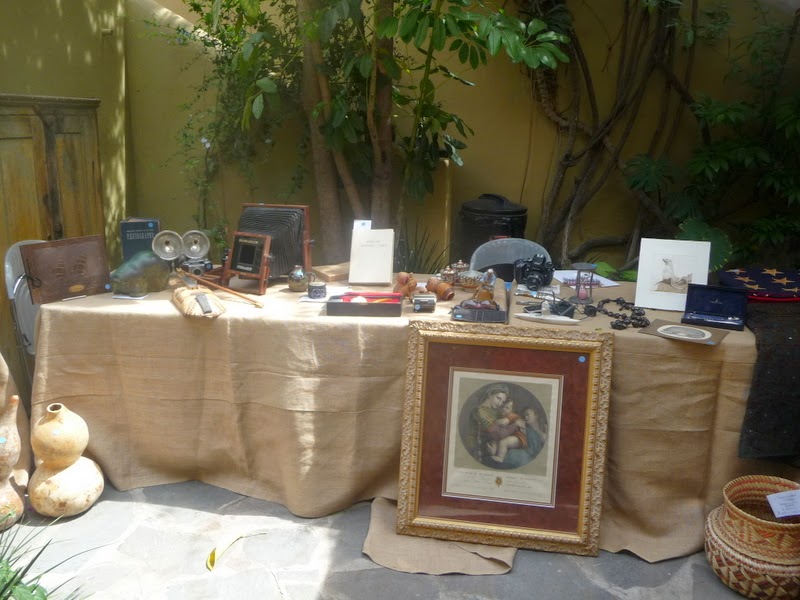 Gourds, camera items (a collection of 40 years) and Eskimo prints are gone.  But beautifully framed     artwork in front of table is still available. 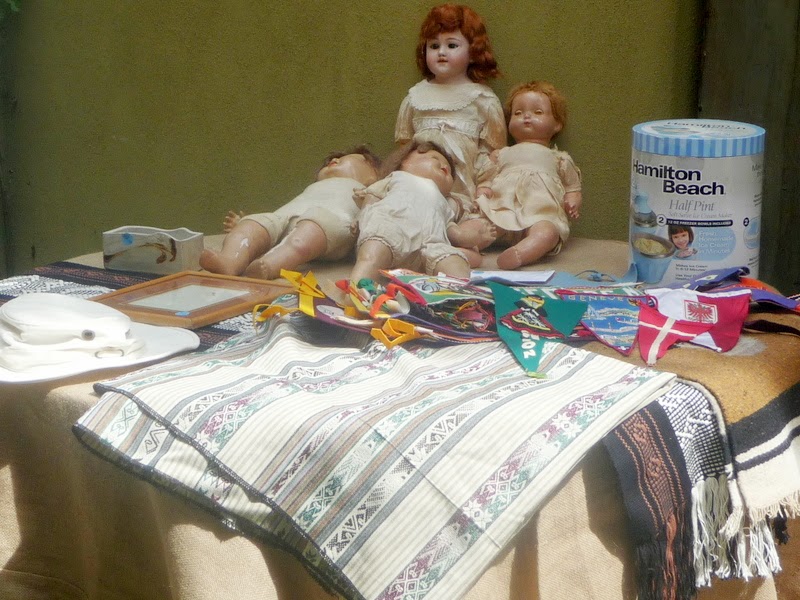 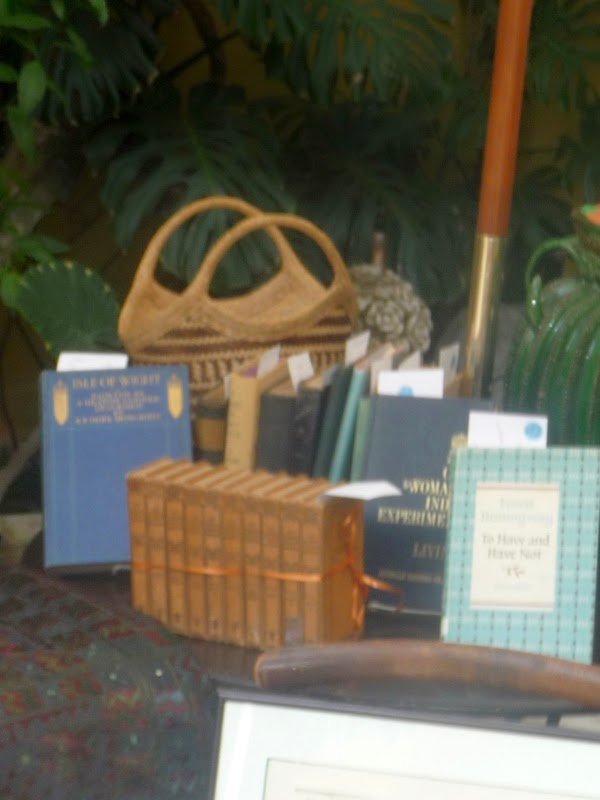 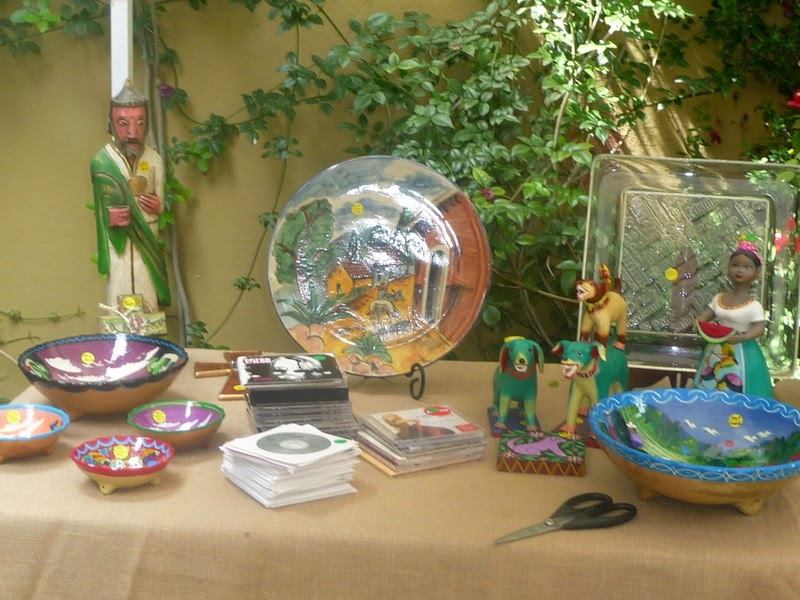 Everything on this table sold - except the scissors, ha. Nothing left on these two tables above or the table below.. 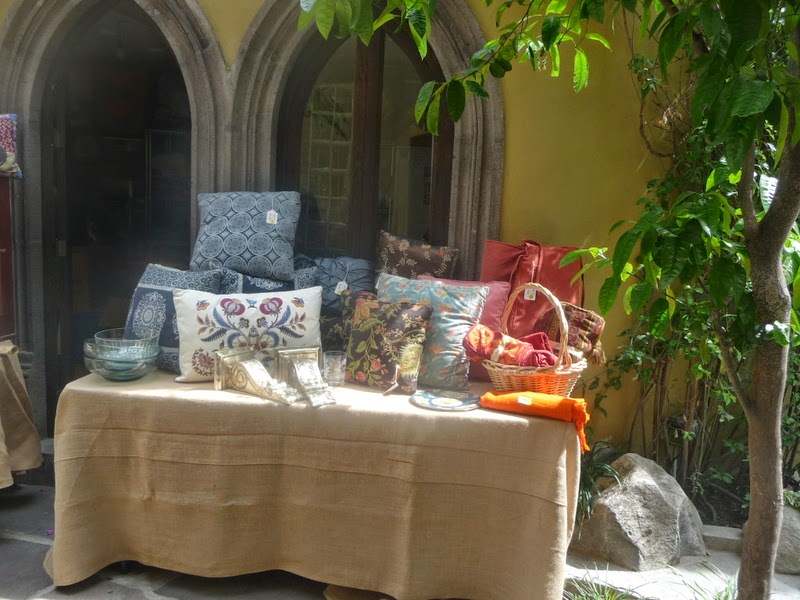 But, wait, not EVERYTHING sold, so if you see something that tickles your fancy, just ask, it might still be
available.

A couple of funny things happened during the two days.  One woman came up to my table where I had costume jewelry along with a few expensive things.  I had a bracelet for 50 pesos, $3.50USD.  She wanted to know if the emeralds and diamonds were real!  I was speechless and chuckled.  It never sold and it was good costume jewelry.

The other funny thing was when a woman came in with her chihuahua and schnauzer.  We had a man posted at the door to keep things running smoothly.  She handed him her leashes and proceeded to shop.  He was
startled a bit.

The sweetest thing that happened was two little girls came up to me where I had the stickers in all colors that we used for pricing items.  They wanted a sticker so I put them on the tips of their fingers and they walked around that way behind their parents.  They still had their fingers in the air as they left the sale with a smile on their faces.  Precious.

For me, I have a new respect for people who handle estate sales.  This whole thing took several weeks of planning, gathering items, marketing, pricing, displaying and selling.  I think I must be out of practice because I didn't used to think anything of having four or five sales a year.  I used to go to auctions in Houston and surrounding areas.  Then when I had a garage full of armoires or some such items, voila, a sale would ensue.
What fun, I thought at the time.  Not so much any more.

Hopefully when I go to the "great cloud in the sky", my kids will have fun having the last grand sale.  I'll chuckle as I dangle my toes over the edge of the cloud knowing I'm not down there shlepping stuff around!

I hope you still have that book on the symbolism of the Mexican saints. I would buy that from you in a heartbeat.

Steve, I do along with many others that you might find interesting. They are yours when we meet again!

Steve, for a price....these things ain't free. They're yours, but bring your checkbook, Boy....

So you never made the trip north of the border that you were talking about? We might have had a chance to get together, although it sounds like you were very busy with what we call a garage sale in Ohio.
Glad you were able to get rid of a lot of stuff. Things certainly do have a way of accumulating over the years!

Bill, I had hoped to leave this past week or this week, but, the guest house is still not leased and I need to accomplish that before I can leave.

Darn, I would so much have enjoyed seeing you and Francisco again.....

and is the Hemingway book still around?

Yes, Calypso as well as some other well known author first editions. If you want me to send a list, I'll be happy to do so....

So I'm very curious. Were most of your customers Mexicans or Expats?

I can't believe you sold all those candles. I go through candles at a terrific rate, at least when it's not hot. I'd have bought them all if I were there.

Kim G
Boston, MA
Where we regularly burn more than a dozen candles at once.

I'd say it was even - 50% Mexican nationals and 50% expats. It was great fun once we got it set up and going.........I regret that I didn't buy some of those candles. I don't burn as many anymore as I used to when I had candelabras.

Today, Kim (Gringo Suelto) told me that he had to go through a ridiculous amount of work to post a comment on my blog and prove that he is not a robot. (He had to go through a dozen pictures and pick out which ones were of cake or of meat.)
So, I'm just writing this comment to see if the same thing is happening on your blog.

No, all I had to do was copy the numbers from a picture of a house number... as I have been doing for a while on your blog. Originally I didn't even have to do that to post a comment, and no one had to do it on my blog either. I'm curious, do you have your comment settings set for "no word verification"? I do, yet several months ago, commenters had to start proving that "they are not a robot"... around the same time that I had to start doing the same to comment on your blog.

I haven't changed any settings or anything. Even when I comment on my blog, I have to prove I'm not a robot. What the heck!