Although I've been in the midst of writing about Chiapas, I decided today that I needed to write this post!

It won't be long now and the monarchs will be migrating north.  Often they come through San Miguel de Allende.  Why?  The lavender jacaranda trees, such as this one in my garden. 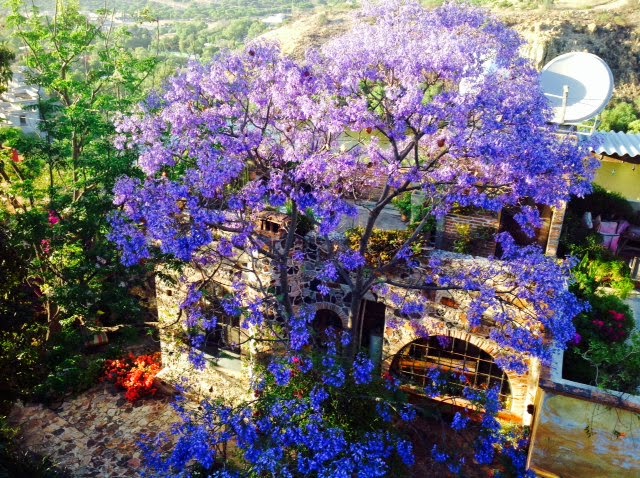 By next week, the whole town will be tinged in lavender from all the trees in bloom.  They provide nourishment for the monarchs.  I did not originally know that.

However, one beautiful, warm March day several years ago, while sitting on the roof terrace adjacent to the limbs of this tree, I saw a ribbon of something, probably five feet across coming from the south down my street!  To say I was intrigued as to what it was, would be an understatement.  In a few minutes the tree was covered with monarchs.  I was speechless and unable to move for fear they would leave.  Unfortunately I did not get a photograph.  It was breathtakingly beautiful.

Since that time I have watched for them.  I plant flowers that attract and nourish them, both in the fall when they are heading south and in the spring when they are heading north.  I also put small bowls of water in the garden.  They dip down to them continuously.  I got that idea from when I was in the monarch sanctuary Sierra Chinqua sitting next to a stream watching the hundreds of millions of butterflies.  They would leave the branches and dip down to the little stream and then go back to the branches.  Aha.

On Monday, a couple who read the blog, discovered my house and stopped in to visit.  They are from the town in Canada where one of the premier scientists who spent his whole life trying to find the monarchs lived.
His name, Frederick Urquhart.  His search and research began in 1937.  He met and married Norah.  Together they came up with a way to apply a tag on the wing of a monarch.  A tagging system was born.
Over the years they discovered that butterflies do travel...........in many instances, a long distance.

Enlisting volunteers, they tagged and studied monarchs until in 1975, a man in Mexico City showed some tattered monarchs to some Mexican loggers who showed him where there were  hundreds of millions of butterflies.

In 1976, after 39 years of research Frederick and Norah visited the thirteen sites covering five mountains northwest of Mexico City where, to this day, although in smaller numbers, the majority of monarchs migrate.

I have traveled to Sierra Chinqua which is a magnificent 2 1/2 hour drive from San Miguel de Allende.  To say it is a life altering experience would be an understatement.  Here are some photos: 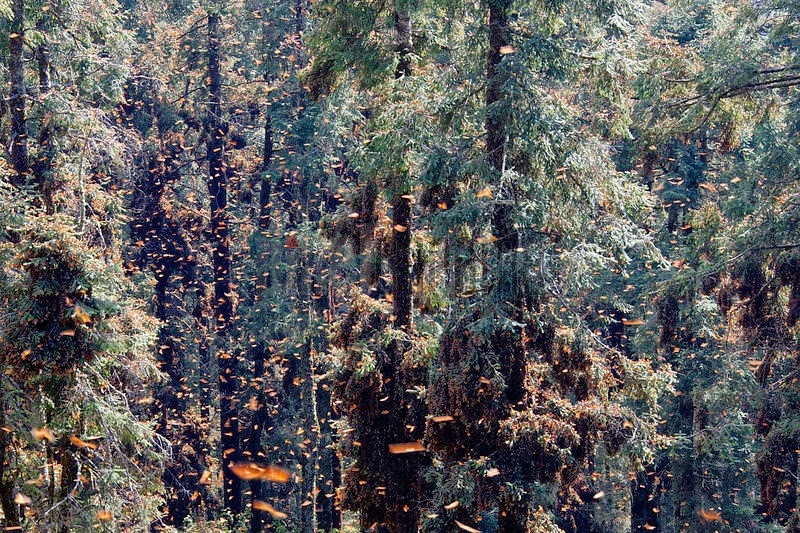 All of these posted photos were on a website about Sierra Chinqua.  I didn't dig mine out, but they are very similar.  You just HAVE to go there.  No photos can give to you the sound of their wings, or the crunch of the dead ones wings as you walk on them.  It is as though you have entered another world of existence.

If I were to write a post about the places in Mexico that I have traveled that have changed my perception of life, this would be at the top.  It was so emotional and I was so honored to experience this beautiful phenomena that for days afterwards I could think of nothing else.

Somewhere I have more photos of the families of those who take care of the areas of the sanctuaries that I met. I'll find them and share.  It was truly life altering.

At this time of the year, and others, as other butterflies head north, it is not unusual as you cross over the mountains in your car to see ribbons of color traveling beside you.

Ironically, butterflies were part of my and my family's life long before I came to Mexico!  My daughter Jennifer, while recovering from leukemia, began to raise monarchs.  She even had calling cards made that said "Butterfly gardener".  On the fifth anniversary of her passing, many friends, in her honor planted milkweed, butterfly bushes and other plants that attract monarchs.  It's a living testament to Jennifer and her dedication to  the tenancity of the monarch's attempt at survival.

Thanks to Bev and Lynn for stopping by and telling me the story of this dedicated scientist and his wife who were the beginning of the search for the monarch's hibernation sanctuary.

To read much much more about all of the above, please go to Urquhart Butterfly Garden and Sierra Chinqua Butterfly Sanctuary among many, many others.  It is fascinating.

If you get the opportunity to visit any of the monarch sanctuaries, GO.......you will not regret it.  NOW is the time.

This summer when I see some monarchs at my butterfly bush, I will be wondering if they had earlier stopped at your place for a feast on your jacaranda tree!

Ahh Bill, well if not actually one that stopped here, but possibly a descendent? A great thought!

Thanks so much for posting about the monarchs! I too have monarch fever and have visited the reserves and also tagged monarchs for release. Visitng the sanctuary was an amazing experience. Preserving forest habitat in Mexico and plant habitat from there up to Canada are both crucial for their survival. Interested readers might want to visit the two following site- Journey North: https://www.learner.org/jnorth/ which allows you to track the actual migration of monarch and other species in real time. And Monarch Watch to learn about the amazing works scientests and citizen-scientests are doing to preserve the species: http://www.monarchwatch.org/

I'm looking forward to seeing monarchs on the jacarandas when i arrive in a few weeks- thanks for the image!

Thanks Laurie for posting that information! Come and enjoy....in San Miguel!

Oh,this makes me want to return to San Miguel even more! As a photographer, and retired educator, I've often dreamed of taking photos during the Monarch migration.

Dorothy - No time like the present! I have a phenomenal guide if you decide
to do so. He is extremely knowledgeable and is well known by the residents of
the sanctuary that I wrote about...Let me know if you're heading this way.