In San Miguel de Allende, Mexico, the town referred to as the place with "eternal spring", often, that is not quite true.

To me, the chilliness begins in October with one or two dips toward the 30's at night but warm during the day.  Then November the same might happen.  We ALL know that December and January can be nippy to
put it mildly.

Many of us leave and head for the beach the month of January to save us from cold hands and frost tipped noses.  Temps can dip down to 26, 27 or 30 at night.  That's okay if it is sunny the following day to warm up
the stone walled houses.  If not, it is multi-layered clothing until the next day when the sun usually is out.

I try to leave as often as I can in January.  This year that didn't happen.  I contented myself with the pipe dream that it would turn warm on February 1, as it has sometimes in the past.

More often however, the weather the first week or so of February can be dicey.  Candelaria happens and the vendors sleep under their tables at night!  I've often, over the years, felt so sorry for them when the inevitable rain comes for a night or two.

Back in 2010, I documented the rain of all rains for five straight days the first part of February.  I wrote about it in a blog on February 5, 2010.  Here are the photos. 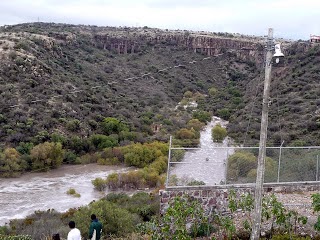 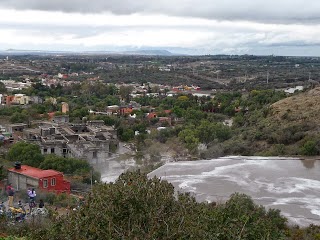 Now we haven't had that much rain since last Thursday when our cloudy skies and off and on rain began, but it was kinda miserable.  Not feeling well on Thursday or Friday, I finally succumbed to closing the drapes and ignoring the world.  It worked.  Finally on Sunday a tad of sun appeared.

That photo of the abandoned hotel in the second photo was a project begun in 1982 by Club Med to have a facility in San Miguel for people to visit archaeological sites in this part of Mexico!  Quite forward thinking, as the Pyramid at Canada did not even begin to be explored until the early to mid 2000's.  There are several other pyramids to explore over near Irapuato and north of here now that are open to the public.

Club Med stopped construction in 1983 and now our very own ruin sits there disintegrating bit by bit, year after year as the water flows through in our not very frequent floods.

This second photograph was so amazing that people from all over town came to stand on the cliff in awe and amazement.  I too was awed and amazed.

Most of us who have lived here for a long time know not to even think to attempt to have an outdoor event in February because of this schizophrenic weather.  Some years its perfect, but when it isn't, it REALLY isn't!

Sadly that is what happened last week at the Writer's Conference where at least 75% of the activities were in tents on the grounds or on the grounds themselves.  It certainly dampened the spirits, I'm sure (pardon the pun).

Today as I write this, I turn and look out the window at not azure blue skies, but no clouds, thankfully.   We all hope the weird weather is over and the warmth is returning.

Wow, I never realized that San Miguel could get that much rain in the "dry season". During my five weeks in Oaxaca and D.F I had no rain at all. There were a couple days that were mostly cloudy, but generally it was sunshine every day.
Hope you're feeling better, and that the sun is shining!

Did you get to hear Scott Turow?

Hi Bill - I am better and YES, the sun is shining. I checked the temp while I was out and it said 81F! Yee ha.

Steve, no I did not get to hear Scott Turow. When I realized I wasn't going to get to go, I gave my ticket to someone. Haven't heard anything about his talk. I heard they are going to have all the talks available for purchase, but don't know how, where or how much. If I do find out, I'll let you know.

Thanks Hannibal, I'll remember that.

If it makes things better, we love San Miguel in the cold and rain. Nothing better than walking the market in the cold and the wonderful smells you encounter. Parked up at the botanical gardens, a wonderful place to take a nap in the rv.

Well, if you're parked near the Botanical gardens, then you are within yelling distance of mi casa.
IF you have a good heater in the RV that makes all the difference from the stone houses! Truly.......

Absolutely, it's all relative!

Hi Babs, You can get downloads of the speakers from the writers' conference through the Literary Sala's website. They should be available soon. All the speakers were really great, including Scott Turow. By the way, the rain and cold did NOT put a damper on the writers' conference. It actually brought people closer together and everyone was even more friendly. Everyone was dancing in the rain at the fiesta and salsa dance party! Love it.

Thanks Rebecca for the info. I would like to hear the talks for sure. And I'm glad that the rain didn't put a damper on the festivities! Thanks for your comment.