If you don't get out of town, you forget!

Making the drive to Celaya yesterday, about 45 minutes and about 1500 ft lower then San Miguel, I was
reminded that I live in an agricultural   area.  A beautiful one.

If you don't get out of town, you forget.  You forget about the oxen being used, still, in the fields.  Or the man and his dog using their horse to pull a wooden cart.  People picking crops of jicama in the fields. 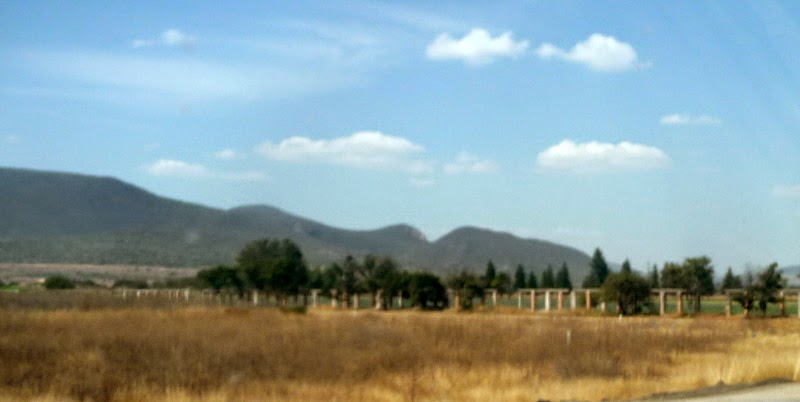 The old aqueduct has now been refitted with piping that runs along the top of it for irrigating the crops.

This photo was taken heading back to San Miguel just after the exit to Comonfort.  All the different shades of green with different crops is so pleasing to the eye.  Isn't it? 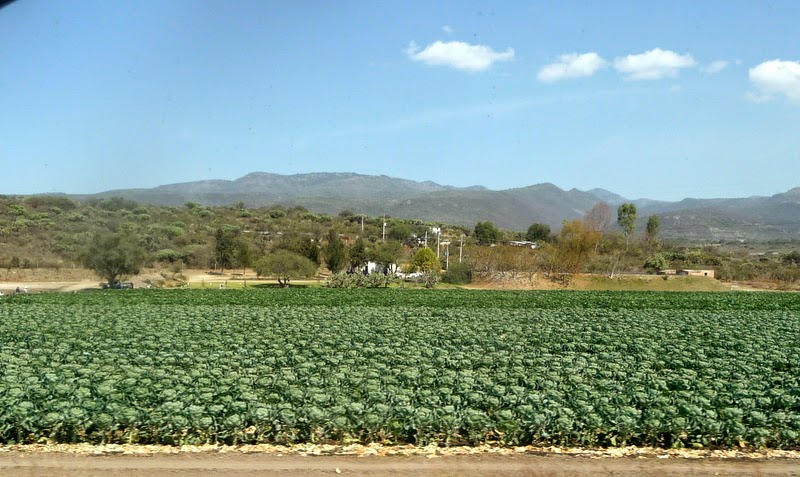 Another view of another field with another crop.  Probably cauliflower or broccoli or cabbage.  I don't know which.

These photos are always taken as I'm driving.  Since I'm driving alone and seldom have someone else driving there are so many things, because of traffic, that I don't get to photograph.

There is a shrine to St. Jude Tadeo at an intersection that always has traffic.  So, I never get a chance, unless of course, I pulled over and parked.  There is always something going on at this shrine.  Yesterday, it was a
young teenager kneeling in front of the shrine praying.  Quite moving.

Except for the irrigated crops that are green, the mountains and countryside is dusty and brown.  Our rainy season ended in September.  I was thinking as I was driving about what a surprise it is after a couple of weeks of the rainy season to see how everything returns to life.  Things you would never imagine would return, do and bloom and grow.  Quite unbelievable.

There were stands along the roads in both directions selling jicama, watermelons, honeydew melons and assorted items.  This obviously is the season to harvest the jicama.  There were bushels and bushels and more bushels yesterday.  Jicama is served as a botana with chili pepper prior to a meal in many restaurants in San Miguel.  To me, without some kind of sauce or pepper or something, it is a tasteless root vegetable.
Obviously it is loved by many or there would not be so many fields of it being  used  both in Mexico and exported to the USA.

As I realized yesterday, there is ALWAYS something to see on the roads of Mexico.  Always.

As I reentered San Miguel and was at a stop sign, I was able to get a photo of a vertical garden that has been added on the front of the Pollo Feliz restaurant.  It is fascinating.  Next time I go by, I'm going to stop and see what is anchoring that on the wall.  Who knows I might end up with a vertical garden somewhere here.  Life is full of surprises and delights, isn't it? 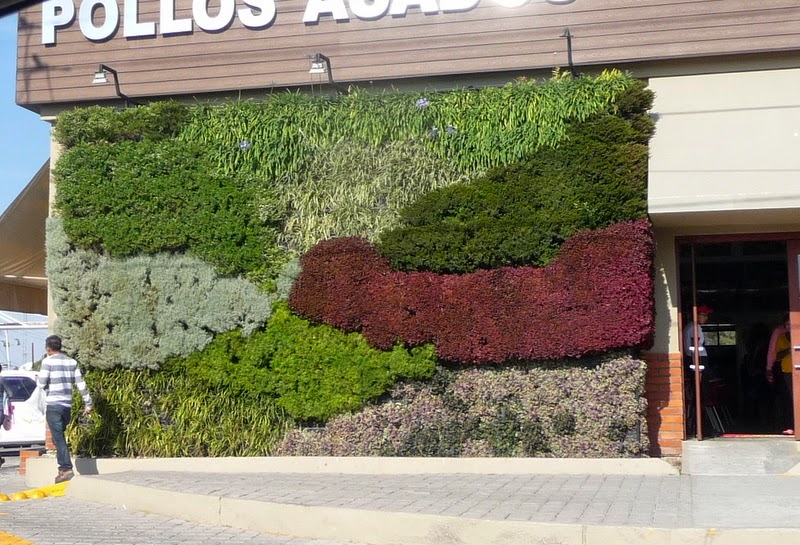 Yes, you don't have to go far out of town to experience rural Mexico. As we were going down a dusty street of a village in Oaxaca, coming in the other direction was a goatherd with his flock.

I've seen a number of those vertical gardens on restaurants and homes in Mexico City. It's quite interesting.

Bill, I've heard that there are lots of rooftop gardens in Mx. In fact, one article said that DF was the first major city in the 1600's to have roof gardens! I'm intrigued by the vertical plantings. I want to know, more then anything, how do you keep them alive without having to mist them daily. If they are labor intensive, I'm not interested.....ha

That planted wall is exquisite!!!

I thought so too Rick. I want to examine it up closer to see the construction and the plant material.

Vertical gardens are becoming quite popular in our home town of Vancouver BC. Many commercial buildings and shopping malls have them now. Most are planted with succulents and grasses and are trimmed twice yearly. They are beautiful and add a soft natural element to an otherwise harsh concrete wall.
I'm sure you'll be able to find a "how to" video on youtube...

GREAT idea Peter. I never think to utilize You Tube. Will do! Thanks. They make so much sense. I have a couple of places in the garden where the walls aren't plastered.....especially a wall on the roof. I might start there and see what happens. I sure have plenty of succulents and grasses!
Thanks.