THE Story of the Day 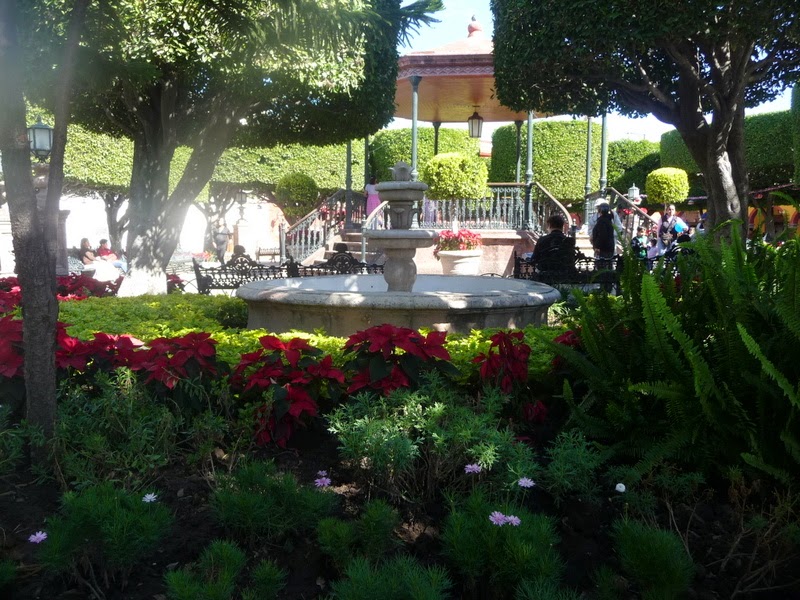 The jardin looked spectacularly colorful and lush yesterday.  This photo was taken while I was sitting on the bench and turned around to snap it.  I had not been into the jardin in several weeks.  Not since they had planted all the poinsettias or put up the Christmas decorations.  Time flies. 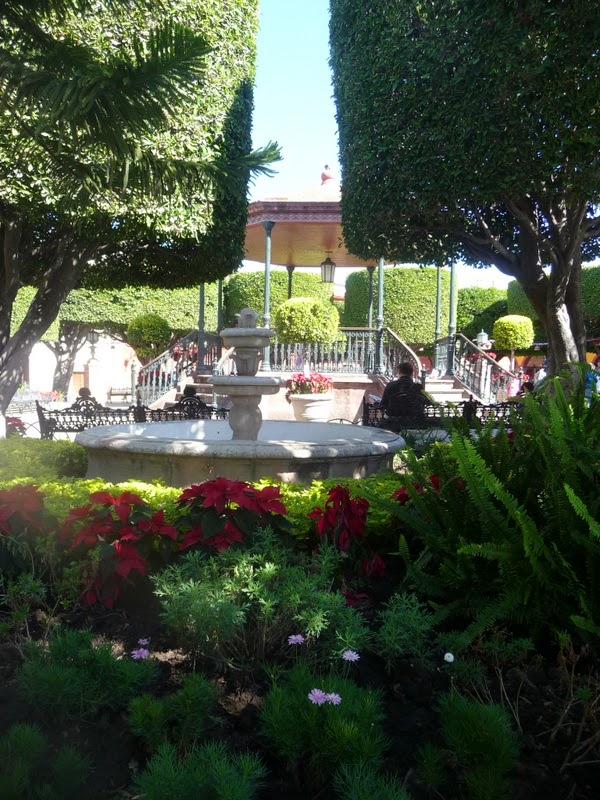 Soon where the kiosk is located will be the Nativity scene with live animals.  It's always so delightful to see.

Heading down to have "bench time" yesterday was delightful.  Friends walked by and stopped to talk.  My son walked by on his way to brunch..........on his birthday!  I met him later for a bit of time. 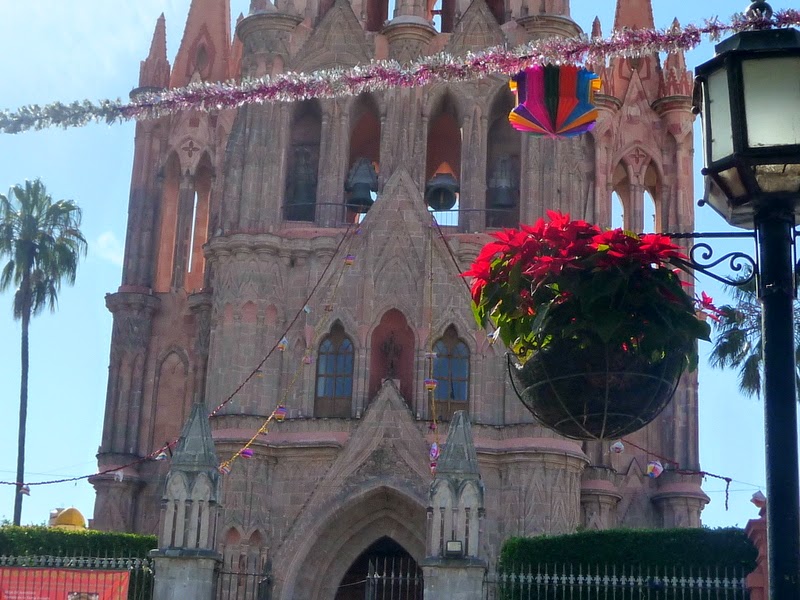 The Christmas decorations are relatively simple with poinsettias, paper lanterns and some tinsely rope tied between the light fixtures. 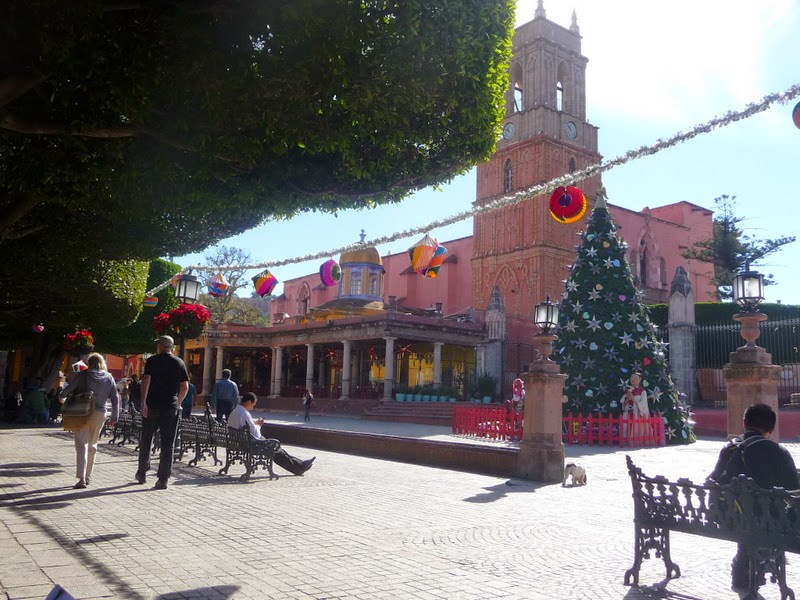 In about 2003, the city started putting up a tree in the jardin.  Prior to that it was unusual to see Christmas trees anywhere.  Certainly at that time, there still were not fresh trees to buy for one's home.  Today there are. Pathways and streets have visitors, but not like it will be starting next week.  It will be full.  These photos were taken about 11AM.  As the day wears on, the people become more plentiful. 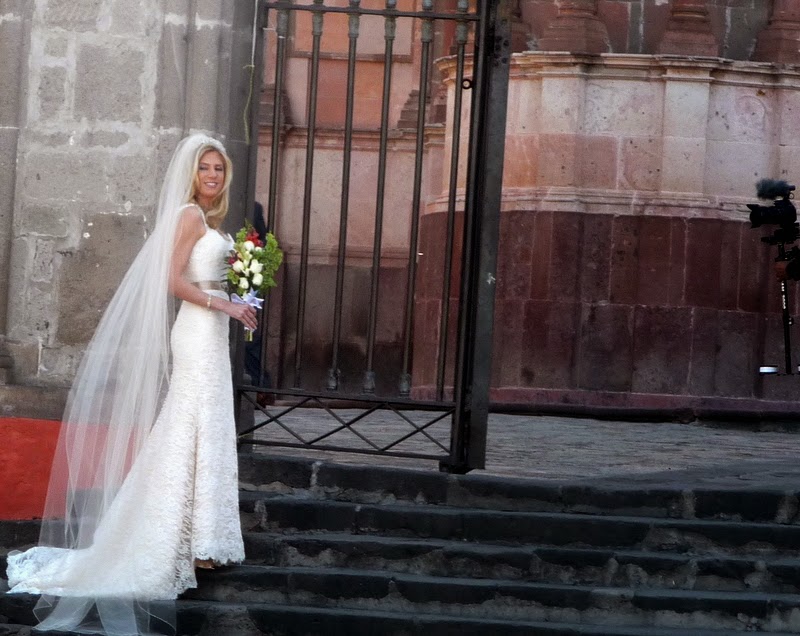 As we sat talking, a wedding party arrived with a beautiful bride, about to be married in the magnificent Parroquia.  A little unusual on a Friday.  Most of the weddings are back to back in all the churches on the weekends.  San Miguel is quite a destination wedding city now. 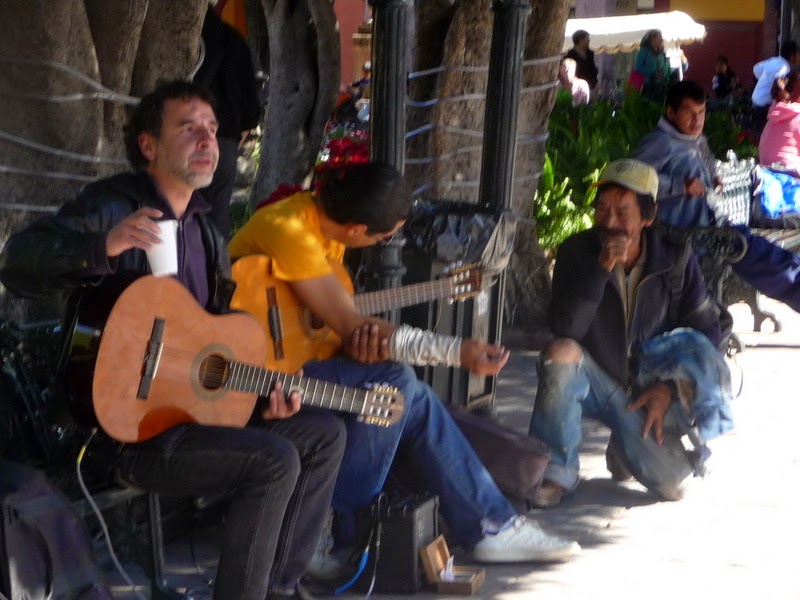 I have saved the best for last.  While we were sitting and talking, beautiful, soft, melodic guitar music was playing on a bench just down from us.  Absolutely lovely.

Initially, the man with the hole in his jeans was walking by, heard the music and I saw his fingers playing the song as he stood and watched them.  He moved on.  But, he came back.  He went over and dropped coins in their little tip box, listened for a bit and left.  He came back again about five minutes later.  He bent down and just listened.  Very intently and watched the guitarist playing.  He was so in the moment.

I would so like to have known his story.  At some point in his life he has or still does play music.  I got that feeling from watching his fingers playing along with the musicians.

His clothes are tattered.  He wasn't particularly clean.  He looked, at first, like a street person.  But his spirit was in the music.  The sparkle that came to his eyes when that music began said it all.

This man was a message of generosity and someone "living in the moment".  He made my day!  And, the musicians made his, obviously.

It is these small moments that make me appreciate what Mexico offers.

I perform these guitar concerts daily in my living room - come on down ;-)

Yes, meaningful moments seem to be easier in Mexico, I presume because of the pace of life, Steve.

I'm never in the jardin that there isn't something that is a memory.

Thank you Barbara. It's like being there with you.

Rick, it would be so lovely to have you here to enjoy it all. This is the type of "quiet" Christmas that I remember as a child.