Architecture and design have always been my passion.  When moving into this property, the arches, the stone walls and the architecturally unscathed cantera stairs delighted my senses.

Resisting for fourteen years to have handrails, banisters, or anything to detract from the stairs WAS my goal.

Then a couple of months ago after falling really hard, something connected.  It was an unexpected, quick and severe fall.  Maybe it knocked some sense into my head!

Shortly thereafter, I began to think about what if that had happened at the top of the stairs and I had fallen over the edge and fallen three stories down.  I truly had never been concerned before this. 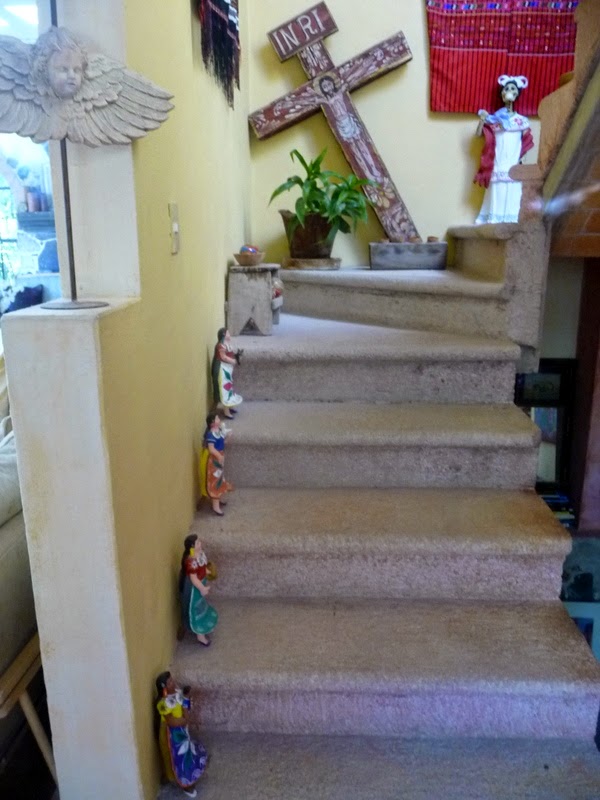 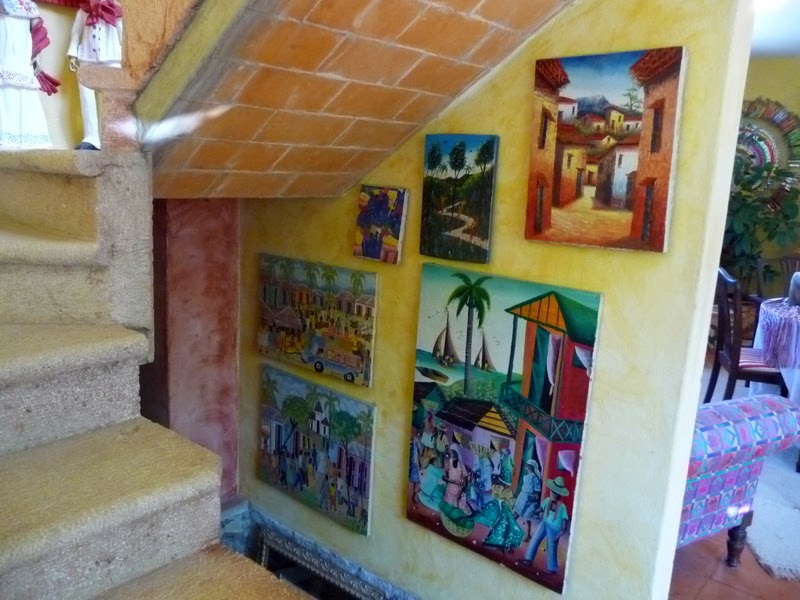 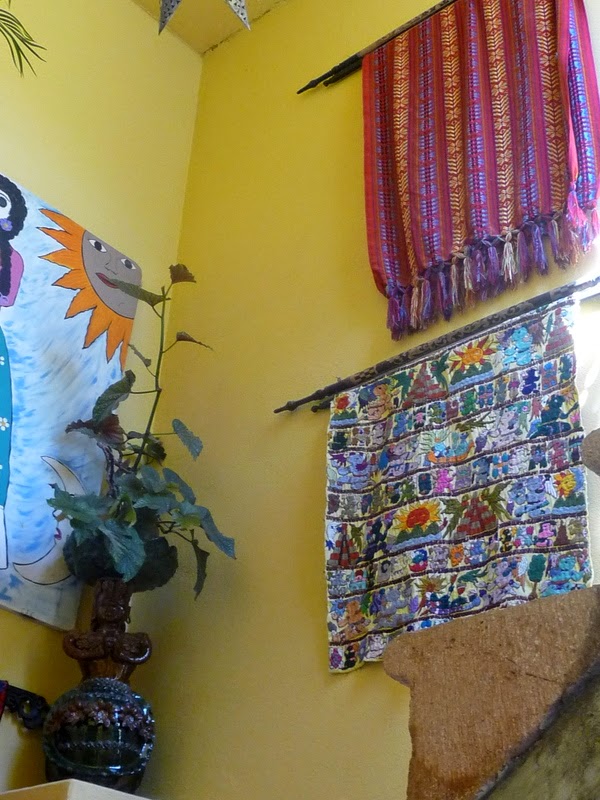 As one enters from the roof terrace there is a really deep step. My concern had always been for others because I knew how to hold onto the open door and frame,  But, would they?  It was disconcerting to others.  They expressed concern about me.  I pooh poohed it, always.

Then with this fall, for some reason, I became tentative as I came off the roof terrace.  Sheesh, what a wimp.  But then I thought, you could be a DEAD wimp!  Or worse, an injured, severely wimp........

So, finally I said something, after fourteen years to the owners when they came to put in the new water tank.
Last week they put in handrails from the first floor to the ground floor where my bedroom, dressing area and bathroom are located.  Hmmmm, I realized that holding that handrail going up helped my "still sore" injured knee.

Today, they came to install the banisters and handrails.  By this time I didn't even care if they were pretty.  Once I realized the danger, I just wanted something, anything, any color and sturdy.

Voila!  That's exactly what I got.  It ain't pretty.  It ain't a pretty design.  It ain't even colorful. 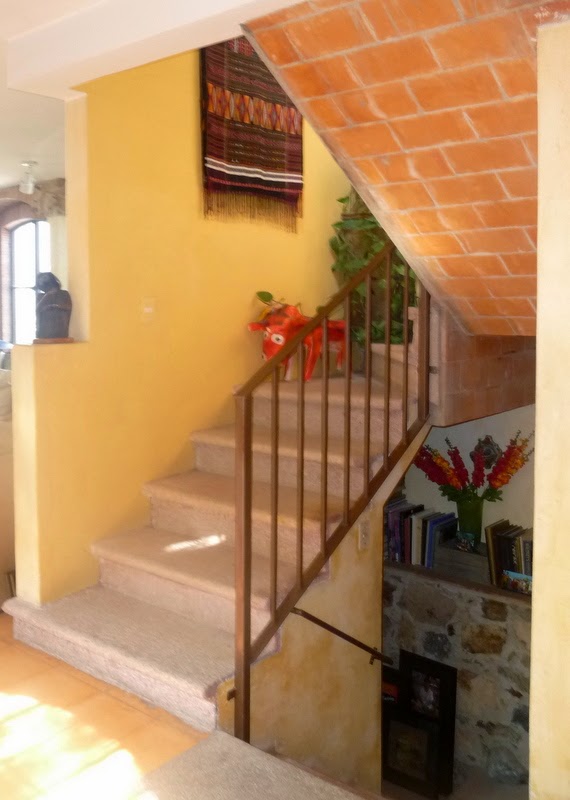 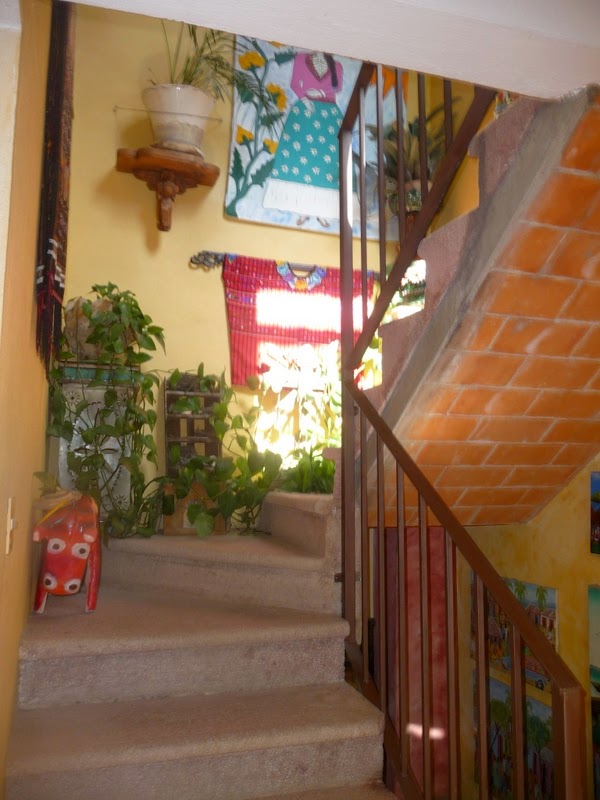 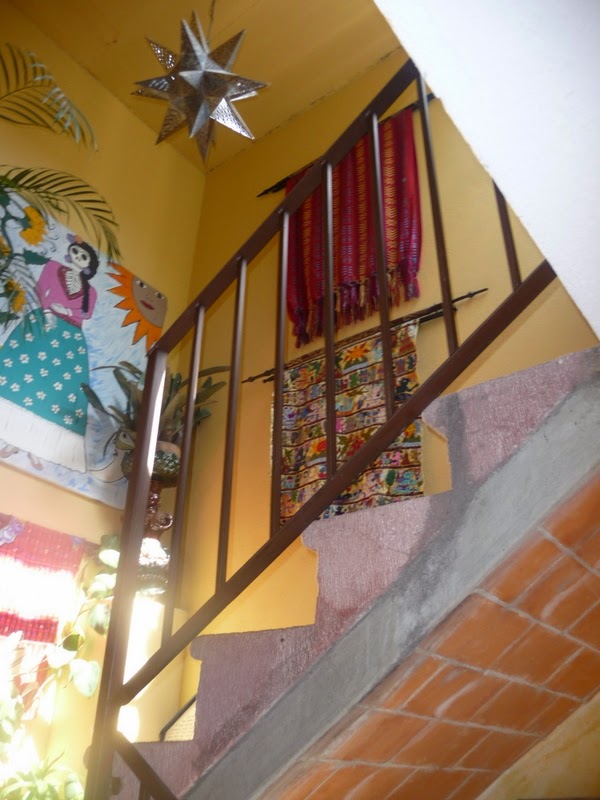 BUT it sure as heck is sturdy!

It was fascinating to watch them bring in the two pieces, measure again, reweld, secure, and touch up paint .

One of the funniest things was when I heard the vacuum going.  I knew that the landlord, Carlos, knew I had a vacuum in the bodega.  I quickly grabbed my camera to get a photo of him vacuuming up the concrete dust from installing the railings. 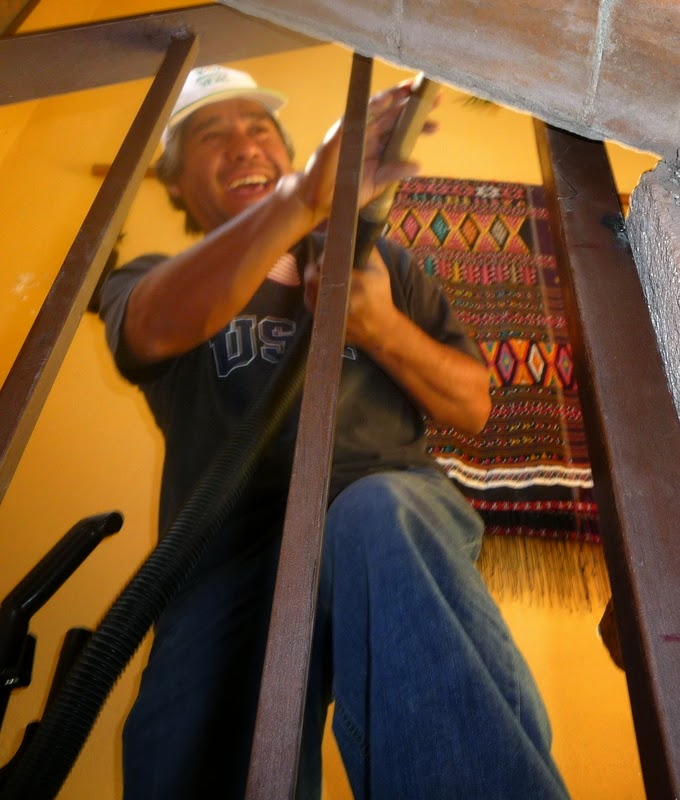 I came rolling around the corner of the stairs, snapped the photo and told him I was sending it to his wife, Maria.  Love the smile on his face!  A Mexican man vacuuming.  NOW I've seen everything.  AND, he knew it!

NOW I'll really be able to zip up and down the stairs. No more snail's pace for me.  Well, maybe until the knee is completely healed.  It's been eight weeks........and counting.

I think the beach will heal all wounds, soon.

Trust me, an ounce of prevention can be worth a TON of cure!

Todd, no one knows better then you and Shannon! WHEN the heck are we going to get together? It's been ages........

Hugs to you both.

Sometimes safety trumps aesthetics. Although, at least from the photos, the railings look very nice!

Nice and functional and safe, Bill. I thought originally of adding flourishes, but truly, I just wanted it up for safety. It was strange how much I wanted it once I decided I did.
It will do.........AND now I don't have to worry about dying with a broken neck, ha.

I would style it as minimalist with maximum effect.

And the best part is that they look really good. Luckily we designed our house to be one story, I figured that at some point I was not going to be able to do the stairs etc, not yet thankfully!

So glad you did this!

Ha, Steve there has never been anything or anytime in my life that anything has been minimalist....at least not in my house! But thanks for the compliment......

Tancho, somehow the stairs do limber me up. For how many more years is anybody's guess.......

Me too Billie. Me too.

Could put a wood cap on the hand rail .... but maybe not necessary

You will enjoy that handrail. Might have added 10 years to your life.

Sparks, the landlord did it....didn't cost me anything, so I'm not going to ask for any more....it is definitely sturdy!

Rick, indeed, for sure!

Unknown said...
This comment has been removed by the author.
9:05 PM

Pretty soon they'll just blend in with the background. No more worries about you, your guests or your grandkids taking the plunge!

You are so RIGHT Janet.......and I have 20 people, the koffee klatch group, coming for comida next Friday......just in time!

Many interior Mexican stairs lack handrails, something I've found kind of weird in a country that's known for its borracheras among other things.

I'm glad you got handrails. A tumble at any age can be bad news, but as we get older, the healing up process gets slower and more complicated. You made the right decision.

And you must have the best landlord in all of Mexico. I was reading this thinking you'd have had them installed yourself, but no. He put them in and it sounds like without much delay. Kudos!

Kim G
Boston, MA
Where we have a banister up to the landing and then no rails beyond that. Probably should put them in some day.

Hi Kim - I tried to look up the word borracheras in both of my spanish dictionaries...not there, so please explain.
I'm thrilled with the railings. It has made a difference that I had not even anticipated.
My landlord didn't want to have to pay full price for the railings plus the fact that in 14 years they have done 4 things......I think that has to do with some of it....whatever, I'm happy to have it done. The bid I had gotten was $175USD.....I have no idea what it would cost in the USA.

A borrachera is a drunken binge, at least as I understand it. However according to wordreference (http://www.wordreference.com/es/en/translation.asp?spen=borrachera), it's merely drunkenness. But I think in Mexican Spanish, it has more the sense of a "bender."

In any case, you'd hate to be young, fit, and athletic, but in a drunken state on some tall, rail-less stair. At least in my book.

Kim G
Boston, MA
Where we are astonished at how little your new stair railings cost.

Thanks Kim for giving me that information! Well, its been so long since I've been drunk or even tipsy. Sad but true!

When I go to the beach, I do have a few drinks but never more then two. I know its my limit. And the bungalow is on the second floor with steep stairs and handrails. Ha.