Sometimes life gets too hectic to find time to write the blog.  I hate when that happens, but this past week is a prime example.

A lovely couple from Ohio was in the guest house!  How fun to observe them enjoying San Miguel for the first time and their comment that "We will be back" as they left.........

Getting ready for the BIG (for me) Koffee Klatch Christmas Gathering at my house.  It was a pot luck so it seemed it would be a piece of cake.  I had forgotten all the little details of having a group over.  It has been quite a few years.

The last time I did something like this I had fifty-five for dinner out in the gardens for a sit down meal.  That was quite an event.  It has not happened again........

This was pure joy!  Last night and this morning I've reflected about how grateful one should be - and I am - to have such a zany, wacky, fun group of friends to share life with.

As always, even the best plans of mice and men, never happen the anticipated way.  I had worried, needlessly, as to where everyone would be able to sit to eat the feast that everyone was bringing.  I had played it out in my head a dozen times.  The guest house table could seat six.  The dining room table in my house could seat eight.  AND, the roof terrace glass top table could accommodate six easily.  Perfect!

Thursday was one of the coldest days it seemed to me.  In fact I got so chilled at one point that I came home and crawled under the covers to warm up for about thirty minutes.  So, scratch the roof top terrace table.

Then yesterday, I awoke to a relatively warmer day.  One that one could walk outside without saying ""mucho frio"...........

Still I didn't plan on the rooftop terrace table.  How would this work out, I wondered.

Here's what happened in photos: 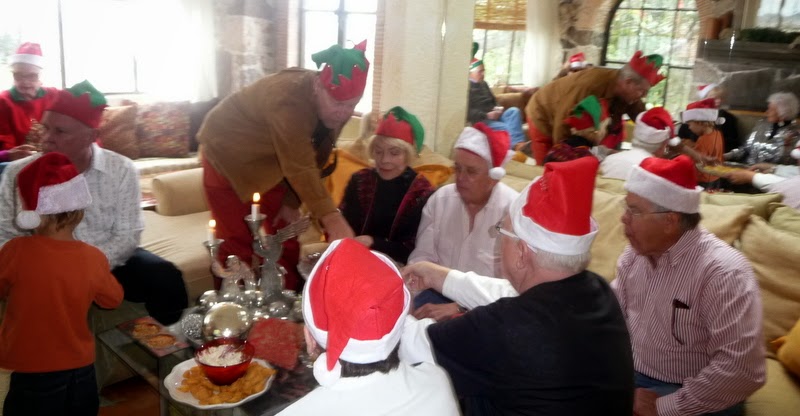 Just put out appetizers and positions are determined.  Near the food.  I failed to take a photo of the line of food. At that point it was too hectic. Here is some of what was served.  Baked Ham, Fabulous pork tenderloin, au gratin potatoes, baked sweet potatoes, creamed corn, green beans, salads galore, hot breads and rolls, just to name some of it.  Dessert was lemon bars, German chocolate cake and an exceptional carrot cake as well.

At this point I thought people would sit at the dining room table, NOT.  Some did go to the guest house to that table, but most stayed in the living room.  About eleven of us.  It was interesting.

Dessert was served in the living room as well.  No one was leaving.  Good food and then the zany Santa gift swap.  Dogie, of course, gave us the rules.  But, rules are only to be broken and our group is good at that, ha.  Here are some of the fun photos. 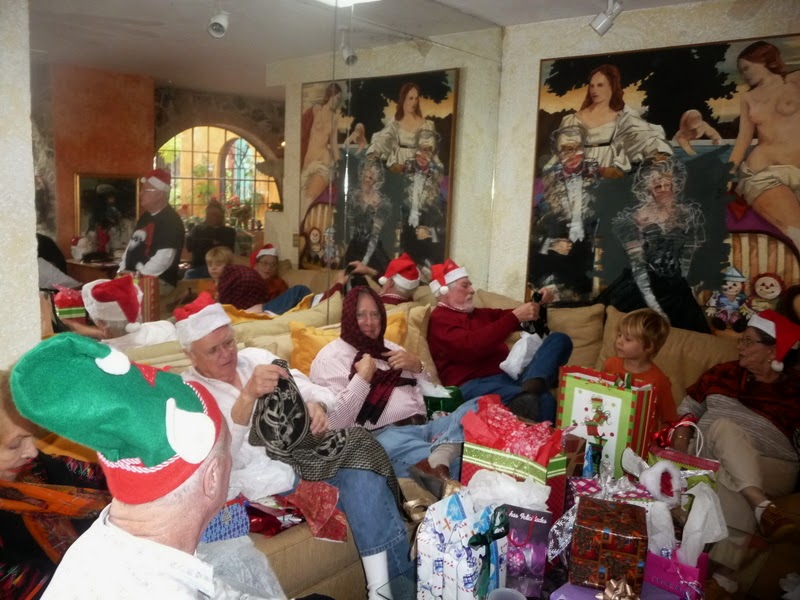 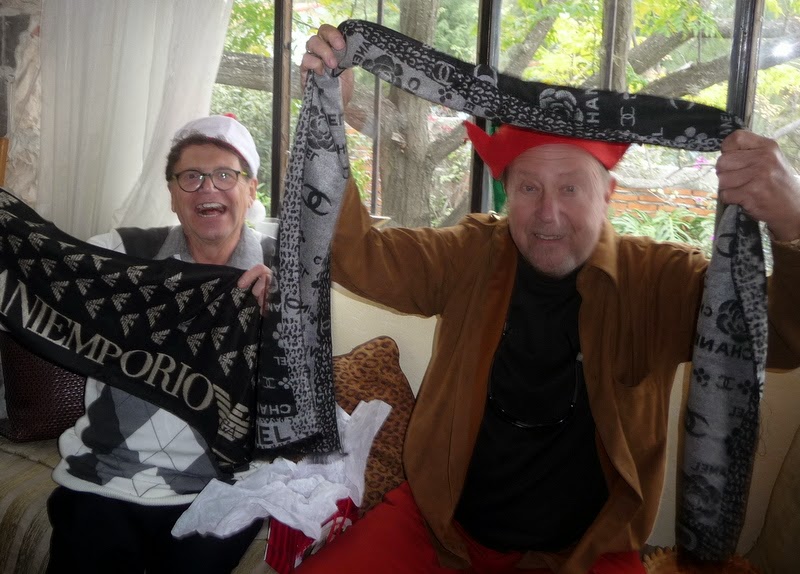 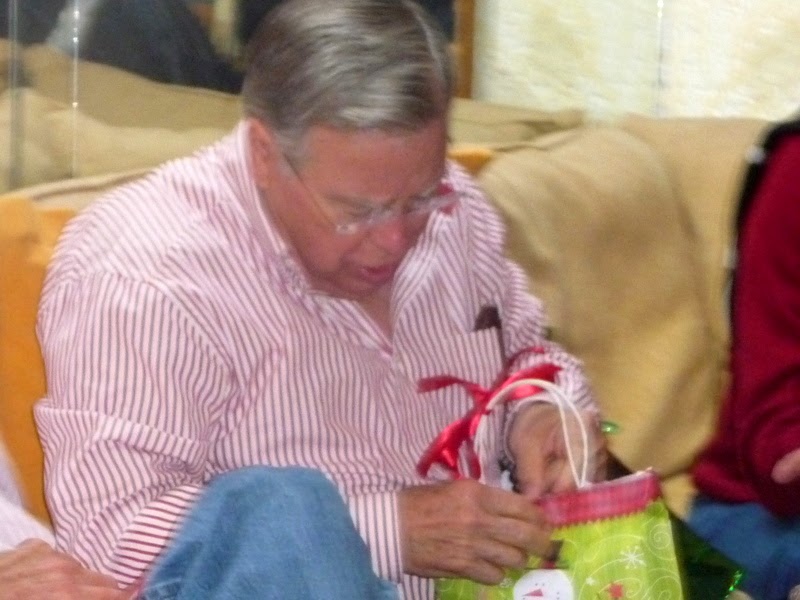 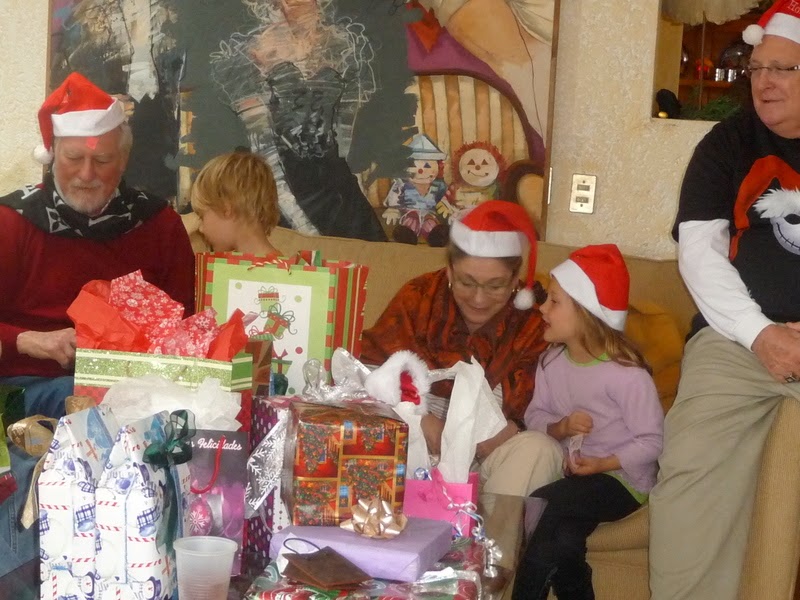 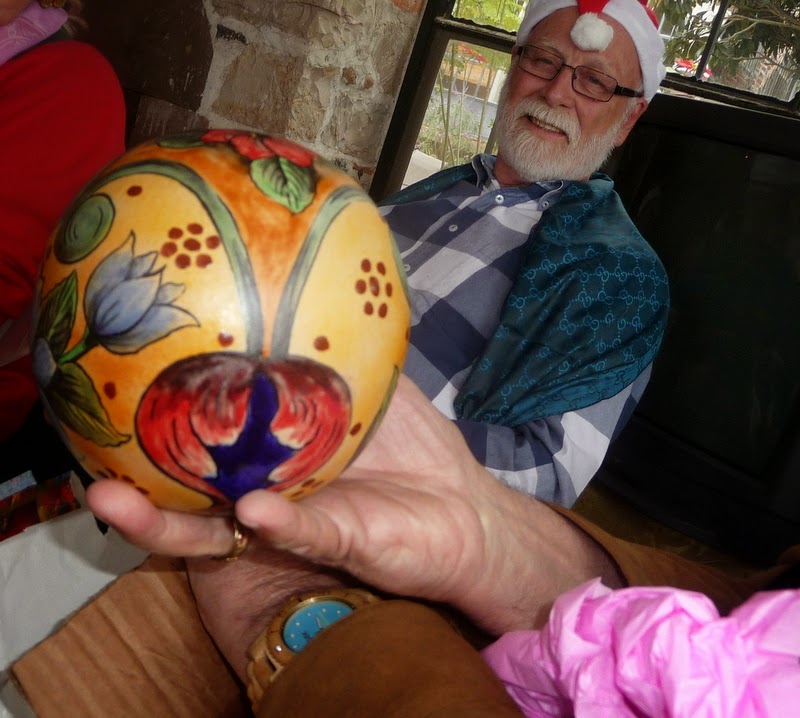 It was still relatively sedate at this point.  Then a few people decided they wanted the gift that the previous person had selected. It became quite hilarious.  Some gifts were swiped with all kinds of pleading from the one who had it, not to take it.  Great laughter ensued.  It's pretty hard to stay mad at someone in a Santa hat............ 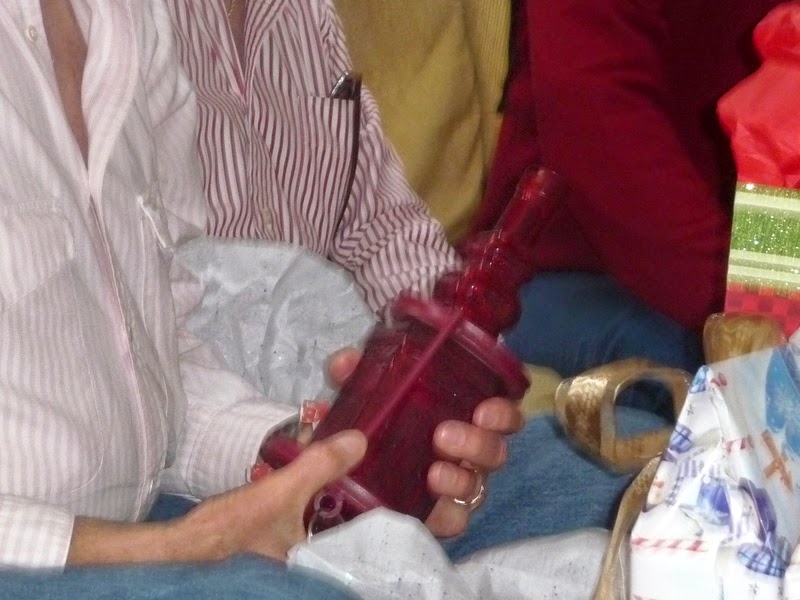 The FIRST person to get the hummingbird feeder was thrilled............ 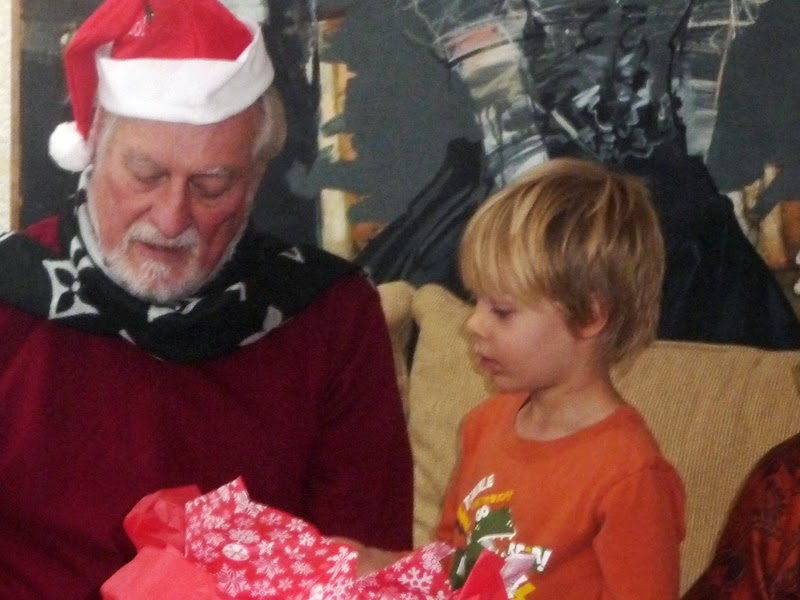 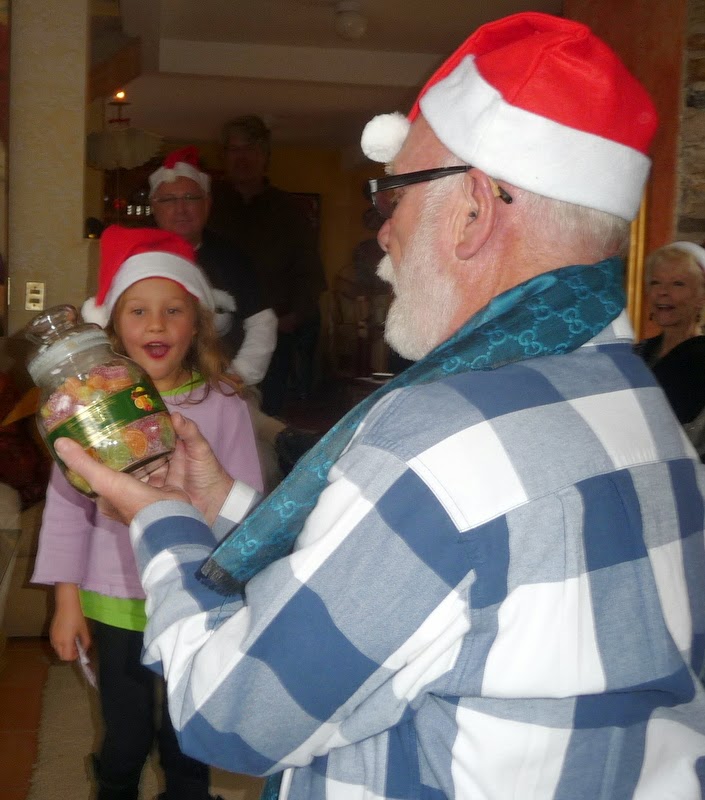 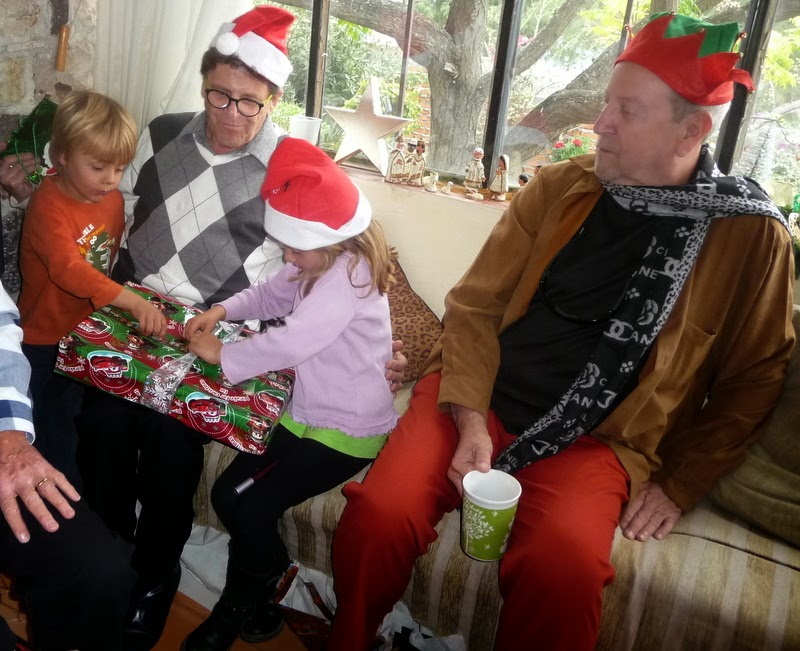 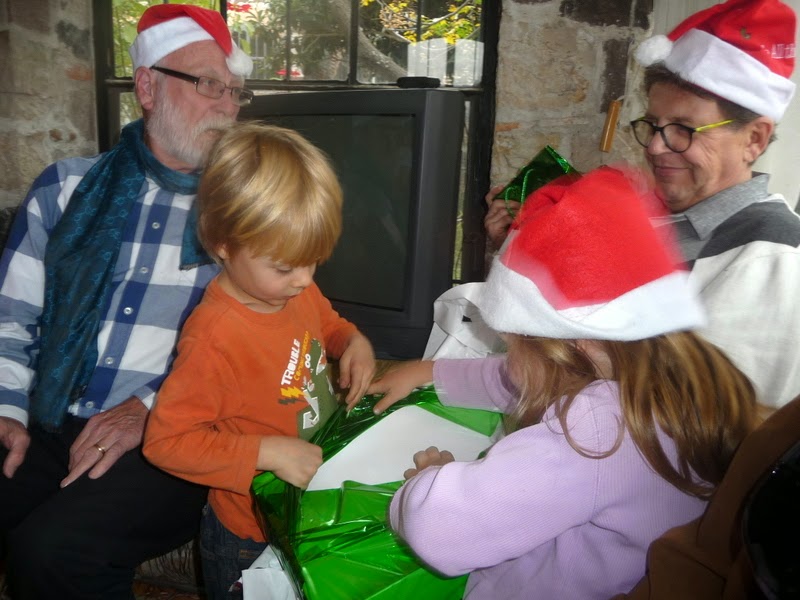 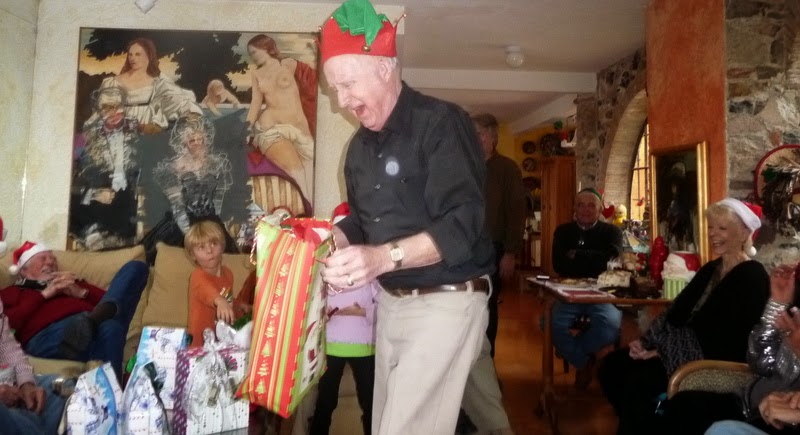 The second person to take the hummingbird feeder was a guest from Seattle, Jerry. 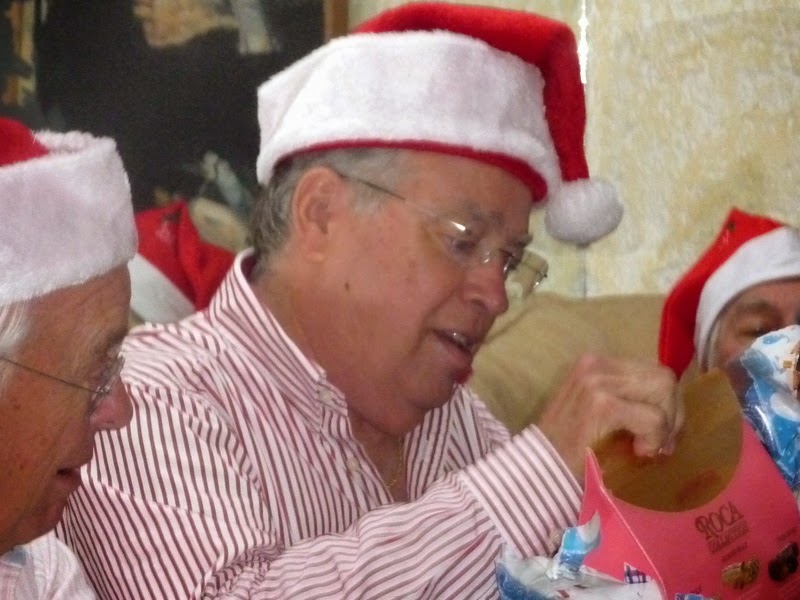 And then, those that had their gifts taken had to select and open another present.  Here's Ron getting candy.

The unthinkable happened, I took the hummingbird feeder from the second person (no photos to prove it) and I got to keep it because of some rule or other.  Woo hoo.

Added to the fun of this, was that my son John brought the children by.  Originally the plan was for them to stay for about ten minutes because it was an "adult" party but somehow, they were so welcomed by everyone and had so much fun helping others open their gifts and ooooohing and aaahing with each recipient, that they stayed for the whole party.

I love the photo of Matilda with BIG eyes when Don opened a giant jar of candy.

A cute story that I didn't know happened was relayed to me by Ron this morning.  Matilda and Sebastian were sitting next to Sheryl, a relative newbie to the group.  When she chose her gift, it seems that Sebastian could hardly contain himself and was bouncing on the couch, very quietly saying "Open it" "Open it"...
Sheryl heard it and asked Matilda and  Sebastian to help her open the gift.  Sweet.

Words can't express how grateful I am for all of these people.  We are a very diverse group.  In our lives, in our beliefs, in where we all come from.  It doesn't matter one bit.  We respect each others lives and revel in the friendship that has grown in the years that this little group has been together.

We started as Dogie, Sue and I.  Over the years it has grown to this.  What a blessing!

At Christmas when we take time to reflect on the message of the holidays, to me, this is what it is all about.

Looks like a good time was had by all - FUN!

Indeed, and the hats start off the silliness!
Feliz Navidad mi amigo.

And there you have it. We need never again look for any other answer to the question: Why do you live in Mexico?

Looks like a wonderful gathering. Merry Christmas to you and yours.

And, Merry Christmas back to you and yours. You have added joy to my life in the past year with your comments. Thanks.

This post made my heart very full, even running over a bit. Thank you for sharing the joy.