Leaving the house this morning, "the trench" looked no different then it did last week when all this "whatever" started - one week tomorrow, matter of fact. 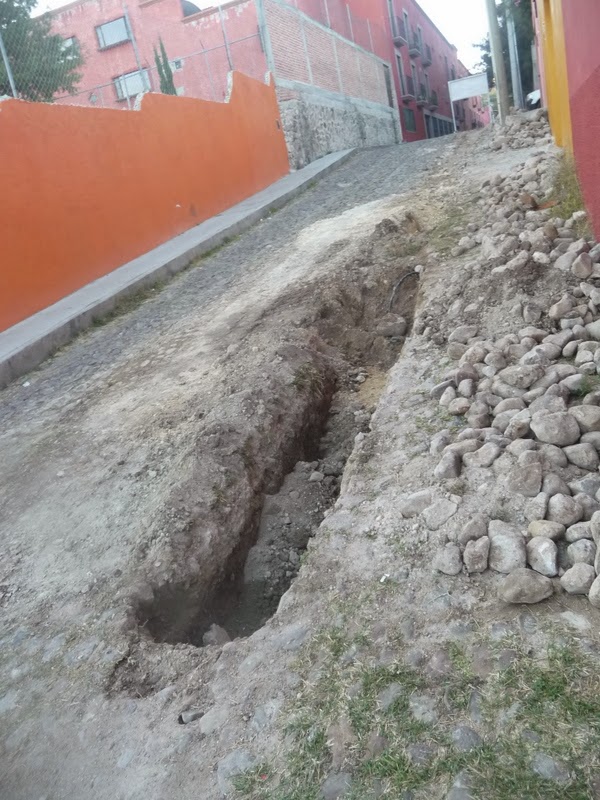 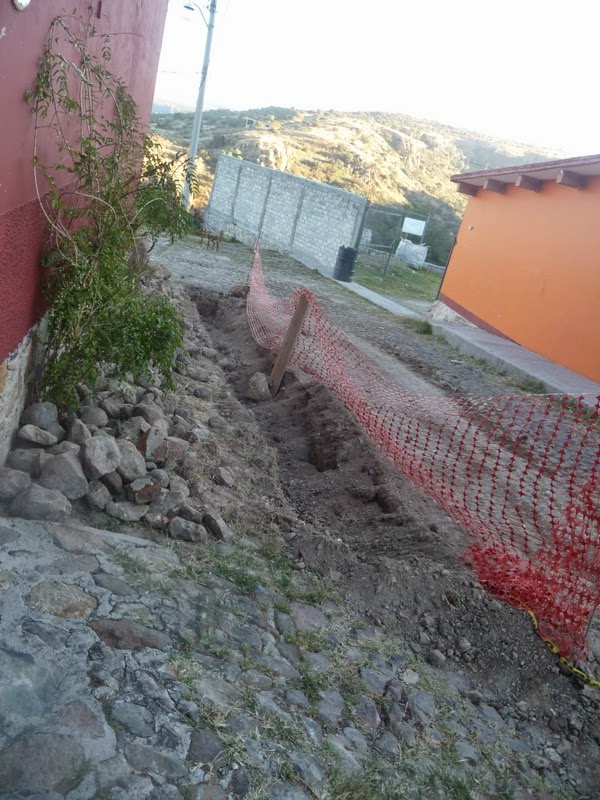 Left at 10:15, returned at 2:30PM.  A HUGE pile of dirt in the middle of the street.  The bulldozer driver was resting.  Guess it was his lunch period.  I backed up the street when I realized I better NOT get near the bulldozer but get closer to the corner with the Pathfinder. 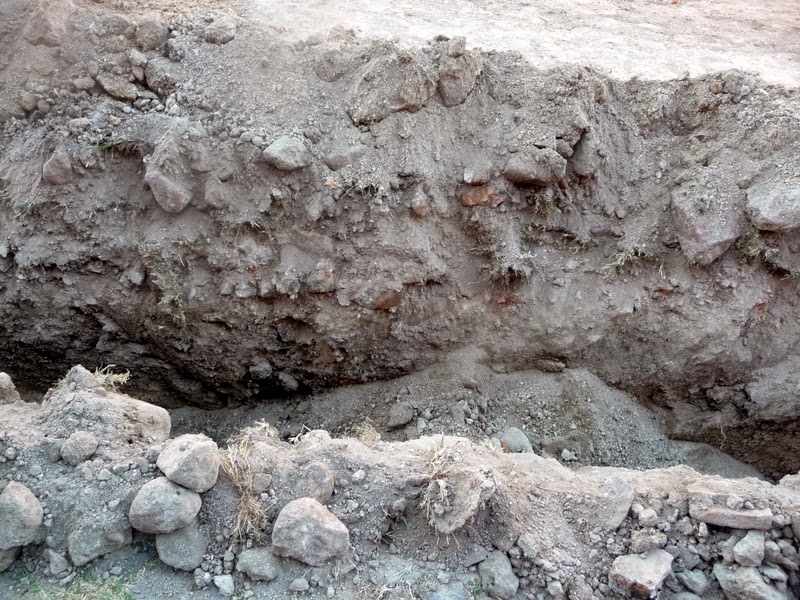 Getting out of the car, it was not quite possible to see down by my house because of the curvature of the street.  Walking down the sidewalk, I was so busy watching so I would not trip or something that I didn't look up until I got close to the house.

When what to my wondering eyes appeared a trench at least seven feet deep and two feet wide with NO access to my front entrance!  Hmmmm.

I turned and started back up the hill trying to figure out how it would be possible to get to my door.  The bulldozer driver was watching.

In the most perfect Spanish that I could muster, it was apparent from whatever I said, that I needed help.
Luckily the lady of the house next door to me and her son came out just about then.  She just kept saying, "Oh Senora, cuidado" (be careful).

It didn't appear that there was any way to walk on the very narrow space between the building and the trench since it was strewn with boulders and rocks from the cobbled street.

The young man from next store took my arm and very, very slowly we made our way to my house.  We moved at a snail's pace.

After thinking about it, and knowing that at 5PM I needed to leave the house again, it was necessary to communicate again with the bulldozer man about how the heck I was going to get over the trench to leave.
I told him I needed to leave.  That I am an abuela (grandmother) and needed to go to the nietos (grandchildren).  Then I gave him some cookies I got at the bakery today.

I'll never know if it was the Grammy thing or the cookies.  Next thing I know, he had found a board.  It was about 8 inches wide and 1 1/2 inches thick that was placed across the trench when I looked out the gate about thirty minutes later.  It was a solution but not a very safe one. Beggars can't be choosers, however.

Again in my most pitiful Spanish, I let him know my age and that my knee was bad and it would be very dangerous for me to cross that board alone.

Lo and behold, when it was time for me to leave, there were two young men digging seven feet down.  As I approached the board, one got on each side of me to hold my hand to cross the trench........the deep, deep hole without me even asking!  Aaah.

Whew, okay then.  That was navigated.  Off I went to my appointment.  The whole time I was gone my thoughts were on getting back in time for someone to help me BACK across the darn board before they left for the day.

Home I was in about an hour.  It was inconceivable what my eyes saw.  Totally.  NO trench.  NO dirt pile.
I mean NOTHING.  It had all been filled in.  It allowed me to walk right into my house.  In ONE hour they had accomplished all that. 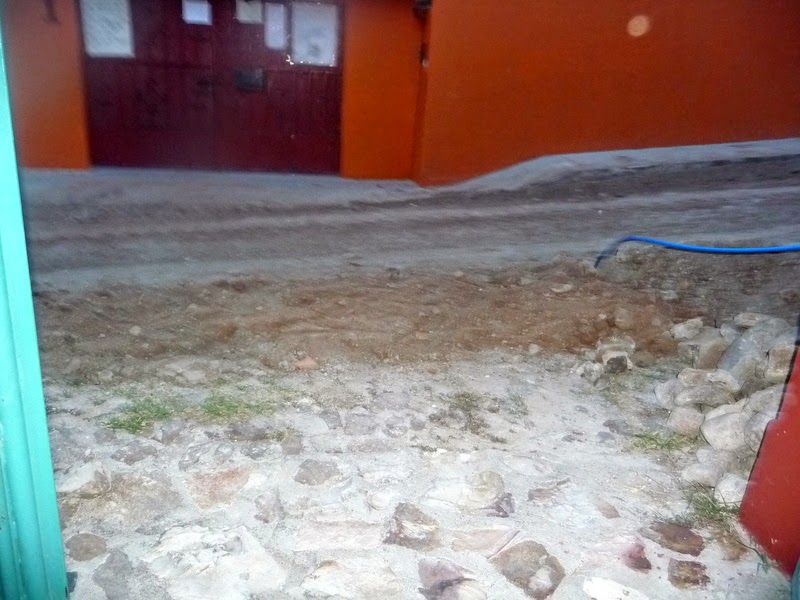 This photo is standing in the garden photographing out to where the trench had been! 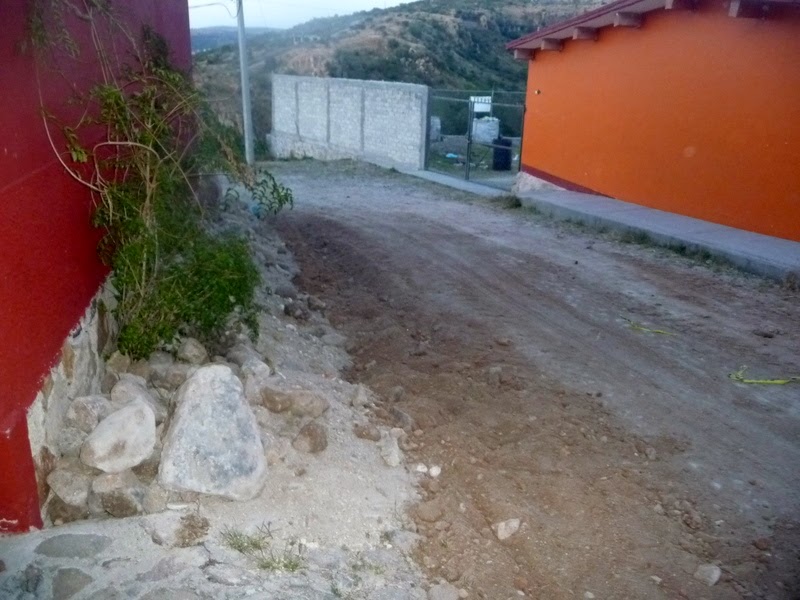 Looking left and then right! 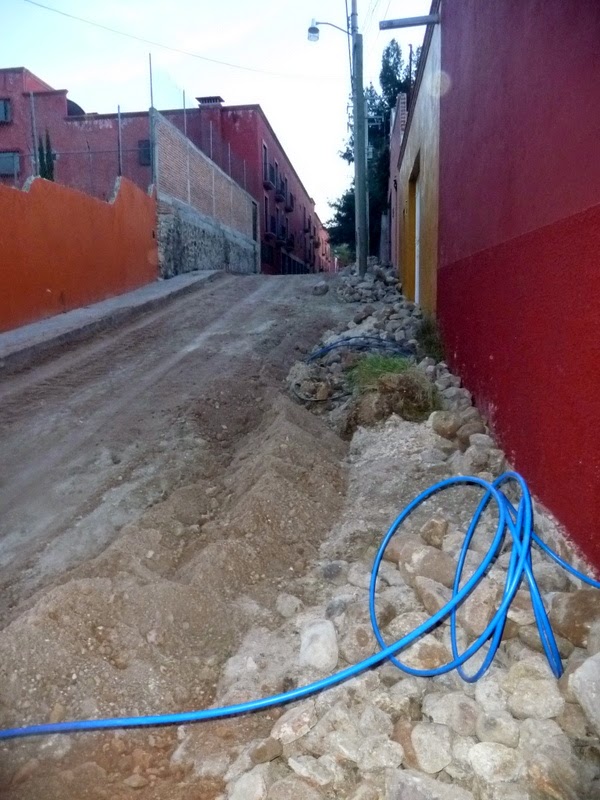 Where the dirt is darker is where the trench was located.  The rocks are the former road.  What the heck that blue tubing is is anyone's guess.  I'm sure we'll all find out tomorrow...........or some day.

Shaking my head, I had to go out and photograph this.  It was so amazing and surreal.  It needed to be documented.

Here I was dreading jumping the trench or walking the plank.  Instead I just walked into the gate like a normal person.

No words to describe my disbelief.  I have been chuckling about this now for about thirty minutes.

Mexico continues to be a mystery and delight to me - even after all these years!
Posted by Babs at 9:46 PM

Thanks Dan. Who knows? Hey, did you get snow?

wow! that last photograph really shows how steep your street is. Of course that is the price one pays for a splendid view. Kudos to you if you are still walking up and down--or even part way.

Christine, that is nothing compared to the street we walk down or cab down or drive down to centro. It is REALLY steep coming up! Ha.

LOL,I love Mexico! Great story Barbara, it made my day.

Thanks Shannon, mine too!

I think all Mexican men have a thing about abuelitas, and will do anything for them. Your telling them you are an abuela did the trick...well, and maybe the cookies too :)

I can't help but wonder how many injuries occur in Mexico each year due to gaping holes and uneven sidewalks!

I not so sure that it was all about being an "abuela", although that certainly helped. In Mexico people will sometimes do things that show total disregard for others... but when they come face to face with the person that was inconvenienced (especially if that person makes a polite request as you did) they will apologize profusely and do everything possible to remedy the situation.

You know, I really wanted to leave a trenchant comment, but I'm drawing a blank.

Kim G
Boston, MA
Where we'd be hoping that handsome construction workers would need to help us into the house for weeks at a time.

P.S.Your site has taken to asking me to prove I'm not a robot.

The blue tubing is new water conduit which is gaining popularity in Mexico. The US has been using it in places for years, easy to use, easy to crimp fitting on the ends and cheaper than the white PVC pipe that requires glue etc.
In the states they have also allowed a different type to be used for gas piping in homes.
Saves a lot of time.

Thanks Tancho, I couldn't imagine what something that small would be used for.

Kim, really, not a robot? How weird that it is doing that....I haven't changed a thing.

So true Bill! I'm still touched by how those men figured out a way to help me the other day.

I just got home from Yoga and found a few neighbors talking on the sidewalk. They are having a pool and the one who gets the exact date ( or the closest to it ) as to when the people from the electric company will do their work will be the winner.
I put $ 50.- on " not this year " and now will patiently wait to see what happens.
It's two weeks tomorrow that the city had to hastily turn off the power for two days to make necessary repairs and still nothing has happened. Si, Mexico querido y lindo...lol !