The State of Healthcare in the USA

This time last year, I heard on talk radio that once 2014 arrived and the Affordable Care Act became law that the doctor offices and doctors would be unreachable.  People would not be able to get appointments.
Health care would go to heck in a hand basket.

Then, on January first, I had a stellar gall bladder attack.  I went to my physician here in San Miguel who did an ultrasound, saw that my gall bladder needed removal.  He suggested that I get to a doctor in the USA and
have it removed as soon as possible.

I didn't have a doctor as I had not been to my former physician in over ten years.  That clinic would not take me as a former patient.  The receptionist said I would have to come in and apply.  My first thoughts were that maybe what I had heard on talk radio was happening!

Then my daughter found a surgeon who came highly recommended.  I called him, got an appointment, and flew to Houston.  Never has anything gone any smoother as far as professionalism, care and recovery.
It was kinda a "bada bada boom""experience.  I flew in on Tuesday, saw the Dr. on Thursday, had the surgery the following Monday and flew home one week later after being seen and released by the Doctor.

Smooth as silk.  That was my experience with Dr. Wallace and his team at St. Luke's outpatient surgery. 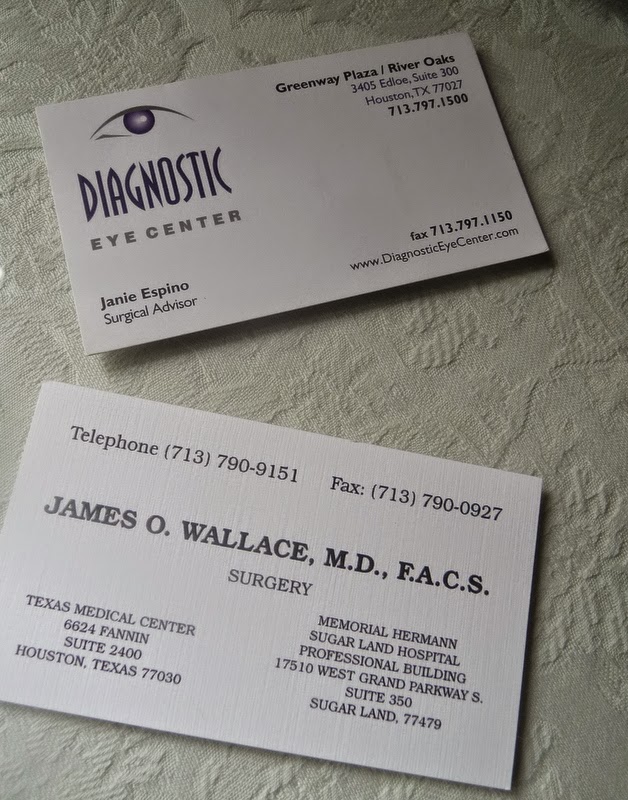 One of the reasons I was in Houston at this time last year was because my eye doctor here in San Miguel had told me I was getting a cataract on the only eye I could see out of - oy vey!   I wanted confirmation from the clinic I had been going to for at least four years.

I had the appointment.  Dr. Welton, who had been the doctor at the clinic that I had been using, said I needed to meet Dr. Marc Sanders who performed the cataract surgery and was a Professor at Baylor.  They both were of the opinion that, at that time, I needed to have the surgery.

Whoa!  I was NOT ready for that.  I had to ruminate on the situation.  I did get a new contact prescription that helped immensely.  As many of you know, then I worried, thought and finally decided as my vision got worse and worse, that I had to go forward with the surgery to remove the cataract.

I made the trip in August to Houston.   Scared to death that I would be returning, possibly, not being able to see.

Wonder of wonders, the team at Diagnostic Eye Center were just as professional as the surgeon for the gall bladder surgery.

With their "point person", Janie Espino, who answered all questions, gave calming comments and scheduled the surgery and follow ups, I felt in more then competent hands.  I let her and Dr. Sanders know that I was
terrified.  They assured and reassured me.

In fact, Dr. Sanders said he would like to do more.  He wanted to use the laser technology that would allow more precise procedures to be accomplished.  He wanted to remove the astigmatism and several other things.  I let go of my fear and let him.  The two surgeries were at the eye surgery facility at the University of Houston Eye center on campus.

I'm still awed by my new vision!  Every morning when I rise, I can't believe I can see so well without glasses, contacts or anything.  Same thing all day. Better then in my whole life. You "see", I've had to wear something or put something in my eye for over 70 years,  I still have the thought that I need to remove my contact lense at night and then say, "Nope, no more".

To top all of this off, I received a hand written thank you note the other day from Dr. Sanders! 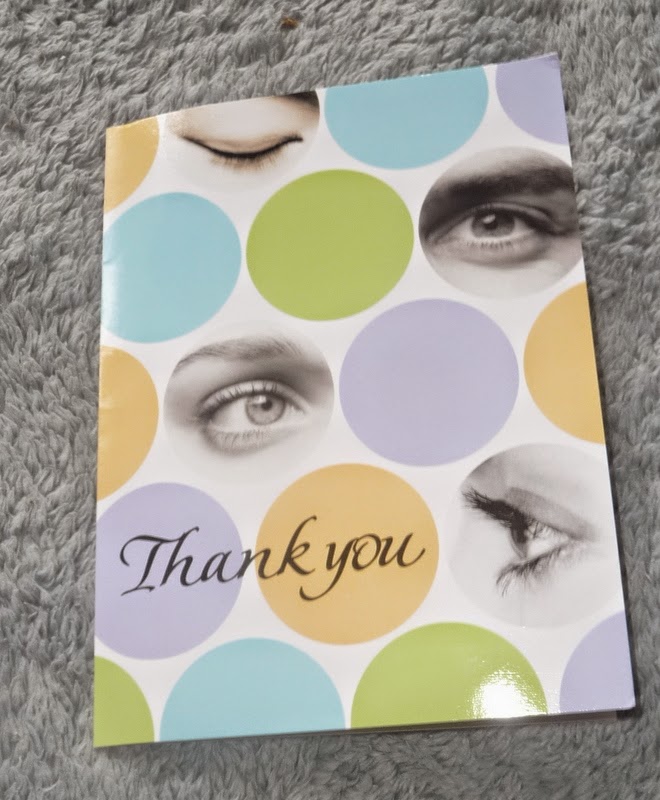 That certainly has not been my experience. 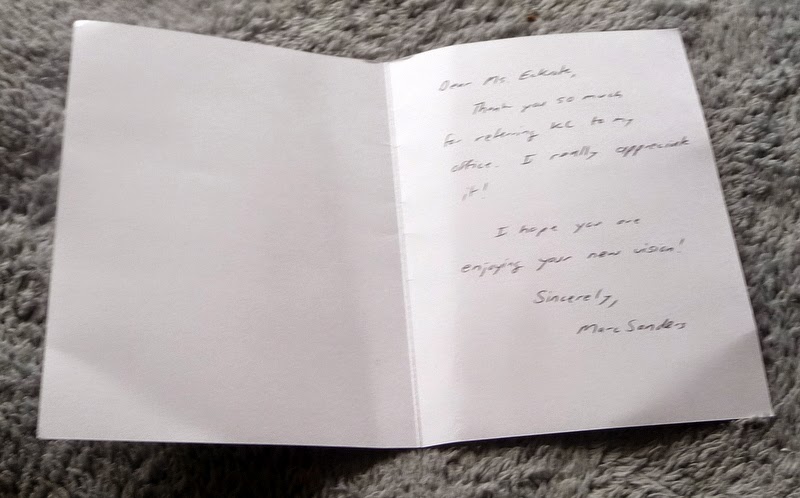 In all my life, in all my need for health care, I've NEVER received a hand written note from a Doctor.
It made my day.

My point is that  healthcare in the USA, at least in my case this year, has certainly been excellent and way over and above what I expected.  The other thing is that Medicare and my supplemental policy paid for nearly every penny.  My drug coverage paid for one medicine which was $1100USD and I only had to pay $117.  Whew, thankfully.

If you are ever in need of eye care, please contact Diagnostic Eye  Center or Dr. Wallace in Houston.  Let them know I sent you as a friend,  I wish you good health...........

I am so happy for you Barbara! I cannot think of much worse that the thought of impending blindness. Are you still making do with just one eye or can they do anything with the bad one?

My friend and fellow BC'er did a recent on Obamacare and the false predictions on it.

Thanks Croft, I'll read it. I have better then 20/20 now in my left eye. I was only able to see out of the right eye as a child. I had amblioplia (I don't know the spelling) and if it isn't corrected by age 13, the nerve from the eye to the brain atrophies. So, no vision, but I don't really miss it cause I haven't had it in a long, long time. It was DARN scary contemplating blindness in the hills and cobblestone streets of SMA! GLAD, so glad that didn't happen.

I've been following your blog for awhile and am curious about something. How do you manage to live in Mexico and have medical coverage in US. Isn't medical coverage effected by being an expat? I'm a dues citizen of Canada and the US and have not registered for medicare as I am covered in Ontario under a universal health care plan. However, I have to be in Canada at least 180 days a year in order to qualify for coverage. If I were to become an expat, I would be required to apply for health insurance or pay for treatments as needed. Could you enlighten me?
tricia.devlin@gmail.com
Thanks, Babs and love your blog.

Hi Patricia,
the same thing happens to me. I am a German living for just under 20 years in Mexico ( working, which at least for now provides me with insurance ).
Since I am over 65 I have the right to healthcare in the EU, not only in my home country , but also have to be in Europe for a minimum of 180 days each year.
Since I will not meet the necessary 30-years of working to qualify for health insurance in Mexico after retirement, I will either have to pay out-of-pocket, or retire in Europe, which I am seriously considering ( but not because of insurance ). I would love to spend my last years in Spain.

Patricia - Medicare is not universal health care. I pay premiums, which are deducted from my social security every month along with paying for the Part B and Part D. Around $250 a month. I could not have Medicare if I had not paid into Social Security for over 40 years, in my case. I receive my social security, no matter where I live and I'm eligible for Medicare as well. I'm in the USA many months out of each year, but, it is not required. One of the biggest customer bases in Houston in the Med Center are ex-pats flying to the USA for top notch medical care. All doctors, etc. know that I live most of the year in Mexico and it has never been an issue. Hope that answers your questions.

Droelma, I wonder if you have looked into IMSS. It costs $300 a year for health coverage in mexico. I know many people in the program and they are very satisfied.

Hello,Thanks a lot for sharing such a good source with all, i appreciate your efforts taken for the same. I found this worth sharing and must share this with all.

Hello,Thanks a lot for sharing such a good source with all, i appreciate your efforts taken for the same. I found this worth sharing and must share this with all.