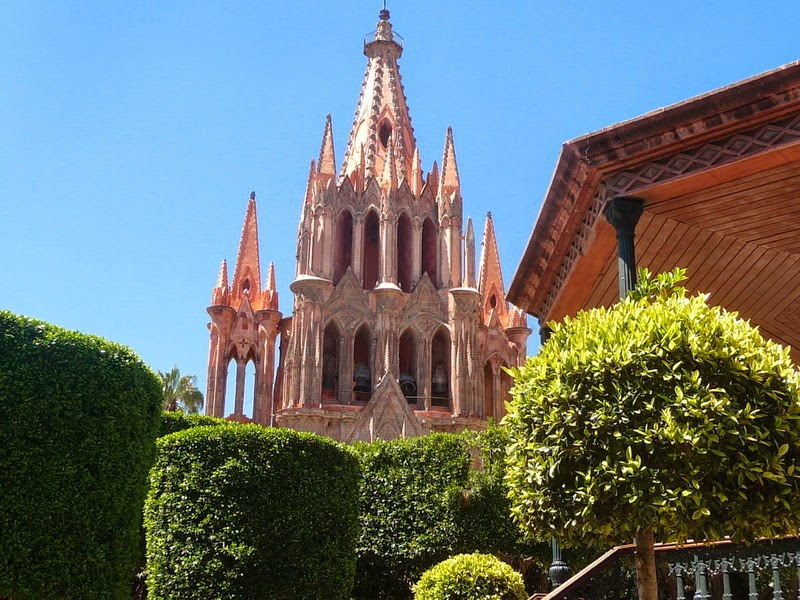 With the designation in 2008 as a UN World Heritage Site, the influx of tourists grew.  Then Conde Nast magazine named it the Best City in the World in January of this year and even more tourists came to see.
Add to the above the fact that the Tourism Counsel of Mexico has focused their in-country advertising on the Colonial Cities with San Miguel at the forefront and it has created a perfect storm.

It became noticeable at Easter this year when it was just about impossible to get anywhere during that time which covers a couple of weeks.

The difference is also the amount of cars!  It is total gridlock on the narrow, one way streets.  Last night there were police officers at each block that headed to the centro directing traffic back up to Salida de Queretaro.
What is usually a 5 minute car ride became 30 minutes!

I think our town is being loved to death!

The Guanajuato International Film Festival which used to be held in Guanajuato with ancillary performances here is now headquartered here in the jardin area, unfortunately.  The area is much smaller then the Guanajuato jardin area and it was chockablock last night.

In my humble opinion, some additional planning needs to be held and possibly this event needs to be where the Guanajuato parking lot is with much, much more space for people to mingle and watch outdoor films.
Then the whole town would not be in gridlock.

OR they need to stop vehicular traffic at the libramento and have shuttles into town.  Something, hopefully innovative, needs to be done.  Antigua, Guatemala and Oaxaca City don't allow vehicular traffic in their centro area.  It is lovely.

After I returned home last night and looked at the San Miguel webcam located with a view of the jardin, it was totally wall to wall people.  It looked like the one time a year that it is that way.  On Independence Day.

For those of you who read this blog know, I seldom write negative posts or rant about things, but one of the criteria of the UN World Heritage site doctrine is the requirement of maintaining the quality of life and the quality of the site that is designated.  Right now I would say that is not happening and has steadily been declining for this year.

Hopefully the powers in charge will do something to rectify this situation before it is too late.  In the meantime, my contribution will be to avoid the centro until things calm down again - hopefully by mid-August!

It's sad that a city is often the victim of its own success. I felt the same way this summer about Barcelona. There is no denying that it is a beautiful city with much to see. But the hordes of tourists there (it wasn't even the peak of the summer season) made it less enjoyable, and there were a couple places that we didn't even bother with because of the long lines.
Mexico has so many lovely colonial cities... it's too bad that the tourists don't distribute themselves more evenly amongst them.
So what is SMA like in the winter? That's when I am usually in Mexico.

Winter, after November 15th, is when we get the snowbirds. Mid-December til the first week of January the town is full! Most locals leave in January for the beach as, to us, it's cold. From Feb 1 on til mid-April the weather is perfect and there are not that many tourists, except at Easter! It's beginning to appear that any time school is out in Mx that we get more tourists - weekends and holidays. Would love for you to come to SMA - hope I'm here.

Thank you for the report, I now have sufficient information to direct people who ask where they should go to see the "real" Mexico. Having SMA being a Pueblo Magico only reaffirms the need for visitors to see the town. Besides there is no bad PR in your state like there is in ours...

Oh Tancho, I so hope you're kidding. PLEASE don't send anyone else here. I think where you live and the State of Chiapas are the two most magnificently beautiful places in Mexico.
I often think "What if I had moved to Patzcuaro"? It was a real consideration. Each and every time I'm in that area I feel as if I've come home. Hard to explain.....

Not to challenge anything you're saying, but last night's webcam -- if it was Saturday -- probably captured the even bigger than usual outdoor movie crowd watching "Around the World in 80 Days".

Cate, I was in that mess last night trying to get a cab home at 10PM. It was very very difficult.

Even the sidewalks are packed with walkers so that one has to walk on the curb or on the edge of street, which was what I did last night in order to get a cab home. IT was truly amazing to see how packed centro was last night again!

Babs - we know your problem in Puerto Escondido where there are a couple times of year (a few weeks where we hole-up)to avoid the crowds and traffic. We just write it off to the price one pays to live in a beautiful place - we resign ourselves to having to share and watch the madness from our balcony.

Yes, Calypso I'm usually pretty tolerant and accepting of that. When I lived across from NASA we knew not to get out on NASA RD 1 around shuttle launch times. It wasn't possible.
The thing that has happened here this year is that from noon on Friday until Tuesday, if Monday is a holiday, everything is gridlock.
I usually just stay home, but sometimes I HAVE to go to centro and then I just grit my teeth as does everyone else. Sorry for my rant.