The "Sistine Chapel of Mexico" - Atotonilco 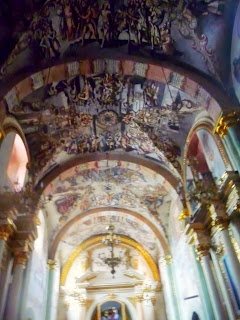 Since 1998, I've traveled to and visited the church at Atotonilco.
Yesterday was the first time that I was able to photograph inside the church.

When I first visited in 1998, most of the frescoes were gone.  It was disheartening.
It was explained that when Fr. Alfaro began to build the church, he built it on top of the thermal springs to prevent "frolicking and fornication". Atotonilco in the Nahuatl language means "the place of the Hot Waters" The springs are still under the building and the wicking of the humidity up the stone walls has year after year destroyed and loosened the frescoes. 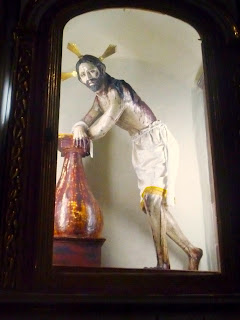 Many statues adorn the sides and front of the church.  None more famous then "Our Lord of
the Column".  He is molded of cornstalks, corn starch and orchid bulbs.  I once read that the statue was made in the area of Patzcuaro with a destination of Queretaro but somehow ended up in Atotonilco.

On his cheek is the symbol of the kiss of Judas.

For the procession at Easter to San Miguel de Allende (which has taken place every year since 1812), the statue is covered completely with a multitude of silk scarves provided by the women of the area.  Once Semana Santa is over, the scarves are removed and used in funerals, weddings and other religious ceremonies throughout the following year.  It is believed they have been blessed.

The Procession of the statue to San Miguel signifies the beginning of Semana Santa.  The Procession of 12 Km. takes all night and arrives at Calle Independencia near dawn where the streets are covered with fennel, chamomile and flower petals along with colored sawdust.  Palm fronds, purple balloons and all manner of banners along with thousands of people wait to welcome Our Lord of the Column. 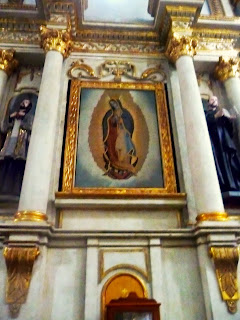 The participation of this Church in the War for Independence is shown with the painting of Our Lady of Guadalupe.  Fr. Hidalgo rode his horse to Atotonilco to get the banner of Our Lady to ride to Delores Hidalgo to meet with all that would participate in the Battle. In addition, Allende, another of the war heroes and the man that is honored in the name San Miguel de Allende was married in this church. 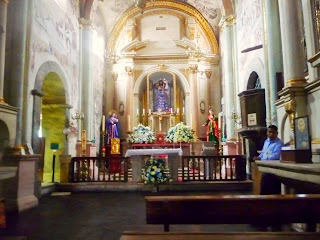 Above is the main altar. Much gold gilding, many statues and ALWAYS flowers. To the left side is a smaller altar which we could not access as it and two other areas of side altars are in the process of restoration. 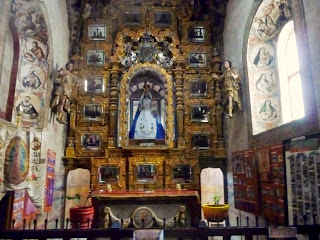 To the right is this altar in honor of the Holy Mother.  Again much gold from the mines in Valenciana near Guanajuato.  All the framed mirrors are reverse painted images.  To the left of this altar is a banner that is a replica of the one carried by Fr. Hidalgo. 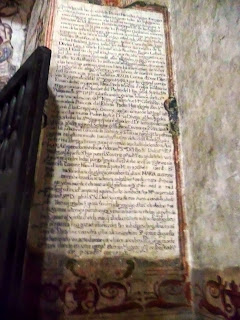 Besides the frescoes of images, there was also much written on the walls.  Some of it in Spanish and some in Latin. 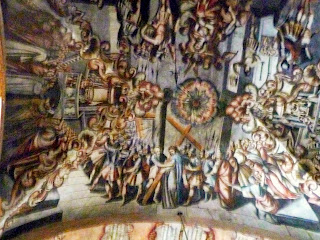 There are more frescoes in this church then any other church in the World, I was told by the restoration architect many years ago.  Even more then the Sistine Chapel.  It makes sense that the images were important to tell the stories of the Bible since the indigenous were not educated and could not read. 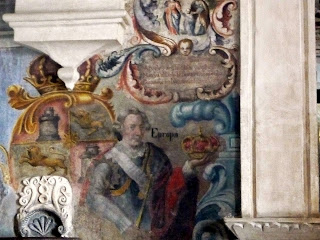 Interestingly, on four sides of the entrance, there was homage paid to Europe and the King of Spain.  Also to Asia and Africa which I did not photograph.  They were in a dark corner. 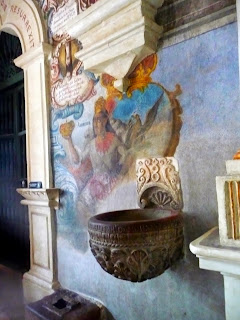 This is the homage to America with an indigenous Indian in the fresco. 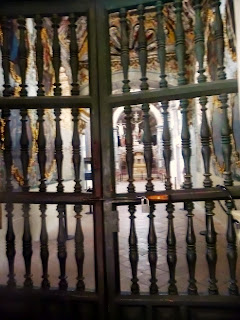 Two of the restored side altars are under lock and key with a large group of pews in front of the gates to prevent one from even getting close to photograph through the bars.  I have, in the past, been in that room.
There is a fresco of San Miguel de Allende from the 1700's on the left wall.

It's hard to believe, but it is said that all these frescoes were painted by one man. He was the celebrated artist D. Felipe  Miguel  de Martinez de Pocasangre from Queretaro.  He worked during the period from 1740 - 1777 in the church. There are some paintings also by Mexican artists Juan Correa and Miguel Cabrera.

I have written about Atotonilco or mentioned it in posts fifteen times throughout the years.  Pilgrims from all over, especially Latin America and Central America come to worship here.  It is the third most visited religious site in Mexico. The shrine of Our Lady of Guadalupe and Chalma are one and two.

After fifteen years of visiting this Church, it was wonderful yesterday to finally be able to record the interior visions of this UN World Heritage site.

Beautiful! These gorgeous churches almost make me want to convert to Catholicism!

I WAS raised Catholic but haven't practiced that faith in 37 years.

They are still beautiful to see for the craftsmanship of the indigenous peoples who did all the work!

How were you able to photograph in there? I recall that photos were not allowed. Did they change the rule? Great pictures. Thanks for sharing.

NOW it just says "No flash"! There was no service and no one except the one guard. If there had been any kind of service or people praying in the church, I wouldn't have photographed. It was raining lightly and so no turistas!

Beautiful shots you took there.

I had to chuckle at the revenge of the thermal spring though. I'm not sure building over it was such a wise idea.

Kim G
Boston, MA
Where the puritans would understand the desire to cover over such a spring.

There is also a fascinating order to the frescoes - from the damned that hover around the entryway progressing to greater righteousness until arrive at the altar. You did a great job of capturing the diversity of the art.

Kim, having been raised Catholic, I was irritated when I first heard that Fr. Alfaro covered one of the springs and then of course, began the practice of self-flagellation. He took all the fun out of their frolicking and fornication, obviously.

Steve, I took the photos willy nilly and never realized what you just told me.........very interesting.

Great bit of art history or history depicted by art there - Thanks for taking us along - well done!

Thanks Calypso. Every time I go to these churches I sit and marvel at the architecture. Had I not read Ken Follett's book, The Pillars of the Earth which discusses church building in Europe starting in the 11th century, I would think these soaring sealing impossible. Still an extraordinary feat as is all of the frescoes!

We went via San Miguel Viejo not realizing Atotonilco was just off the highway to Dolores Hidalgo. About 10 blocks before the church there is a very old small chapel that we couldn't find the history of.

This is an absolutely wonderful post of history and photos. From all of my years of going to Mexico when I was young, this is what I remember loving the best. The churches and seeing some of the processions of the virgencitas. Zapopan near Guadalajara is the one I remember most.

Sparks - If you were going from SMA to Delores and the chapel was on the right side of the road prior to getting to the turn to Atotonilco, that chapel is used for the procession of Our Lord of the Column. The people walking with the statue stop there to rest during the night.
There is a whole tour of the chapels of the indigenous that I've not gone to but hopefully one of these days....

Angelinem - I was lucky enough to be in Zapopan back in the early 80's when there was a procession of the Virgen statue from church to church. I think it was one of the first processions that I ever saw in Mexico!

I was raised Catholic too Babs and I was there yesterday:) Not sure how we missed each other but great post. This church was beautiful.

Susan, sorry we missed each other. I was there Wednesday morning and we were the only people there!