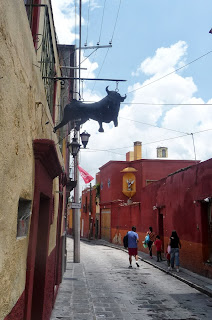 In 2003, Bon Appetit produced a  Collector's Edition called, " The Soul of MEXICO".
It is a treasure from cover to cover.  Something I've used over and over as
I traveled throughout Mexico.

The editors included a Restaurant Directory of the "best".  In San Miguel some of the best were Chamonix, El Petit Four, Ole' Ole' among others.  All of which I patronized at the time and still do today.

In other cities, Ole' Ole' was in the company of fabulous places such as El Naranjo in Oaxaca; Casa del Conde in Valenciana, Guanajuato; Gaia in Cuernavaca and Izote in Mexico City.  In other words, some of the best of the best.

I've enjoyed exploring the list along with still enjoying Ole' Ole' each time I dine there.

It's funky, it's fun, quite delicious and totally unpretentious.  MY kind of place.

It's one of those old fashioned kind of places where the family lives in the back and the restaurant is in the front.

In this case, the owner was a former matador.  Hence all the bullfighting kitsch.  It is a one of a kind place.

I have to admit it has been a couple of years since I had been there.  Instead of fajitas pollo being 60 pesos, they are now 85 pesos.  Around $6.50 US!  It's corn or flour tortillas.  All the sides and a pounded chicken breast that is seasoned well, tender and juicy.  Enough food for two to three tortillas.

It was as delicious and delightful as always.  The best fajitas in San Miguel.

Even though it had been two years or more the same waitress was there and she remembered me! 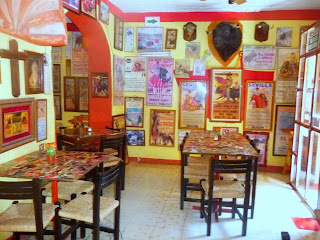 You could spend an hour just looking at the posters, plaques and photos. 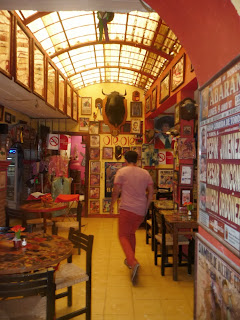 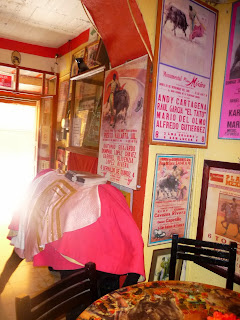 And then, a stuffed bull.  What can I say?
At least its not a stuffed chicken? 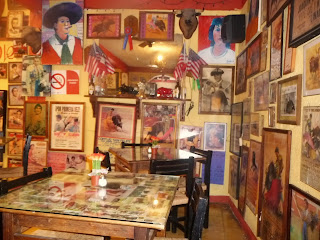 If you're interested in going there you won't regret it.
Near the artisans market on Loreto.  Look for the black bull sign as you come down the street.
They are open from 1PM til..........

Oh it is such a fun place with great food. Remember when Carmen drove us there in her little car with the other B&B guests? Hilarious. Is she still there? Playing croquet?

Kay, I had forgotten that! There were five of us in a VW Bug - two of which were big men! THAT was funny and we walked back to the B&B just to save ourselves from another ride!

I've yet to eat there, although I have heard from so many people that it is really good. I'm a little put off by all the dead animals, I guess, but perhaps it's time I got over that and gave it a try.

I've been thinking about Ole and now this settles it. I have to go. It has been a while but the fajitas and margaritas were always wonderful.

The shrimp there is out of this world. Fabulous place!

Maybe we should have a group meal there. Todd and Shannon, Billie, me, Dean and anyone else who wants to go........When I used to bring tours to SMA, they could handle 24 people without a hitch! Glad to know others enjoy it as much as I do.
Dean, I've never had the shrimp!