Life in Mexico - "Go with the flow" 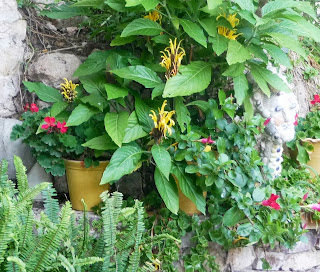 These photos of the candelabra plant remind me of how well I do living in Mexico by "going with the flow."  You see, each season I hack this thing back to a stump hoping it won't make it and each year
it comes back stronger and stronger.  There are lots of lessons to be learned from that. 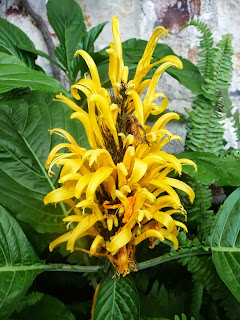 I've decided to love the plant for the joy the hummingbirds get from the nectar in each and every one of the blooms on the stalk.  The power of positive thinking. 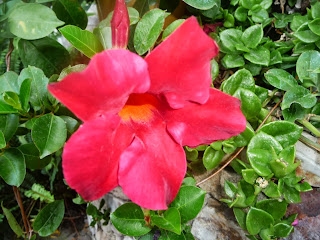 This is a mandevilla.  For years, literally years, I tried to cultivate this flower in Houston.
Always to no avail.  Here they run rampant.  Patience pays off.

I tell you this because I've been in a situation for three weeks that has tried my patience to the nth degree.  The situation is called Megacable.  They are one of the providers in town of cable and internet services.

I haven't had a problem with service since I signed up last August - almost a year.  However, when someone moved into the guest house for a short stay, it went downhill.  This person unplugged the modem to ask me a question and even though it was reconnected, there has been intermittent internet since then.

Oh yes, I went to the office.  Explained the situation.  They said they would send someone between the hours of...........never showed.  Finally, I took the modem in for an exchange.  That took more then 30 minutes to complete as Megacable and most of Mexico is BIG on paperwork.  You would have thought I had asked for a loan of $30,000USD.

Yesterday was the final straw.  After scheduling another service call, which was scheduled from 9-2, I , of course, was here every second.  No show.  Called, they rescheduled for between 4-7 because the techs needed to have lunch from 2-4.  No show.  At 7 I called and got a woman who said I had never paid my bill and that was why I had intermittent service.  Lordy, I nearly lost it.  The bill is paid until October.  I explained this to her - again to no avail.  Her final response was that I would have to go in today and show receipts to someone to reschedule for service.

My patience is thin as is my attitude.  I'm going to meditate so that when I DO go into Megacable again today for the fourth time in three weeks, I don't make a fool of myself.  Or frighten unsuspecting people.

My mantra will be "Go with the flow".  It is one of the lessons of life in Mexico.

We have MegaC here in Xico. Honestly it does take a wee bit of expertise to maintain the connection. 'Wish we were closer I would come and help.

It should not be this way - but the entire process of 'getting connected' has some technical abilities attached to it.

Now the Internet has become nearly a necessity in most homes - and yet there are still these nagging technicalities.

Eventually it will be like the home telephone install and use was for many years (before cell phones).

There are tricks to 'excite' the connection and methods to determine where the problem most likely is - but of course it should be better than that.

We remain fans of MegaC as opposed to Telnet (Telmex) - we have had both - and both have their bad days....

calypso said...
This comment has been removed by the author.
9:40 AM

Speaking of errors - why did my comment post twice? LOL - The batteries in my mouse went faulty! Bottom line - it is all done with smoke and mirrors. ;-)

It sounds like a reprise of last summer. You will do fine.

Yes, Steve sort of. I was at Megacable first thing this morning. Javier, the ONLY English speaking employee greeted me and found out that of course I had paid the bill and that I was scheduled for a service call today. I made a beeline home dismissing all that I had planned to do. Hopefully they'll show up!

Calypso, thanks for your encouragement. Actually in 12 years in my house I've never had a problem with Telmex. However, for some reason when I initially got a Telmex wifi modem, neither Steve C.nor I could get it to work last year so I returned it and went to the dreaded Megacable.
Today I found out that the one sane contact at Megacable is leaving in August. I'm going to find somewhere else to move to. Enough already.........

Hmm...it mus be something in the air targeting Aries...you have had the same kind of couple of weeks I have had.

Kay, how funny you should say that. Today I read an astrological chart that said this is a time for Aries to stay away from anything electronic - don't even buy cell phones. Pretty funny.........

Barbara, you are doing better at remaining calm than I would be. I hope it is "fixed" by now.

Nope. I was assured this morning at Megacable that they would be here today. I dashed home and for the 4th time, they did NOT show up......
I'm so disgusted that I'm not even mad anymore. Hopefully I can set something up with Telmex on Monday....