Smither Park - A Visionary Park of Memories and Folkart 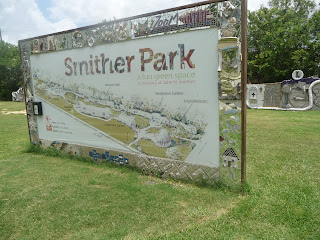 L
Last week I was lucky enough to get to see an emerging park in Houston.  My friends Barb and Marks Hinton, of publishing fame, took me.  It's right out on Munger off the Gulf Freeway next to the Orange Show of Visionary Art. If you don't know what the Orange Show is, and I found a few don't, this group sponsors the Art Car Parade every year.  They also oversee the monument that Jeff McKissick built in honor of the orange.  Google Orange Show and read all about it.  It is quite a place and a great group of fun loving people are involved in the Eyeopener Tours along with zillions of other endeavors. 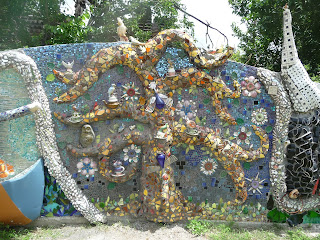 Another friend Stephanie Smither has donated the land to build the park in honor of her late husband, John Smither.  John was a huge folkart enthusiast and served on the board of the Orange Show.  I met John years ago while taking a continuing education course in folkart and outsider art at Rice University.  It was obvious that he was extremely knowledgeable on the subject.  He and Stephanie's collection is world renown.

I cannot begin to tell you how enthused I was once I saw the Memory Wall being made by everyday citizens, not necessarily trained artists.  After all that is what outsider art is, untrained artists.  I could go back over and over to look at the details installed in each person's vision.  Each unique in its own way.  The above photo is a Tree of Life.  The Orange Show is overseeing the development along with Dan Phillips of Huntsville who is overseeing the Memory Wall.

I tried to download lots of photos to show you but for some reason I could only get these two.to post   The top is the planned park which encompasses eight lots.   Plenty of room for an outdoor pavilion, walking paths and the memory wall that extends the length of the property.  It is beyond cool.

In fact my mind is whirling about where in San Miguel, I can build a small memory wall.....or maybe not so small.  We'll see.

If you're in Houston, go see it.  It's in its infancy stage but look at the wall and marvel at the use of shells, broken mirrors, bones, marbles, tiles and other objects of special meaning.

Great idea to build a memory wall in San Miguel!

I love the memory wall idea. I think it would go along wonderfully with the recent (and ongoing) mural painting here in San Miguel.

I have been contemplating trying to contact you, I know that your many fans must constantly try to do so. After reading this post, however, I simply had to.

I had the pleasure of meeting Stephanie Smither on a trip to the South of France. We stayed, with mutual friend Ben Stevenson, in a gorgeous home in Lambesc. Learning to play a game called "liars dice" and visiting an artist called Jacquie with her were the highlights of my trip. Stephanie has the poise and tenacity that I only hope to achieve.

I am an enormous fan of SMA and plan to move there this Summer. When I do, it would be an honor to meet you.

I hope that you receive this comment. I have only recently discovered your blog and I am working my way through it backwards. I can't tell you how much I enjoy it. Please feel free to contact me, if you'd like. kayleb.mckelvain@gmail.com. Or maybe I will just see you around the Jardin.

Dear Kayleb - Thanks so much for taking time to write on the Smither Park post!
Stephanie is indeed a lovely and tenacious woman.
I'm sure your time in France with her was a delight.
Let me know when you arrive in San Miguel, via the blog and we can connect for sure.
Again, thanks for commenting and letting me know that you enjoy the blog.